Cuba has had a socialist political system since 1959 based on the "one state – one party" principle. Cuba is constitutionally defined as a Marxist–Leninist socialist state guided in part by the political ideas of Karl Marx, one of the fathers of historical materialism, Friedrich Engels and Vladimir Lenin. Despite being regarded as a Communist state, the ideology of José Martí is what serves as the main source of influence in Cuban politics. [1] [2] The present Constitution, which was passed in a 2019 referendum, [3] [4] also describes the role of the Communist Party of Cuba to be the "leading force of society and of the state" and as such has the capability of setting national policy. [3] [4] The 2019 Constitution also made not only the ideas of Marti, but also those of Fidel Castro superior to those of Marxism with regards to influence over the Cuban Communist Party and Cuban society. [5]

The most recent leader was Raúl Castro, who held the title of First Secretary of the Communist Party of Cuba, the most powerful position in Cuba. [6] As of 2019 Miguel Díaz-Canel is now the President of Cuba and is likely to succeed Raúl Castro as First Secretary in 2021.

Executive power is exercised by the Government, which is represented by the Council of State and the Council of Ministers. Legislative power is exercised through the unicameral National Assembly of People's Power, which is constituted as the maximum authority of the state. With effect from 19 April 2018, Miguel Díaz-Canel is President of the Council of State and President of the Council of Ministers (sometimes referred to as the Prime Minister). The previous president, Raúl Castro — brother of former leader Fidel Castro — remains First Secretary of the Communist Party of Cuba, and Commander-in-Chief of the Revolutionary Armed Forces. Fidel Castro ruled from 1959 to 2006 before illness forced him to hand power to his brother. Esteban Lazo Hernández is President of the National Assembly.

Executive power is exercised by the government. Until February 2008, Cuba was led by President Fidel Castro, who was Chief of State, Head of Government, Prime Minister, First Secretary, and Commander in Chief of the Cuban armed forces. The Ministry of Interior is the principal organ of state security and control.

According to the Cuban Constitution Article 94, the First Vice President of the Council of State assumes presidential duties upon the illness or death of the President. On July 31, 2006, during the 2006 Cuban transfer of duties, Fidel Castro delegated his duties as President of the Council of state, first secretary of the Cuban Communist Party and the post of commander in chief of the armed forces to first Vice President Raúl Castro. Since 2019, the President of Cuba is also limited to two five year terms. [3] [7] [8] [9] [10] [11]

Cuba has an elected national legislature, the National Assembly of People's Power (Asamblea Nacional del Poder Popular), which has 612 members, elected every 5 years and holds brief sessions to ratify decisions by the executive branch. The National Assembly convenes twice a year in ordinary periods of sessions. However, it has permanent commissions to look after issues of legislative interest. Among its permanent or temporary commissions are those in charge of issues concerning the economy, sugar industry, industries, transportation and communications, constructions, foreign affairs, public health, defense and interior order. The National Assembly also has permanent departments that oversee the work of the Commissions, Local Assemblies of the People's Power, International Relations, Judicial Affairs and the Administration. [12]

Article 88(h) of the Constitution of Cuba, adopted in 1976, provides for citizen proposals of law, prerequisite that the proposal be made by at least 10,000 citizens who are eligible to vote. In 2002 supporters of a movement known as the Varela Project submitted a citizen proposal of law with 11,000 signatures calling for a national referendum on political and economic reforms. The Government response was to collect 8.1 million signatures to request that Cuba's National Assembly enact a constitutional amendment making socialism an unalterable feature of Cuban government. [13]

Committees for the Defense of the Revolution

The Committees for the Defense of the Revolution is a network of neighborhood organizations across Cuba and most Cubans are members. [14] The organizations are designed to put medical, educational or other campaigns into national effect, and to report "counter-revolutionary" activity. It is the duty of the CDR officials to know the activities of each person in their respective blocks.

Main articles: List of political parties in Cuba and Elections in Cuba

Suffrage is non-compulsory and is afforded to Cuban citizens who have resided for two years on the island. Such citizens must be aged over sixteen years, must not have been found guilty of a criminal offense, and cannot be mentally handicapped. Cubans living abroad are denied the right to vote. The national elections for the 612 members [15] of the National Assembly of People's Power are held according to this system and the precepts of the 1976 Constitution.

Cuba's foreign policy has been scaled back and redirected as a result of economic hardship after the collapse of the Soviet bloc. Without massive Soviet subsidies and its primary trading partner Cuba was comparatively isolated in the 1990s, but has since entered bilateral co-operation with several South American countries, most notably Venezuela and Bolivia. Cuba has normal diplomatic and economic relations with every country in the Western hemisphere except El Salvador and the United States. El Salvador, under the new government of Mauricio Funes, is expected to institute both in June, 2009. [20] The United States continues an embargo "so long as [Cuba] continues to refuse to move toward democratization and greater respect for human rights." [21] The European Union accuses Cuba of "continuing flagrant violation of human rights and fundamental freedoms", but also "Reiterates its condemnation of the US embargo on Cuba, and calls for it to be lifted forthwith, as the UN General Assembly has repeatedly demanded." [22]

Cuba has developed a growing relationship with the People's Republic of China and Russia. In all, Cuba continues to have formal relations with 160 nations, and provided civilian assistance workers – principally medical – in more than 20 nations. [23] More than two million exiles have escaped to foreign countries. Cuba's present foreign minister is Bruno Rodríguez Parrilla.

Officially, Cuba is a people's democracy, as opposed to the "liberal democracy" of Western states. Cuba thus rejects criticism of its political system as a lack of apprehension for different forms of democracy other than those in capitalist states. [24] It alludes to the grass roots elements in the nomination of candidates at neighborhood level (in the so-called circunscripciones). [25]

Opposition groups inside and outside the country as well as international NGOs [26] and foreign governments have described the Cuban political system as undemocratic. The United States Government has initiated various policy measures; these have been ostensibly designed to urge Cuba to undertake political change towards a multi-party electoral system. These plans have been condemned by the Cuban Government, who accuses the United States of meddling in Cuba's affairs. [27] Those who see Cuba as a democracy have described it a grassroots democracy, a centralized democracy or a revolutionary democracy. [28]

Cuba is the only authoritarian regime in the Americas, according to the 2010 Democracy Index. Cuba's extensive censorship system was close to North Korea on the 2008 Press Freedom Index. [29] The media is operated under the Communist Party's Department of Revolutionary Orientation, which "develops and coordinates propaganda strategies". [30] According to Maria Werlau, the extreme concentration of power to the Castro family seems comparable in modern times only to that of North Korea under the regimes of Kim Jong-il and Kim Il-sung. [31]

According to Human Rights Watch, Castro constructed a "repressive machinery" that continues to deprive Cubans of their basic rights. [32] The Cuban government has been accused of numerous human rights abuses, including torture, arbitrary imprisonment, unfair trials, and extrajudicial executions (a.k.a. "El Paredón"). [33] Human Rights Watch reports that the government represses nearly all forms of political dissent. There are many restrictions on leaving the country. [34]

The country's first ever transgender municipal delegate was elected in the province of Villa Clara in early 2013. Adela Hernández is a resident of the town of Caibarién and works as a nurse electrocardiogram specialist. In Cuba, delegates are not professional politicians and, therefore, do not receive a government salary. [35]

The 2012 Transparency International Corruption Perceptions Index ranked the Cuba 58th out of 176 countries, tied with Jordan and Namibia. [36] and therefore has lower levels than most of the other countries in the Caribbean and Central America. Also ranked in 112th place in 2006, tied with India. 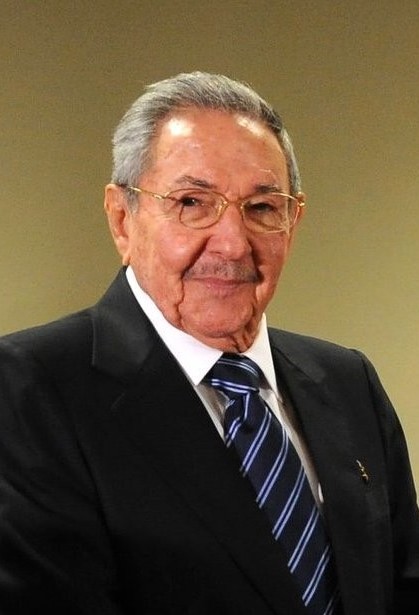 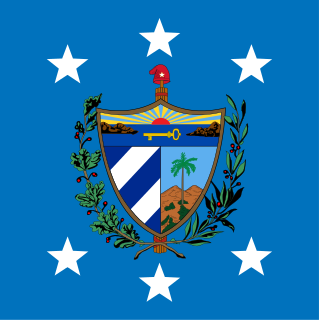 Elections in Cuba involve nomination of municipal candidates by voters in open ballot nomination assemblies, nomination of provincial and national candidates by candidacy commissions, voting by secret ballot, and recall elections. Under the national constitution, Cuba is a socialist democracy, with the Communist Party of Cuba as the "leading force of society and of the state", although elections are nominally non-partisan.

The 2006–2008 Cuban transfer of presidential duties was the handover of the title of president and presidential duties from longtime Cuban leader Fidel Castro to his brother Raúl Castro, the next-in-line-of-succession person in Cuba, following Fidel's operation and recovery from an undisclosed digestive illness believed to be diverticulitis. Although Raúl Castro exercised the duties of president, Fidel Castro retained the title of President of Cuba, formally the President of the Council of State of Cuba, during this period.

The Cuban Revolution was the overthrow of Fulgencio Batista's regime by the 26th of July Movement and the establishment of a new Cuban government led by Fidel Castro in 1959.

Juan Esteban Lazo Hernández is a Cuban politician who has been the President of the National Assembly of People's Power, Cuba's parliament, since 2013. Previously he was Vice-President of the Cuban Council of State. He is a member of the Politburo of the Central Committee of the Communist Party of Cuba since 1980 and National Assembly of People's Power member since 1981.

An indirect presidential election was held in Cuba on 24 February 2008, in which the National Assembly of People's Power elected a new President of Cuba and the members of the Council of State. The election followed the January 2008 parliamentary election. In the election, Raúl Castro, who had been Acting President since July 2006, was elected as President, succeeding his older brother, Fidel Castro.

José Ramón Machado Ventura, M.D. is a Cuban revolutionary and politician who was the First Vice President of the Council of State of Cuba from 2008 to 2013. With the election of Raúl Castro as President of Cuba on 24 February 2008, Machado was elected to succeed him as First Vice President. He has been Second Secretary of the Communist Party of Cuba since 2011.

The following lists events that happened during 2016 in Cuba.

Parliamentary elections were held in Cuba on 11 March 2018 to elect members of the National Assembly of People's Power. Prior to the elections, President Raúl Castro declared he would not be seeking a new term, and a new President of the Council of State will be elected by the National Assembly. His deputy, Miguel Díaz-Canel, was subsequently elected as the new president. However, Castro remained the First Secretary of the Communist Party of Cuba, the most senior position in the country.

The following lists events that happened during 2013 in Cuba.

Salvador Valdés Mesa is a Cuban politician and former trade union leader. He is the First Vice President of Cuba since April 2018 and is a member of the Political Bureau of the Communist Party of Cuba.