The Polonaise in A♭ major, Op. 53 (French : Polonaise héroïque, Heroic Polonaise; Polish : Heroiczny) for solo piano, was written by Frédéric Chopin in 1842. [1] This composition is one of Chopin's most admired compositions and has long been a favorite of the romantic piano repertoire. Pianist Arthur Rubinstein once called it "the composition which is the closest to my heart." [2] The piece requires exceptional piano skills and great virtuosity to be interpreted at a high degree of proficiency. It is also very physically demanding, and according to his student Adolphe Gutmann, Chopin played it more gently than most performers. The polonaise was dedicated to Auguste Léo, a German banker and friend of Chopin. [3]

Origin of the Sobriquet 'Heroic'

George Sand, Chopin's longtime lover and companion, responded vigorously to the Revolutions of 1848 as did many intellectuals of the day. When the 1848 Revolution began in France, women had fewer rights than men and Sand believed these were necessary for progress. Around this time, Sand started her own newspaper which was published in a workers' co-operative. This allowed her to publish more political essays, expressing her strongly felt convictions. In one of these, for example, she wrote, "I cannot believe in any republic that starts a revolution by killing its own proletariat."

On hearing Chopin's Polonaise, Sand was left with a deep symbolic impression which she communicated to Chopin in their private correspondence. In one of their letters, she wrote passionately, "L'inspiration! La force! La vigueur! Il est indéniable qu'un tel esprit doit être présent dans la Révolution française. Désormais cette polonaise devrait être un symbole, un symbole héroïque!" ("The inspiration! The force! The vigour! There is no doubt that such a spirit must be present in the French Revolution. From now on this polonaise should be a symbol, a heroic symbol"). In spite of Chopin's reluctance to bestow descriptive names on his music, music scholars and concert pianists have nevertheless associated the grand architecture of the music with this sobriquet, "Heroic."

The polonaise features many difficult technical aspects, including:

The tempo of the piece is Alla polacca e maestoso ("like a polonaise and majestic"). The form may be viewed as intermediate between ternary (A-B-A) and rondo (A-B-A-C-A), since the first interlude is much shorter than the second (16 vs. 74 bars). The main theme is preceded by an introduction of about thirty seconds in length.

The piece features a grand introduction with fast ascending chromatic notes in both hands, setting the mood of the piece; also, it shows the heroic side of Chopin's art. The first theme is a dance-like theme in the tonic key of A♭ major. It is the familiar part of the piece and has the left hand moving in pounding octaves. The theme is repeated up an octave with short trills that fill some of the auditory gaps in the theme. The first interlude presents a series of chord progressions that lead into a recount of the traditional polonaise melody, with the polonaise rhythm employed in the left-hand accompaniment. The main theme then repeats once more.

The second, main interlude (or trio section) opens with six loud arpeggio chords before switching to a very soft bass ostinato of descending octaves first in the key of E major and then in E♭ major (written as D♯ major). A march-like melody follows the descending octaves and this occurs twice, and then a long lyrical interlude firstly with harmonic chord progressions and frequent modulations. This ends in a descending passage before the main theme is replayed. The theme is played louder and more dramatically and ends in a coda including material derived from the main theme. A typical performance of the polonaise lasts seven minutes. [1]

The piece is written in a 3
4 time marking but includes many implicit deviations from it. 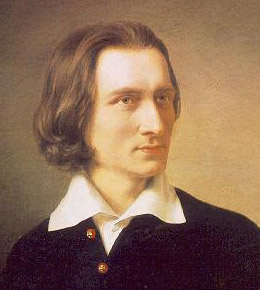 Funérailles is the 7th and one of the most famous pieces in Harmonies poétiques et religieuses, a collection of piano pieces by Franz Liszt. It was an elegy written in October 1849 in response to the crushing of the Hungarian Revolution of 1848 by the Habsburgs.

The Ballade No. 3 in A♭ major, Op. 47 is a ballade for solo piano by Frédéric Chopin, completed in 1841. A typical performance lasts seven to eight minutes.

Étude Op. 10, No. 5 in G♭ major is a study for solo piano composed by Frédéric Chopin in 1830. It was first published in 1833 in France, Germany, and England as the fifth piece of his Études Op. 10. This work is characterized by the rapid triplet figuration played by the right hand exclusively on black keys, except for one note, a F natural in measure 66. This melodic figuration is accompanied by the left hand in staccato chords and octaves.

Étude Op. 10, No. 1 in C major, known as the Waterfall étude, is a study for solo piano composed by Frédéric Chopin in 1829. It was first published in 1833 in France, Germany, and England as the first piece of his Études Op. 10. This study in reach and arpeggios focuses on stretching the fingers of the right hand. The American music critic James Huneker (1857–1921) compared the "hypnotic charm" that these "dizzy acclivities and descents exercise for eye as well as ear" to the frightening staircases in Giovanni Battista Piranesi's prints of the Carceri d'invenzione. Virtuoso pianist Vladimir Horowitz, who refused to perform this étude in public, said, "For me, the most difficult one of all is the C Major, the first one, Op. 10, No. 1."

The Polonaise in F-sharp minor, Op. 44, is a piece for solo piano written by Frédéric Chopin in 1841. It is often referred to as the "tragic" polonaise, due to its dark nature. The polonaise is dedicated to Princess Ludmilla de Beauveau, a prominent member of the Polish émigré community in Paris.

Piano Sonata No. 2, Op. 36, is a piano sonata in B-flat minor composed by Sergei Rachmaninoff in 1913. Rachmaninoff revised it in 1931, with the note, "The new version, revised and reduced by author."

The Piano Concerto No. 3 in E-flat major, Op. 29 by Camille Saint-Saëns, was composed in 1869. The concerto is written in 3 movements. When the concerto was first performed by Saint-Saëns himself at the Leipzig Gewandhaus in 1869 it was not well received, possibly because of its harmonic experimentation. It is not as often performed as his famous second concerto or the fourth or fifth concertos, but it is still an important addition to the piano concerto repertoire. It was dedicated to Élie-Miriam Delaborde, a pianist who is believed to have been the natural son of Charles-Valentin Alkan.