Polonia Piła is a motorcycle speedway club in the Polish town of Piła.

A club is an association of two or more people united by a common interest or goal. A service club, for example, exists for voluntary or charitable activities. There are clubs devoted to hobbies and sports, social activities clubs, political and religious clubs, and so forth. 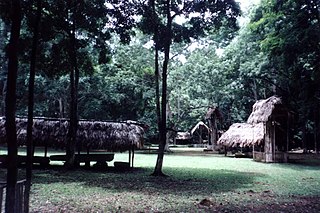 Dos Pilas is a Pre-Columbian site of the Maya civilization located in what is now the department of Petén, Guatemala. It dates to the Late Classic Period, being founded by an offshoot of the dynasty of the great city of Tikal in AD 629 in order to control trade routes in the Petexbatún region, particularly the Pasión River. In AD 648 Dos Pilas broke away from Tikal and became a vassal state of Calakmul, although the first two kings of Dos Pilas continued to use the same emblem glyph that Tikal did. It was a predator state from the beginning, conquering Itzan, Arroyo de Piedra and Tamarindito. Dos Pilas and a nearby city, Aguateca, eventually became the twin capitals of a single ruling dynasty. The kingdom as a whole has been named as the Petexbatun Kingdom, after Lake Petexbatún, a body of water draining into the Pasión River.

The pilum was a javelin commonly used by the Roman army in ancient times. It was generally about 2 metres long overall, consisting of an iron shank about 7 millimetres (0.28 in) in diameter and 60 centimetres (24 in) long with a pyramidal head. The shank was joined to the wooden shaft by either a socket or a flat tang.

Piła Voivodeship was a voivodeship in Poland from 1975 to 1998. It was superseded by the Greater Poland Voivodeship. The Voivodeship's capital city was Piła.

Piła is a town in northwestern Poland situated in the Greater Poland Voivodeship, previously capital of Piła Voivodeship (1975–1998). It had 73,791 inhabitants as of 2017 making it the fourth-largest city in the voivodeship after Poznań, Kalisz and Konin and is the largest city in the northern part of Greater Poland. It is the capital of Piła County. The town is located on the Gwda river and is famous for its green areas, parks and dense forests nearby. It is an important road and railway hub, located at the intersection of two main lines - Poznań - Szczecin and Bydgoszcz - Krzyż Wielkopolski.

The Polish Women's Volleyball League, known for sponsorship reasons as Orlen Liga is the highest level of women volleyball games played in Poland.

Pilskie Towarzystwo Piłki Siatkowej Piła or simply PTPS Piła, is a Polish women's volleyball club based in Piła and playing in the Orlen Liga. 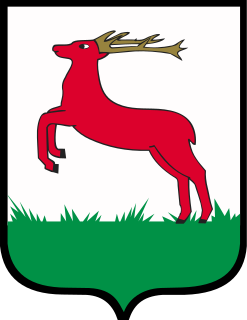 The coat of arms of the Polish city of Piła features a red deer on a green field, leaping to the dexter. It was first featured on a seal of the city council created probably in 1571. Initially the deer was leaping towards the sinister side of the shield; this was changed in the 17th century. During the Partitions of Poland the local German authorities sometimes also used a modification of the coat of arms featuring a crowned deer.

Victoria, officially the Municipality of Victoria,, is a 4th class municipality in the province of Laguna, Philippines. According to the 2015 census, it has a population of 39,321 people.

Pila, officially the Municipality of Pila,, is a 3rd class municipality in the province of Laguna, Philippines. According to the 2015 census, it has a population of 50,289 people.

Pila may refer to:

Piła County is a unit of territorial administration and local government (powiat) in Greater Poland Voivodeship, west-central Poland. It came into being on January 1, 1999, as a result of the Polish local government reforms passed in 1998. Its administrative seat and largest town is Piła, which lies 85 kilometres (53 mi) north of the regional capital Poznań. The county contains four other towns: Wyrzysk, 36 km (22 mi) east of Piła, Ujście, 10 km (6 mi) south of Piła, Łobżenica, 37 km (23 mi) east of Piła, and Wysoka, 25 km (16 mi) east of Piła.

Pila Partido is a partido of Buenos Aires Province in Argentina.

Arroyo de Piedra is a pre-Columbian Maya archaeological site in Guatemala located approximately 2-3 km east/northeast of Dos Pilas and 3 km west of Tamarindito. The site dates to the middle half of the Classic period. While initially a center of some regional importance, with the rise of Dos Pilas, Arroyo de Piedra was subsumed as a secondary center within the Petexbatun region.

Pila is a genus of large freshwater snails with an operculum, African and Asian apple snails, aquatic gastropod mollusks in the family Ampullariidae, the apple snails.

Pila is a village and municipality in Karlovy Vary District in the Karlovy Vary Region of the Czech Republic. The municipality covers an area of 7.1 square kilometres (2.7 sq mi) and as of 2006 it had a population of 461.

Every railway line in Poland has its own number, with the lowest numbers attached to the most important and most strategic routes.

Jonathan Solomon Pila FRS is an Australian mathematician at the University of Oxford.

Lady of Itzan was a queen of Dos Pilas.