Poonch or Punch is a district in Jammu and Kashmir, India. With headquarters the town of Poonch, it is bounded by the Line of Control (boundary between Indian and Pakistan administered Kashmir) on three sides (north, west and south). The 1947-48 war between India and Pakistan divided the earlier district into two parts. One went to Pakistan and the other became part of the then Indian state of Jammu and Kashmir.

The District headquarters is in the Poonch city. Rahul Yadav is the current District Commissioner. Presently District Poonch in Jammu and Kashmir is divided into six tehsils:

Each tehsil has its Tehsildar, who is the administrative head. The district is further divided into eleven. blocks: Poonch, Mandi, Loran Sathra Mendhar, Mankote Balakote, Surankote and Buffliaz. [2] The administrative head of each block is the Block Development Officer (BDO). Each block consists of a number of panchayats. Recently added One Sub Division(Surnkote), other is Mendhar. Poonch district has a total of 179 villages including Seri Khawaja.

In 2006 the Ministry of Panchayati Raj named Poonch one of the country's 250 most backward districts (out of a total of 640). [3] It is one of the three districts in Jammu and Kashmir currently receiving funds from the Backward Regions Grant Fund Programme (BRGF). [3]

Poonch district, India: mother-tongue of population, according to the 2011 Census. [6]

Resident ethnicities include Gujjars, Bakerwals, Jatts , Paharis, Punjabis, Kashmiris and Rajputs. Gujjars mostly reside on the slopes of mountains. The inhabitants typically cultivate small plots of land, and own some cattle. Gujjars and Bakerwals (nomadic tribes) speak Gojri, apart from Kashmiris the rest of the population speak Pahari-Pothwari (Poonchi) and only a minuscule population may be speaking Dogri. [8] [9]

With the recent developments between India and Pakistan, the divided people are again coming into contact with each other. The opening of the Poonch-Rawalakot bus is an important step in this direction.

There is a small airstrip located which is mainly used by the Indian Army.

There is no railway connectivity to Poonch yet.

Poonch district is connected to the summer capital Jammu by an all-weather road. It also has road connectivity with Srinagar through the pictureresque Mughal Road. A bus across the LOC, the Poonch-Rawalakot bus has helped to re-establish ties across the border.

Azad Jammu and Kashmir, abbreviated as AJK and colloquially referred to as simply Azad Kashmir, is a region administered by Pakistan as a nominally self-governing entity and constitutes the western portion of the larger Kashmir region, which has been the subject of a dispute between India and Pakistan since 1947. The territory shares a border to the north with Gilgit-Baltistan, together with which it is referred to by the United Nations and other international organizations as "Pakistani-administered Kashmir". Azad Kashmir also shares borders with the Pakistani provinces of Punjab and Khyber Pakhtunkhwa to the south and west, respectively. On its eastern side, Azad Jammu and Kashmir is separated from the Indian union territory of Jammu and Kashmir by the Line of Control (LoC), which serves as the de facto border between the Indian- and Pakistani-controlled parts of Kashmir. The administrative territory of Azad Jammu and Kashmir covers a total area of 13,297 km2 (5,134 sq mi) and has a total population of 4,045,366 as per the 2017 national census.

The Indo-Aryan language spoken on the Pothohar Plateau in the far north of Pakistani Punjab, as well as in most of Pakistan's Azad Kashmir and in western areas of India's Jammu and Kashmir, is known by a variety of names, the most common of which are Pahari and Pothwari. 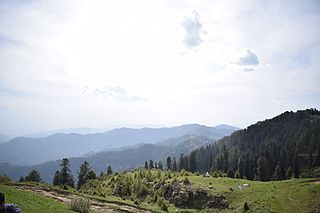 The Bakarwal are a mostly- Muslim nomadic tribe based in the Pir Panjal and Himalayan mountains of South Asia. They are traditionally, and still mainly, goatherds and shepherds. They reside in the entire Kashmir region between India and Pakistan, and in the Nuristan province of Afghanistan. 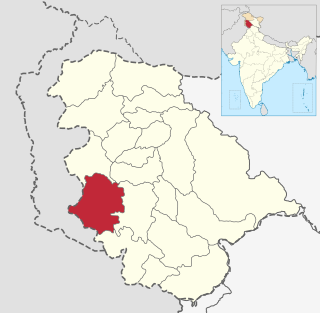 Kathua district is one of 20 administrative districts that comprise the Indian union territory of Jammu and Kashmir. It is surrounded by Jammu to the northwest, the Doda and Udhampur districts to the north, the state of Himachal Pradesh to the east, Punjab to the south, and Pakistan's working boundary to the west. Its terrain is diverse, consisting of rich agricultural areas along the Punjab/Kashmir border, plains sweeping eastward to the foothills of the Himalaya, and the mountainous Pahari region in the east. 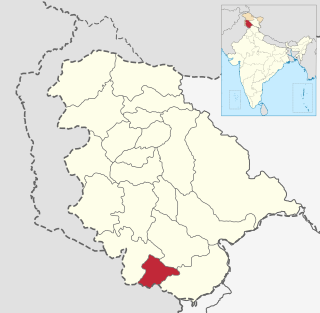 Samba District is a district in the Indian Union territory of Jammu and Kashmir formed in 2006. Before its formation, this area was part of Jammu district and Kathua district.

The Haveli Tehsil is a tehsil of the Poonch district in the Indian union territory of Jammu and Kashmir. It is headquartered at the Poonch Town.

Surankote is a tehsil and a municipal committee in the Poonch district of the Indian union territory of Jammu and Kashmir. It occupies the Surankote valley, located between the Pir Panjal and ranges within the Himalayas. It receives snowfall in winters.It is famous for the existence of lakes on the Pirpanjal range which are not still connected with the outside world. Although some people visit these lakes by foot for recreation and refreshment.

Dhargaloon, also spelled as Dargaloon or Dhargalon, is a village, located in Mendhar Tehsil of Poonch district in Indian administered state of Jammu and Kashmir. Its district headquarters are located in Poonch and administrative units in "Mendhar". This village comes under the "Balakote" block which is its local administrative unit. The village is located close the border with Pakistan and is largely influenced by the border forces. Residents of Dhargaloon staged a protest in May 2017 because of water and power shortages.

Bhata Dhurian is a village in Poonch district, Jammu and Kashmir, India.

The Pahari people or Pahari-speaking people form a heterogeneous group consisting of a number of castes, religions and ethnicities of the western parts of the Kashmir region split between India and Pakistan.They mainly speak Pahari–Pothwari Language which falls under Lahnda group of north-western Indo-Aryan languages.