Popalzai or Popalzay (Pashto : پوپلزی‎), also known as Popal, are Durrani (formerly called Abdali or Bor Tareen) Pashtuns of Afghanistan and Pakistan. The origin of the Abdali forefathers of Sadozai tribe is probably the Hephthalites. [1] [2] The forefathers of Ahmad Shāh Durrānī the founder of the Durrani Empire were from Sadozai tribe. According to Mohan Lal, the Zirak line begins with Sulaiman Zirak Khan. Zirak was father of Popalzai, Barakzai, and Alakozai. [3] Small number of Popalzais and Sadozais are also living in Pakistan, particularly in the cities of Quetta, Bannu, Dera Ismail Khan, Sudhanoti District, Poonch, Peshawar, Multan.

The Popalzai form a part of the Zirak confederation of Pashtun tribes. [6] 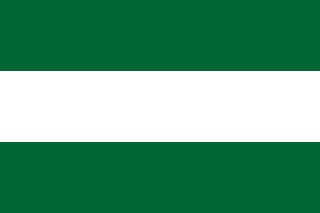 The Durrani Empire, also called the Sadozai Kingdom and the Afghan Empire, was an Afghan empire founded and built by Ahmad Shah Abdali in parts of Central Asia, Middle East and South Asia. At its maximum extent, the empire ruled over the modern-day countries of Afghanistan and Pakistan, as well as parts of northeastern and southeastern Iran, eastern Turkmenistan, and northwestern India. 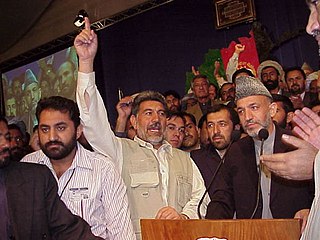 Hamid Karzai is an Afghan politician who was the president of Afghanistan from 22 December 2001 to 29 September 2014. He is also the leader of the Popalzai Durrani tribe of Kandahar.

Wazirzada are descendants of the Grand Wazirs of the Sadduzai Dynasty in Afghanistan. Wazirzadas are Sadozai Durranis; also a sub tribe of Popalzais and therefore belong to the Abdali or Durrani group of Pashtun tribes.

The Achakzai is a Pashtun tribe that resides on both sides of the Durand Line, centered on Killa Abdullah District in Pakistan with some clans as far away as Afghanistan's Kandahar Province.

Abdul Ahad Karzai was an Afghan politician, who served as the Deputy Speaker of the National Assembly of Afghanistan under King Zahir Shah in the 1960s. He was the son of Khair Mohammad Khan and brother of Habibullah and Azizullah Karzai. His sons are the former Afghan President Hamid Karzai and his brothers Ahmed Wali, Mahmud and Qayum. He is also the uncle of Hekmat Karzai. 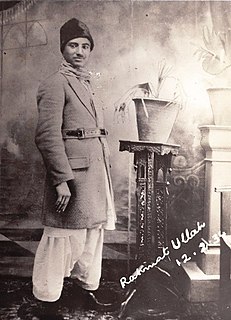 Malik Saddu Khan or Sado Khan was a Pashtun figure, and the ancestor of the Sadduzai or Sadozai clan of the Abdali Pashtun tribe, to which belongs Ahmad Shah Abdali and some known families of Multan. He succeeded his father as chief of the Habibzai section of the tribe, but due to his "bravery and ability" he was selected by the Abdalis, then living between Kandahar and Herat, to be their overall leader in 1598.