Pope Adeodatus I (570 – 8 November 618), also called Deodatus I or Deusdedit, was the bishop of Rome from 19 October 615 to his death. He was the first priest to be elected pope since John II in 533. The first use of lead seals or bullae on papal documents is attributed to him. His feast day is 8 November.

Adeodatus was born in Rome, the son of a subdeacon named Stephen. He served as a priest for 40 years before his election and was the first priest to be elected pope since John II in 533. [1]

Almost nothing is known about Adeodatus I's pontificate. [1] It represents the second wave of opposition to Gregory the Great's papal reforms, the first being the pontificate of Sabinian. He reversed the practice of his predecessor, Boniface IV, of filling the papal administrative ranks with monks by recalling the clergy to such positions and by ordaining some 14 priests, the first ordinations in Rome since Gregory's pontificate. [2] [1] According to tradition, Adeodatus was the first pope to use lead seals (bullae) on papal documents, which in time came to be called "papal bulls". [3] One bulla dating from his reign is still preserved, the obverse of which represents the Good Shepherd in the midst of His sheep, with the letters Alpha and Omega underneath, while the reverse bears the inscription: Deusdedit Papæ. [4]

In August 618, an earthquake struck Rome, followed by an outbreak of scabies. Adeodatus died 8 November 618, and was eventually succeeded by Boniface V. [1] His feast day is 8 November. [4] He is also a saint in the Orthodox Church as one of the pre-Schism "Orthodox Popes of Rome". [5]

Pope Gregory III was the bishop of Rome from 11 February 731 to his death. His pontificate, like that of his predecessor, was disturbed by Byzantine iconoclasm and the advance of the Lombards, in which he invoked the intervention of Charles Martel, although ultimately in vain. He was the last pope to seek the consent of the Byzantine exarch of Ravenna for his election, and the last non-European Pope until Pope Francis was elected on March 13, 2013.

Sylvester I was the bishop of Rome from 31 January 314 until his death. He filled the see of Rome at an important era in the history of the Western Church, yet very little is known of him. The accounts of his pontificate preserved in the seventh- or eighth-century Liber Pontificalis contain little more than a record of the gifts said to have been conferred on the church by Constantine I, although it does say that he was the son of a Roman named Rufinus. His feast is celebrated as Saint Sylvester's Day in Western Christianity on 31 December, while Eastern Christianity commemorates it on 2 January. 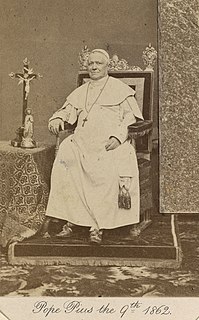 Pius IX was head of the Catholic Church from 1846 to 1878, the longest papal reign. After starting as a liberal he reversed positions and strongly condemned liberalism. He was notable for convoking the Vatican Council in 1868 and for permanently losing papal control of the Papal States in 1870 to the Kingdom of Italy. He refused to leave Vatican City, declaring himself a "prisoner of the Vatican". His diplomacy mixes many failures with some successes such as Austria-Hungary, Portugal, Spain, Canada, Tuscany, Ecuador, Venezuela, Honduras, El Salvador, and Haiti.

Deusdedit or Deodatus is the name of several ecclesiastical figures of the Middle Ages:

The history of the Catholic Church is integral to the history of Christianity as a whole. It is also, according to church historian, Mark A. Noll, the "world's oldest continuously functioning international institution." This article covers a period of just under two thousand years