Anterus was the son of Romulus, born in Petilia Policastro, [2] Calabria. He is thought to have been of Greek origin, [8] and his name may indicate that he was a freed slave. [9] He succeeded Pope Pontian, who had been deported from Rome to Sardinia, along with the antipope Hippolytus. He created one bishop, for the city of Fondi. [8]

Some scholars believe Anterus was martyred, [8] [10] because he ordered greater strictness in searching into the acts of the martyrs, exactly collected by the notaries appointed by Pope Clement I. [8] [11] Other scholars doubt this and believe it is more likely that he died in undramatic circumstances during the persecutions of Emperor Maximinus the Thracian. [9]

He was buried in the papal crypt of the Catacomb of Callixtus, on the Appian Way [8] in Rome. The site of his sepulchre was discovered by Giovanni Battista de Rossi in 1854, with some broken remnants of the Greek epitaph engraved on the narrow oblong slab that closed his tomb; [11] only the Greek term for bishop was legible. [10] His ashes had been removed to the Church of Saint Sylvester in the Campus Martius [8] and were discovered on 17 November 1595, when Pope Clement VIII rebuilt that church. [8]

Pope Anterus is remembered in the Catholic Church on 3 January [12] and in the Russian Orthodox Church on 18 August. [6] 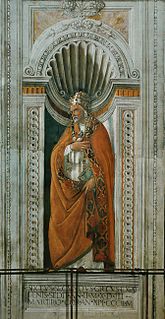 Pope Sixtus III was the bishop of Rome from 31 July 432 to his death on 18 August 440. His ascension to the papacy is associated with a period of increased construction in the city of Rome. His feast day is celebrated by Catholics on 28 March.

Equal-to-the-apostles is a special title given to some saints in Eastern Orthodoxy and in Byzantine Catholicism. The title is bestowed as a recognition of these saints' outstanding service in the spreading and assertion of Christianity, comparable to that of the original apostles.