Pope Felix IV (died 22 September 530) was the bishop of Rome from 12 July 526 to his death. He was the chosen candidate of Ostrogoth King Theodoric the Great, who had imprisoned Felix's predecessor, John I.

Felix came from Samnium, the son of Castorius. He was elected after a gap of nearly two months after the death of John I, who had died in prison in Ravenna, having completed a diplomatic mission to Constantinople on behalf of the Ostrogoth King Theodoric the Great. The papal electors acceded to the king's demands and chose Felix as pope. Felix's favor in the eyes of the king allowed him to press for greater benefits for the Church. [1] However, Theodoric died later that year, allowing Felix to pursue his own policies in peace. [2]

Felix built the Santi Cosma e Damiano in the Imperial forums on land donated by Queen Amalasuntha, [1] and consecrated no fewer than thirty-nine bishops, during his short pontificate of four years. [3] During Felix's pontificate, an imperial edict was passed granting that cases against clergy should be dealt with by the pope or a designated ecclesiastical court. Violation of this ruling would result in a fine, which proceeds were designated for the poor. Felix also defined church teaching on grace and free will in response to a request of Faustus of Riez, in Gaul, on opposing Semi-Pelagianism. As such, Felix approved the teachings of the Council of Orange in 529, which also explained Original sin. [4]

Felix attempted to designate his own successor: Pope Boniface II. The reaction of the Senate was to forbid the discussion of a pope's successor during his lifetime or to accept such a nomination. The majority of the clergy reacted to Felix's activity by nominating Dioscorus as Pope. Only a minority supported Boniface. His feast day is celebrated on 30 January. [1]

Pope Boniface II was the first Germanic bishop of Rome. He ruled the Holy See from 22 September 530 until his death. He was born an Ostrogoth.

Pope Victor II, born Gebhard of Dollnstein-Hirschberg, was the head of the Catholic Church and ruler of the Papal States from 13 April 1055 until his death in 1057. Victor II was one of a series of German-born popes who led Gregorian Reform.

Pope Damasus II was the head of the Catholic Church and ruler of the Papal States from 17 July 1048 to his death on 9 August that same year. He was the second of the German pontiffs nominated by Emperor Henry III. A native of Bavaria, he was the third German to become pope and had one of the shortest papal reigns.

Dioscorus was a deacon of the Alexandrian and the Roman church from 506. In a disputed election following the death of Pope Felix IV, the majority of electors picked him to be pope, in spite of Pope Felix's wishes that Boniface II should succeed him. However, Dioscorus died less than a month after the election, allowing Boniface to be consecrated pope and Dioscorus to be branded an antipope. 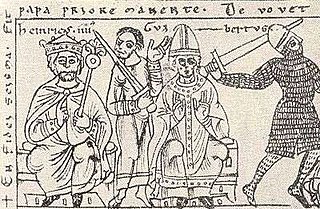 Sylvester IV, born Maginulf, was a claimant to the Papacy from 1105 to 1111. Today he is regarded as an antipope.

The history of the papacy, the office held by the pope as head of the Catholic Church, according to Catholic doctrine, spans from the time of Peter to the present day. However the first bishop of Rome to be contemporaneously referred to as Pope is Damasus I (366–84). Moreover, many of the bishops of Rome in the first three centuries of the Christian era are obscure figures. Most of Peter's successors in the first three centuries following his life suffered martyrdom along with members of their flock in periods of persecution, and do not seem to have recognized any supreme hierarchy to be passed on within the church.