His mother was certainly Marozia, the most powerful woman in Rome. Yet the paternity of John XI became a matter of dispute. According to Liutprand of Cremona (Antapodosis, ii. c. 48) and the "Liber Pontificalis," his father was Pope Sergius III (904–911), ("Johannes, natione Romanus ex patre Sergio papa," "Liber Pont." ed. Duchesne, II, 243). Ferdinand Gregorovius, [2] Ernst Dümmler, Thomas Greenwood (Cathedra Petri: A Political History of the great Latin Patriarchate), Philip Schaff, and Rudolf Baxmann [3] agree with Liutprand that Pope Sergius III fathered Pope John XI. [4] If that is true, John XI would be the only known illegitimate son of a Pope to have become Pope himself. (Silverius was the legitimate son of Pope Hormisdas).

On the other hand, Horace Kinder Mann states: "Sergius at once declared the ordinations conferred by Formosus null; but that he put his two predecessors to death, and by illicit relations with Marozia had a son, who was afterwards John XI, must be regarded as highly doubtful. These assertions are only made by bitter or ill-informed adversaries, and are inconsistent with what is said of him by respectable contemporaries [such as Flodoard]." [5] Reginald L. Poole, [6] Peter Llewelyn (Rome in the Dark Ages), Karl Josef von Hefele, August Friedrich Gfrörer, [7] Ludovico Antonio Muratori, and Francis Patrick Kenrick [8] also maintain that Pope John XI was sired by Alberic I of Spoleto, Count of Tusculum.

His mother Marozia was the de facto Roman ruler at the time, resulting in his appointment to the Papacy. Marozia was thus allegedly able to exert complete control over the Pope.

At the overthrow of Marozia around 932, John XI reportedly became subject to the control of Alberic II, his younger half brother. The only control left to the Pope was the exercise of his purely spiritual duties. All other jurisdiction was exercised through Alberic II. This was not only the case in secular, but also in ecclesiastical affairs. [9]

It was at the insistence of Alberic II that the pallium was given to Theophylactus, Patriarch of Constantinople (935), and also to Artold, Archbishop of Reims (933). It was John XI who sat in the Chair of Peter during what some traditional Catholic sources consider its deepest humiliation, but it was also he who granted many privileges to the Congregation of Cluny, which was later on a powerful agent of Church reform. [9] 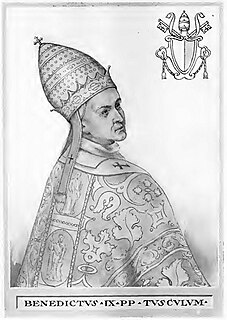 Pope Benedict IX, born Theophylactus of Tusculum in Rome, was pope on three occasions between October 1032 and July 1048. Aged approximately 20 at his first election, he is one of the youngest popes in history. He is the only man to have been pope on more than one occasion and the only man ever to have sold the papacy. 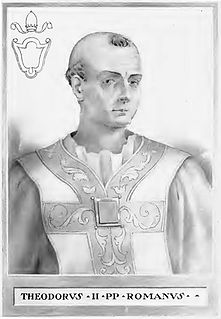 Pope Leo IV was pope from 10 April 847 to his death in 855. He is remembered for repairing Roman churches that had been damaged during Arab raids on Rome, and for building the Leonine Wall around Vatican Hill. Pope Leo organized a league of Italian cities who fought and won the sea Battle of Ostia against the Saracens.

Pope John XII was head of the Catholic Church from 16 December 955 to his death in 964. He was related to the Counts of Tusculum and a member of the powerful Roman family of Theophylact which had dominated papal politics for over half a century. His pontificate became infamous for the alleged depravity and worldliness with which he conducted his office. 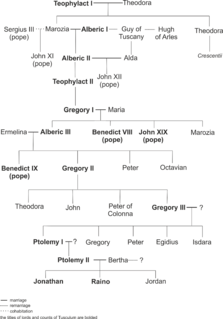