Pius VIII's pontificate was the shortest of the 19th century, and is likely the least remembered. His brief papacy witnessed the Catholic Emancipation in Great Britain in 1829, which he welcomed, and the July Revolution in France in 1830, which he reluctantly accepted. Pius VIII is often remembered for his writings on marriages between Catholics and Protestants in the 1830 encyclical Litteris altero abhinc, in which he declared that a marriage could only be properly blessed if proper provisions had been made to ensure the bringing up of children in the Catholic faith. His death less than two years after his election to the papacy has led to speculation of a possible murder.

Francesco Saverio Castiglioni was born in Cingoli, Marche, the third of eight children of Count Ottavio Castiglioni and his wife Sanzia Ghislieri. His baptismal name was recorded as Francesco Saverio Maria Felice. An ancestor of his was Pope Celestine IV. He studied at the Collegio Campana run by the Society of Jesus and, after that, at the University of Bologna where he earned a doctorate in canon law and in civil law in 1785. He was ordained to the priesthood in Rome on 17 December 1785. [1]

On 11 August 1800 Castiglioni was appointed Bishop of Montalto. He received episcopal consecration on 17 August in Rome at the Church of Santi Domenico e Sisto. Cardinal Giuseppe Doria Pamphili served as consecrator, assisted by Nicola Buschi and Camillo Campanelli. He refused to swear allegiance to Napoleon or to his client state, the Kingdom of Italy. On 29 July 1808 he was arrested and taken to Milan. Castiglioni was subsequently taken to Pavia, to Mantua, and then to Turin, where he arrived on 10 November 1813. On 18 November he was brought back to Milan. Finally, after Napoleon fell, Castiglioni returned to his diocese on 16 June 1814. [1] He was praised by Pope Pius VII who in 1816 elevated him to the cardinalate as the Cardinal-Priest of Santa Maria in Traspontina. He held various high offices thereafter, including that of Apostolic Penitentiary. He soon became a Cardinal-Bishop of the suburbicarian see of Frascati.

Castiglioni was considered a front-runner in the conclave of 1823. He was known to be close to Pius VII, who often referred to Castiglioni as "Pius VIII." [2] However, he failed to gain the necessary votes, in part due to controversy surrounding an alliance between him and another favorite, Secretary of State Ercole Consalvi. Annibale Cardinal della Genga was elected instead, and he took the name of Pope Leo XII.

After the death of Pope Leo XII in 1829, Castiglioni was again considered to be a major candidate, though was questioned due to his frail health. Despite these concerns, he was elected as pope in the papal conclave of 1829. Given that Pope Pius VII had referred to him as Pius VIII, it seemed only suitable that it was the pontifical name that he chose. He was crowned on 5 April 1829 by Cardinal Giuseppe Albani. [1]

As Pope Pius VIII, he initiated some reforms in the Papal States. On 24 May 1829 he issued an encyclical, Traditi humilitati . Regarding religious pluralism, he condemned the "foul contrivance of the sophists of this age" that would place Catholicism on par with any other religion. Regarding Bible translations, he wrote in that encyclical:

We must also be wary of those who publish the Bible with new interpretations contrary to the Church's laws. They skillfully distort the meaning by their own interpretation. They print the Bibles in the vernacular and, absorbing an incredible expense, offer them free even to the uneducated. Furthermore, the Bibles are rarely without perverse little inserts to ensure that the reader imbibes their lethal poison instead of the saving water of salvation. [3]

On 25 March 1830, in the brief Litteris altero, he condemned the masonic secret societies and modernist biblical translations. Pius VIII accepted the situation on mixed marriages between Protestants and Catholics in Germany, but he opposed changes in Ireland and Poland, which were still strongly Catholic. In Litteris altero abhinc, he declared that a mixed marriage could only be blessed by a priest if proper promises had been made to educate the children of the marriage as Catholics. [4]

His brief pontificate saw the Catholic Emancipation in the United Kingdom and the July Revolution in France, which occurred in 1829 and 1830, respectively. Pius VIII recognised Louis Philippe I (1830–48) as French king and allowed him to use the French king's customary title "Roi Très Chretien," which means "His Most Christian Majesty." [5]

He canonized no saints during his brief pontificate but he beatified two individuals. On 23 December 1829 he beatified Benincasa da Montepulciano, and on 4 March 1830 he beatified Chiara Gambacorti. In 1830 Pius VIII proclaimed Saint Bernard of Clairvaux a Doctor of the Church.

Of remarkable importance to the future is a letter of his to a French bishop, in which he allowed the taking of moderate interest (under the principle of foregoing a profit by investing the lent capital; see Vix pervenit for the discussion of the topic).

Being, at that time, head of the Roman State, he remained popular for decades for removing the so-called cancelletti (grids) from the taverns, which Leo XII had ordered to be put there to hinder the consumption of wine unless accompanied by a meal. A poem was written about him that ran thus: "Allor che il sommo Pio / comparve innanzi a Dio / gli domandò: Che hai fatto? / Rispose: Nient'ho fatto. / Corresser gli angeletti: / Levò i cancelletti." (Which is approximately in English: At the time when the highest Pius / approached God in the highest / He asked him: What have you got done? / He answered: "There's nothing I've got done." / But the angels present knew better: / "He cancelled the cancelletter".) [7]

Pius VIII was in very poor health during most of his papacy. He became very ill in early November 1830, developing fistulas on his neck and knee while his entire body became covered with pustules, which the doctors were able to manage by 15 November. Pius VIII became seriously ill on 23 November and had difficulties in breathing for the following three nights until being given the Viaticum on 28 November and the Extreme Unction later that day. [5] [8] He died on 30 November 1830 at the age of 69 in the Quirinal Palace in Rome.

Certain theories have emerged suggesting that Pius VIII was poisoned, but no proof has been found to verify this claim. [5] Cardinal Camillo di Pietro gave the funeral oration for the late pope, before the cardinals entered the conclave to choose a successor. Pius VIII was succeeded by Pope Gregory XVI.

The pope's episcopal lineage, or apostolic succession was: [9] 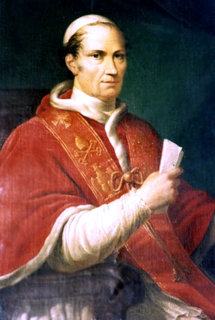 Pope Leo XII, born Annibale Francesco Clemente Melchiorre Girolamo Nicola della Genga, pronunciation (help·info) was head of the Catholic Church and ruler of the Papal States from 28 September 1823 to his death in 1829

Pope Leo XIII was head of the Catholic Church from 20 February 1878 to his death. He was the oldest pope, and had the third-longest confirmed pontificate, behind those of Pius IX and John Paul II. 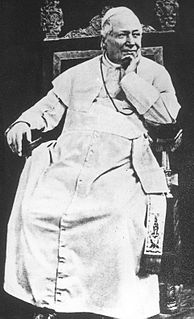 Pope Pius IX was head of the Catholic Church from 16 June 1846 to his death on 7 February 1878. He was the longest-reigning elected pope, serving for over 31 years. During his pontificate, Pius IX convened the First Vatican Council (1869–70), which decreed papal infallibility, but the council was cut short owing to the loss of the Papal States.

Pope Pius X was head of the Catholic Church from August 1903 to his death in 1914. Pius X is known for vigorously opposing modernist interpretations of Catholic doctrine, promoting liturgical reforms and orthodox theology. He directed the production of the 1917 Code of Canon Law, the first comprehensive and systemic work of its kind. 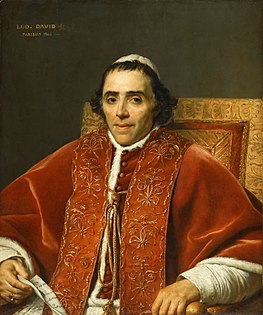 Pope Pius VII, born Barnaba Niccolò Maria Luigi Chiaramonti, was head of the Catholic Church and ruler of the Papal States from 14 March 1800 to his death in 1823. Chiaramonti was also a monk of the Order of Saint Benedict in addition to being a well-known theologian and bishop throughout his life.

Giuseppe Siri was an Italian Cardinal of the Catholic Church who served as Archbishop of Genoa from 1946 to 1987, and was elevated to the rank of cardinal in 1953 by Pope Pius XII. He was a close friend of Pope Pius XII, and a staunch defender of tradition. He was considered a likely candidate to succeed Pius XII, John XXIII, Paul VI, and John Paul I.

The papal conclave of 1823 was convoked following the death of Pope Pius VII on 20 August 1823. The conclave began on 2 September and ended 26 days later with the election of Cardinal Annibale Sermattei della Genga who became Pope Leo XII.

Traditi humilitati is a papal encyclical issued by Pope Pius VIII in 1829. It laid out the program for his pontificate. Although it does not explicitly mention Freemasonry, it has been cited by later Church documents on the subject because it condemned those "who think that the portal of eternal salvation opens for all from any religion". 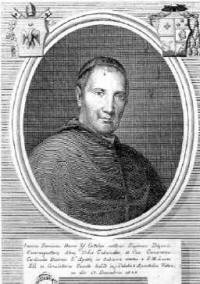 There are many papal pronouncements against Freemasonry; the most prominent include:

The papal conclave of 1655 was convened following the death of Pope Innocent X and ended with the election of Fabio Chigi as Alexander VII. The conclave quickly reached a deadlock, with Giulio Cesare Sacchetti receiving 33 votes throughout the conclave, but never securing enough for his own election. Chigi was eventually elected Pope when Cardinal Mazarin, the leader of the French government, consented to his election at the request of Sacchetti. 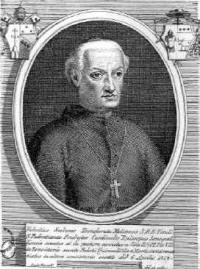 Fabrizio Sceberras Testaferrata was a native of Malta and a bishop and cardinal of the Catholic Church. He was Bishop of Senigallia from 1818 until his death in 1843.