Pope Urban I (175?-230) (Latin : Urbanus I) was the bishop of Rome from 222 to 23 May 230. [1] He was born in Rome and succeeded Callixtus I, who had been martyred. It was previously believed for centuries that Urban I was also martyred. However, recent historical discoveries now lead scholars to believe that he died of natural causes.[ citation needed ]

Much of Urban's life is shrouded in mystery, leading to many myths and misconceptions. Despite the lack of sources he is the first pope whose reign can be definitely dated. [2] Two prominent sources do exist for Urban's pontificate: Eusebius' history of the early Church and also an inscription in the Coemeterium Callisti which names the Pope. [1] Urban ascended to the papacy in 222, the year of Emperor Elagabalus' assassination, and served during the reign of Alexander Severus. It is believed that Urban's pontificate took place during a peaceful time for Christians in the Empire as Severus did not promote the persecution of Christianity. [1]

It is believed that the schismatic Hippolytus was still leading a rival Christian congregation in Rome, and that he published the Philosophumena , an attack on Urban's predecessor, Callixtus I. [3] Urban is said to have maintained the hostile policy of Callixtus when dealing with the schismatic party. [1]

Due to the relative freedoms the Christian community had during Severus' reign the Church in Rome grew, leading to the belief that Urban was a skilled converter. [3] A Papal decree concerning the donations of the faithful at Mass is attributed to Pope Urban:

The gifts of the faithful that are offered to the Lord can only be used for ecclesiastical purposes, for the common good of the Christian community, and for the poor; for they are the consecrated gifts of the faithful, the atonement offering of sinners, and the patrimony of the needy. [4]

It was believed that Urban was buried in the Coemetarium Praetextati where a tomb was inscribed with his name. However, when excavating the Catacomb of Callixtus Italian archaeologist Giovanni de Rossi uncovered the lid of a sarcophagus which suggested that Urban was in fact buried there. De Rossi also found a list of martyrs and confessors who were buried at St. Callistus', which contained Urban's name. De Rossi therefore concluded that the Urban buried in the Coemetarium Praetextati was another bishop and Pope Urban was located in Catacomb of St. Callistus. While many historians accept this opinion, doubt remains since Pope Sixtus III's list of saints buried in St. Callistus' Catacomb does not include Urban in the succession of popes but rather in a list of foreign bishops. Therefore, it is possible that Pope Urban is indeed buried in the Coemetarium Praetextati. [3] [5]

Urban is a saint of the Catholic Church and the Eastern Orthodox Church. His relic is located in Hungary in the Monok Roman Catholic Church. In 1773, Pope Clement XIV donated it to the Andrássy family.

As no contemporary accounts of Urban's pontificate exist there have been many legends and acts attributed to him which are fictitious or difficult to ascertain the factual nature of. The legendary Acts of St. Cecilia and the Liber Pontificalis both contain information on Urban, although their reliability is doubtful. Chaucer made him a character in the Second Nun's Tale of the Canterbury Tales.

A story that was once included in the Catholic Church's Breviary states that Urban had many converts among whom were Tiburtius and his brother Valerianus, husband of Cecilia. Tradition credits Urban with the miracle of toppling an idol through prayer. [6] This event is believed to have led to Urban being beaten and tortured before being sentenced to death by beheading.

A further belief, now known as an invention from the sixth century, was that Urban had ordered the making of silver liturgical vessels and the patens for twenty-five titular churches of his own time.

Urban is found in various pieces of artwork usually in one of two forms. Often he is found sitting wearing the papal tiara, papal robes and holding a sword pointed towards the ground. Otherwise Urban may be portrayed wearing papal garb and a bishop's mitre while holding a bible and a bunch of grapes. [7] [8] An image of Urban is on a 12th-century fresco at Chalivoy-Milon in the Berry Art Gallery. [9]

Other less common depictions of Pope Urban are:

Pope Callixtus III, born Alfonso de Borgia, was head of the Catholic Church and ruler of the Papal States from 8 April 1455 to his death. Borgia spent his early career as a professor of law at the University of Lleida; he later served as a diplomat for the kings of Aragon. He became a tutor for King Alfonso V's illegitimate son Ferdinand. After arranging a reconciliation between Alfonso and Pope Martin V, Borgia was made Bishop of Valencia. In 1444, Pope Eugene IV named him a cardinal, and Borgia became a member of the Roman Curia. During the siege of Belgrade (1456), Callixtus initiated the custom that bells be rung at midday to remind the faithful to pray for the crusaders. The tradition of the Angelus noon bell still exists in most Catholic Churches to this day. He was also responsible for the retrial of Joan of Arc that saw her vindicated. He appointed two nephews as cardinals, one of whom became Pope Alexander VI.

Pope Paschal I was the bishop of Rome and ruler of the Papal States from 25 January 817 to his death in 824. 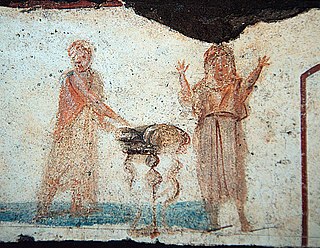 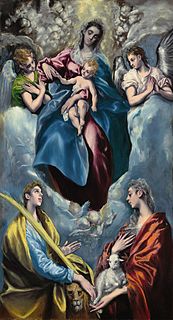 Martina of Rome was a Roman martyr under emperor Alexander Severus. A patron saint of Rome, she was martyred in 226, according to some authorities, more probably in 228, under the pontificate of Pope Urban I, according to others. Her feast day is January 30.