Porto Seguro (Portuguese pronunciation:  [ˈpoʁtu siˈɡuɾu] ) is a city located in the far south of Bahia, Brazil. The city has an estimated population of 145,431 (2015), covers 2,287 square kilometres (883 sq mi), and has a population density of 52.7 residents per square kilometer. The area that includes Porto Seguro and neighboring Santa Cruz Cabrália and Eunápolis holds a distinctive place in Brazilian history: in 1500 it was the first landing point of Portuguese navigators, principally Pedro Álvares Cabral. [2] The crime rate is considered high, as is the case in all Bahia State [3]

The climate in Porto Seguro is warm, oppressive, and partly cloudy. Over the course of the year, the temperature typically varies from 19ºC lows (67°F) to 29C highs (84°F) and is rarely below 18ºC (65°F) or above 31ºC (88°F). The temperature in Porto Seguro varies so little throughout the year that it is not entirely meaningful to discuss hot and cold seasons.

The city is now considered one of the most important destinations of Brazil, receiving tourists from Brazil, Argentina, Uruguay, and Chile. The city and surrounding area have some luxury hotels and hundreds of smaller hotels, as well as an airport well connected with the major Brazilian cities. Apart from tourism, other important activities are agriculture (especially cashew and coconut), reforestation with eucalyptus trees, cattle, and trade and services.

The city offers one of the most famous Carnival parties in Bahia. “Electric Trios” (trucks carrying sound systems and live bands), dancing “blocos” and “cordões” (street dancing groups) drag thousands of tourists along the "Passarela do Álcool" Passageway (the traditional local avenue) and to beach bars.

Historical Downtown Area The historical site in the Cidade Alta area is a National Heritage Monument put under government trust by federal decree since 1973. It was one of the first towns in Brazil and played an important role during the first years of European colonization. It includes three churches and around 40 buildings (among private residential houses and public institutions), restored by the state government for the 500th anniversary celebration of Brazilian discovery.

Monte Pascoal National Park Created in 1961 to preserve the place where Brazil was discovered by Portuguese warriors. It includes swamp areas, salt marshes, river marshes, and a coastline around the rocky, high, round hill, considered the first point of land to be seen by the Portuguese traveler Pedro Álvares Cabral’s crew. It extends over an area of 144.8 square kilometres (55.9 sq mi), including the Pataxó tribe’s indigenous protection land. Besides its historical importance, it also offers protection to one of the last stretches of Atlantic forest in the Northeastern area of Brazil. The area is aimed at preserving valuable woods such as Brazil wood, and still hosts many species of animals threatened by extinction, including the collared sloth and black bear.

Recife de Fora Sea Park It was the first city-owned park in Brazil. During low tide, visitors can view a wide range of coral reefs, fish, and many sea species.

Glória Hillock These are ruins of what many consider to be the São Francisco Church, where Ynaiá, an Indian woman who died for the love of a crewmember of Portuguese navigator Gonçalo Coelho's fleet, was buried. The São Francisco Church is said to be the first one built in Brazil in baroque style, probably in 1504, whose ruins date to 1730.

The Nossa Senhora da Penha Matrix Church Located on Pero de Campos Tourinho Square, in Cidade Alta, it was built at the end of the 18th century. It comprises a nave, a main chapel, a sacristy, and a bell tower.

Jaqueira Indigenous Protection Reservation A huge jackfruit tree trunk, tumbled down by nature itself, represents the return to one’s origins and acts as a historical and cultural reference to honor the ancestral fathers and mothers of Pataxó families who recently moved into this 8.27 square kilometres (3.19 sq mi) Indian protection area. Their huts, spread around original Atlantic Forest woods, retain the original formats, giving visitors the impression of being back 500 years in time to pre-Columbian Brazil.

The Discovery Outdoors Museum An outdoors, natural museum, whose “art galleries” are its beaches, valleys and natural trails and whose “collection” is a set of geographical formations and traditional villages, disposed as art works in permanent exhibition, engraved in ancient media, which are spread along the 130 square kilometres (50 sq mi) length of Bahia’s historical southern coastline.

Porto Seguro Airport was opened in 1982. Its passenger terminal was very simple and small; this building is now occupied by the Fire Department of the city. In 1997, the airport was reopened, having received a new passenger terminal, new aircraft parking lot, and extension of runway to operate large aircraft. In 2010 the airport had some major renovations preparing the city to host several of the International football teams who had a training camp in Porto Seguro for the World Cup 2014. 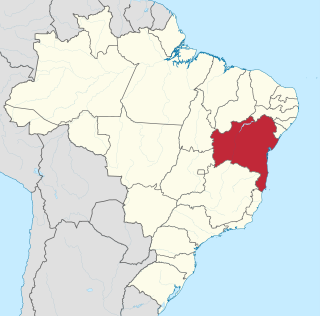 Bahia is one of the 26 states of Brazil and is located in the northeastern part of the country on the Atlantic coast. It is the 4th-largest Brazilian state by population and the 5th-largest by area. Bahia's capital is the city of Salvador, located on a spit of land separating the Bay of All Saints from the Atlantic. Once a monarchial stronghold dominated by agricultural, slaving, and ranching interests, Bahia is now a major manufacturing center whose last four elections have been dominated by the Workers' Party. 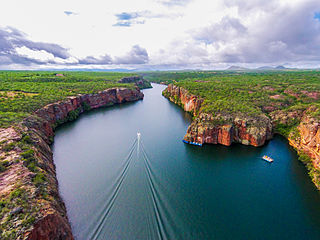 The São Francisco River or Rio São Francisco is a river in Brazil. With a length of 2,914 kilometres (1,811 mi), it is the longest river that runs entirely in Brazilian territory, and the fourth longest in South America and overall in Brazil. It used to be known as the Opara by the indigenous people before colonisation, and is today also known as Velho Chico.

Macapá is a city in Brazil, population 493,634. It is the capital of Amapá state in the country's North Region. It is located on the northern channel of the Amazon River near its mouth on the Atlantic Ocean. The city is on a small plateau on the Amazon in the southeast of the state of Amapá. The only access by road from outside the province is from French Guiana, although there are regular ferries to Belem, Brazil. Macapá is linked by road with some other cities in Amapá. The equator runs through the middle of the city, leading residents to refer to Macapá as "The capital of the middle of the world." It covers 6,407.12 square kilometres (2,473.80 sq mi) and is located northwest of the large inland island of Marajó and south of the border with French Guiana. The Bay of All Saints, also known as All Saints' Bay and Todos os Santos Bay, is the principal bay of the Brazilian state of Bahia, to which it gave its name. It sits on the eastern coast of Brazil, surrounding part of Bahia's capital Salvador and opening to the Atlantic Ocean. It covers 1,223 square kilometers (472 sq mi), making it the largest bay in Brazil. 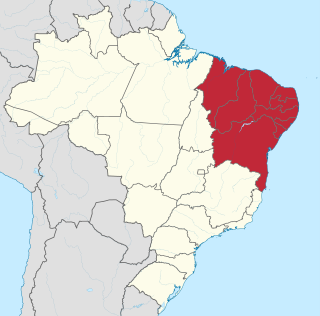 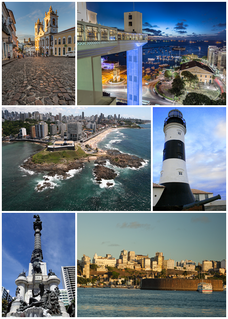 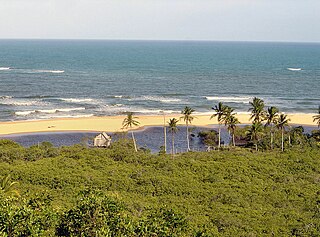 Trancoso is a district in the municipality of Porto Seguro in the state of Bahia, Brazil. Once a small fishing village, the town is now known for its beaches and has increased in popularity since gaining international attention around 2000 while retaining an eco-friendly appeal.

Pau Brasil National Park is a national park in the state of Bahia, Brazil. It preserves a remnant of the Atlantic Forest biome.

The Caraíva River is a river of Bahia state in eastern Brazil.

The De Contas River is a river of Bahia state in eastern Brazil. In Portuguese, it is sometimes erroneously called "Rio das Contas". It is the main river of the hydrographic basin named after him. 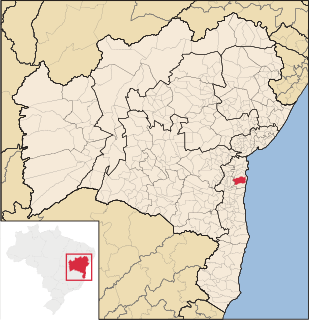 Camamu is a municipality in the state of Bahia, Brazil. Politically, it is in the Valença subregion of the Sul Baiano region. It is located on the southern coast of Bahia state, the Costa do Dendê, along the BA-001 highway. The municipality covers an area of 885.20 km², and, as of the 2010 census, it had 31,055 inhabitants 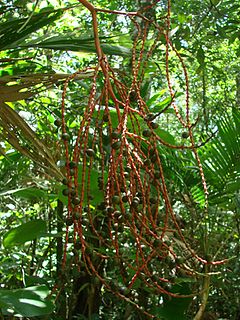 The IBGE Ecological Reserve (Portuguese: Reserva Ecológica do IBGE, also known as the Reserva Ecológica do Roncador , is a protected area near Brasília, the capital of Brazil. It has a diverse ecology including various rare or endangered species, and is an important center for research into the ecology of the poorly protected Cerrado environment. Numerous scientific papers have referred to research conducted in the reserve. 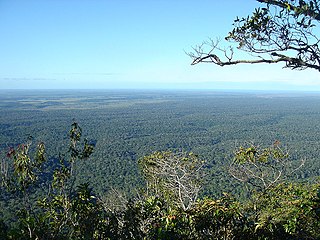 Monte Pascoal National Park is a national park in the state of Bahia, Brazil.

The Pau-Brasil Ecological Station (Portuguese: Estação Ecológica do Pau-Brasil is an ecological station in state of Bahia, Brazil. It protects a stand of endangered Brazil wood trees. 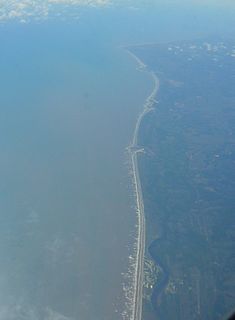 Corumbau Marine Extractive Reserve is a coastal marine extractive reserve in the state of Bahia, Brazil. The reserve was created in 2000 to help protect the traditional local fishing economy, which was suffering from predatory commercial fisheries. It includes an area of corals and rich marine biodiversity, and a breeding ground for humpback whales. Growth in tourism has caused a surge in real estate prices and introduced new social problems among the traditional residents.

The Una Wildlife Refuge is a wildlife refuge in the state of Bahia, Brazil. 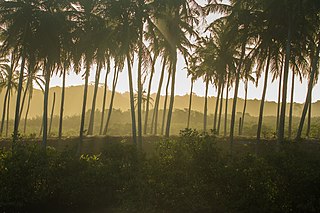 The Rio dos Frades Wildlife Refuge is a wildlife refuge in the state of Bahia, Brazil. It protects the land around the mouth of the Frades River. There is pressure, or opportunity, to develop the reserve for tourism.

The Frades River is a river in the state of Bahia, Brazil.

The Terreiro de Jesus is a plaza of great historic and cultural importance located in the Historic Center of Salvador de Bahia in Brazil. The square is located in the oldest part of the city and abuts the Praça da Sé. Officially the plaza is known as the Praça 15 de Novembro.