The U20 team acts mainly as a feeder team for the under-21s and provides further international development for youth players. The team qualified for its only official match, FIFA U-20 World Cup, depends on U19 results.

The Portuguese team has 12 participations in the FIFA U-20 World Cup and 12 in the Toulon Tournament.

The Golden Generation was the Generation of the players that won consecutive FIFA Youth Championships in 1989 and 1991.

The Courage Generation was the Generation of players that was runner up in the 2011 FIFA U-20 World Cup.

Rui Manuel César CostaOIH is a Portuguese former professional footballer who is the 34th president of sports club S.L. Benfica. He also succeeded Luís Filipe Vieira as president of the club's SAD board of directors.

Guarani Futebol Clube, colloquially called Guarani, is a Brazilian association football club in Campinas, São Paulo. Guarani is the only club from Brazil's countryside to have won the top tier of the Brazilian Championship. The team currently play in the Série B, the second tier of Brazilian football, as well as in the Campeonato Paulista Série A1, the top tier of the São Paulo state football league. 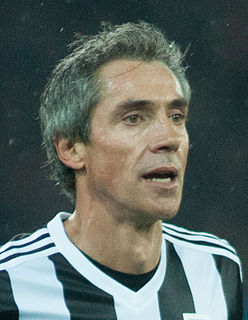 Gil Vicente Futebol Clube, commonly known as Gil Vicente, founded in 1924, is a Portuguese football club that plays in Barcelos. It competes in the Primeira Liga, the top division of football in the country, and it is named after the Portuguese playwright of the same name. The best seasons for the team was in 1999–2000 and 2021-22 Primeira Liga, when they finished fifth in the league.

The Brazil women's national football team represents Brazil in international women's football and is run by the Brazilian Football Confederation (CBF). It has participated in eight editions of the FIFA Women's World Cup, finishing as runner-up in 2007, and seven editions of the Copa América Femenina.

José Macia, better known as Pepe is a Brazilian former football player and manager. He is considered one of the greatest players in the history of Santos FC and one of the greatest left wingers of all time, being two-time World Champion in 1958 and 1962 and two-time World-Club Champion in 1962 and 1963 helping Santos FC defeat the iconic SL Benfica of Eusébio and the Milan of Cesare Maldini, Trapattoni, Rivera, Amarildo and Altafini in a best-of-three final.

Diamantino Manuel Fernandes Miranda, known simply as Diamantino in his playing days, is a Portuguese professional football manager and former player who played as a midfielder. He is the current manager of Mozambican club Liga Desportiva de Maputo.

Cristopher Benjamín Toselli Ríos is a Chilean footballer who plays as a goalkeeper for Central Córdoba.

The Brazil national under-20 football team, also known as Brazil Sub-20 or Seleção Sub-20, represents Brazil in association football at this age level and is controlled by the Brazilian Football Confederation (CBF).

The Brazil national under-17 football team, also known as Brazil Under-17s or Seleção Sub-17, represents Brazil in association football, at an under-17 age level and is controlled by the Brazilian Football Confederation, the governing body for football in Brazil. Their head coach is Phelipe Leal.

Rui Miguel Teixeira Caetano is a Portuguese former footballer who played as a left winger.

The Sociedade Esportiva Palmeiras Under 20s and Academy are the youth academy of Sociedade Esportiva Palmeiras, a Brazilian football club based in São Paulo. The youth sector is composed of various squads divided by age groups. The U-20 squad currently plays in the Campeonato Brasileiro Sub-20, the Copa do Brasil Sub-20 and the Copa São Paulo de Futebol Júnior. Palmeiras Academy Squads of all categories have won trophies at national and international level. The academy has produced many young successful players that have played in the youth levels of the Brazilian National team such as Gabriel Jesus.

The 2018 Toulon Tournament was an international association football tournament held in Bouches-du-Rhône, France. The twelve national teams involved in the tournament were required to register a squad of 20 players; only players in these squads were eligible to take part in the tournament.

Sandro Alexandre Forner is a Brazilian football manager and former player who played as a central defender. He is the current manager of Operário Ferroviário's under-20 squad.

The 2019 Toulon Tournament was an international association football tournament held in Bouches-du-Rhône, France. The twelve national teams involved in the tournament were required to register a squad of 22 players; only players in these squads were eligible to take part in the tournament.

The Portugal national youth football team are the national under-23, under-21, under-20, under-19, under-18, under-17, under-16 and under-15 football teams of Portugal and are controlled by the Portuguese Football Federation. The youth teams of Portugal participate in tournaments sanctioned by both FIFA and UEFA and also participates in world, regional, and local international tournaments.