São Tomé and Príncipe islands were a colony of the Portuguese Empire from its discovery in 1470 until 1975, when independence was granted by Portugal.

The Portuguese explorers João de Santarém and Pêro Escobar discovered the islands around 1470, [1] which they found uninhabited. [2] The São Tomé island was named by the Portuguese in honor of Saint Thomas, as they discovered the island on his feast day, while the Príncipe island (Prince's island) was named in honor of Afonso, Prince of Portugal, his father's favorite. [1]

The first attempt of settlement in the islands began in 1485, when the Portuguese Crown granted to João de Paiva the São Tomé island. However, this attempt was not successful, because the settlers were unable to produce food in the specific conditions and climate that the islands offered, and because of the tropical diseases that affected the settlers. [1] It was only in 1493 when King John II of Portugal nominated Álvaro Caminha as captain-major of São Tomé island, that the first successful settlement was established. [1] Among these Portuguese settlers, there was a significant portion of criminals and orphans, as well as Jewish children taken from their parents to ensure that they were raised as Christians. [3] Settlement of the Príncipe island was initiated in 1500. [1]

In the following years, the Portuguese settlers started to import large numbers of slaves from mainland Africa to cultivate the rich volcanic soil of São Tomé island with highly profitable sugar cane. By the middle of the 16th century São Tomé generated enormous wealth to Portugal when it became the world's largest producer of sugar. [4] The islands humid climate allowed the quick growth of sugar, but prevented the production of higher quality white sugar. [5]

In the first decade of the 17th century, the competition of sugar plantations from the Portuguese colony of Brazil and the frequent slave revolts that occurred in the island, begun to slowly hurt the sugar crop cultivation, [1] This meant the decline of sugar production, and the shifting of the local economy towards the slave trade, who remained mostly in the hands of the local mestiço population. [2] [4] The geographical location of the islands made them a crucial trading post of the transatlantic slave trade, as they served as an assembly point of the slaves brought from the Gulf of Guinea and the Kingdom of Kongo and destined to the Americas. [4] [6]

The Dutch occupied the São Tomé island in 1641, until 1648 when the Portuguese took back the island. [6] The Dutch, however, did not take Príncipe island. [6]

Most Portuguese settlers married African women. Europeans never numbered more than 1000 at their peak in the 16th century, and by the 18th century, prosperous and influential local Afro-Portuguese mulatos came to fill important local positions, such as cathedral chapter and the town-hall, into which they had been admitted as early as 1528. [7] Some were indistinguishable from mainland native Africans, who claimed to be brancos da terra, literally, "the lands whites" on account of their ancestry. [8]

At the beginning of the 19th century, the Portuguese introduced coffee and cocoa in extensive large-scale plantations called roças, thus giving a great boost to the economy. The coffee production cycle ended in the late 19th century, when it was replaced by cocoa as the islands' main production. São Tomé and Príncipe then became a major global cocoa production area for several generations, and in the first decades of the 20th century, it was frequently the world's annual number one cocoa producer. [2]

In 1972, a nationalist political party of Marxist ideology, the Movement for the Liberation of São Tomé and Príncipe (MLSTP), was created by exiles in Equatorial Guinea with the intent of creating an independent nation. The Carnation Revolution in 1974 ended the Estado Novo dictatorship in Portugal and initiated a process of decolonization of the Portuguese colonies in Africa. On 12 July 1975, the new Portuguese regime granted independence to São Tomé and Príncipe. [6] 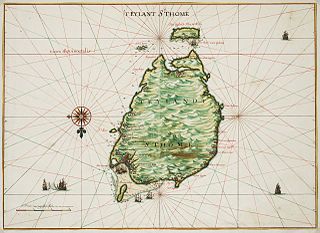 The islands of São Tomé and Príncipe were uninhabited at the time of the arrival of the Portuguese sometime between 1469 and 1471. After the islands were discovered by the explorers João de Santarém and Pêro Escobar, Portuguese navigators explored the islands and decided they would be a good location for bases to trade with the mainland. 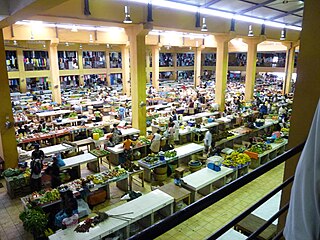 The economy of São Tomé and Príncipe, while traditionally dependent on cocoa, is experiencing considerable changes due to investment in the development of its oil industry in the oil-rich waters of the Gulf of Guinea. 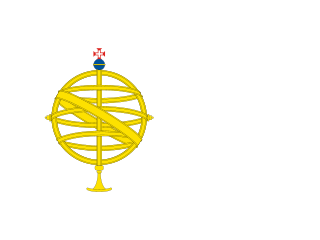 São Tomé is the capital and largest city of the Central African island country of São Tomé and Príncipe. Its name is Portuguese for "Saint Thomas". Founded in the 15th century, it is one of Africa's oldest colonial cities.

Príncipe is the smaller, northern major island of the country of São Tomé and Príncipe lying off the west coast of Africa in the Gulf of Guinea. It has an area of 142 square kilometres (55 sq mi) and a population of 7,324 at the 2012 Census; the latest official estimate was 8,420. The island is a heavily eroded volcano speculated to be over three million years old, surrounded by smaller islands including Ilheu Bom Bom, Ilhéu Caroço, Tinhosa Grande and Tinhosa Pequena. Part of the Cameroon Line archipelago, Príncipe rises in the south to 947 metres at Pico do Príncipe. The island is the main constituent of the Autonomous Region of Príncipe, established in 1995, and of the coterminous district of Pagué. 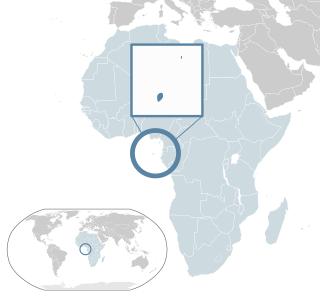 Forro Creole or Sãotomense is a Portuguese creole language spoken in São Tomé and Príncipe. It is also called by its native speakers as sãotomense creole or santomense creole. 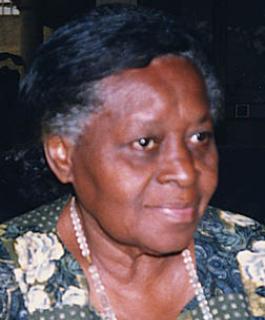 Alda Neves da Graça do Espírito Santo, known as Alda do Espírito Santo or Alda Graça, was a poet from São Tomé e Príncipe working in the Portuguese language. She also served in the Santomean government after the country's independence. 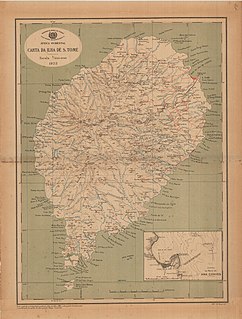 João de Santarém was a Portuguese explorer who discovered São Tomé, Annobón and Príncipe. Together with Pêro Escobar, he also encountered the town of Sassandra in the Ivory Coast in 1471 and in 1472 explored the African land from Ghana up to the Niger Delta. From 1484 he was captain of Alcatrazes in Cape Verde. 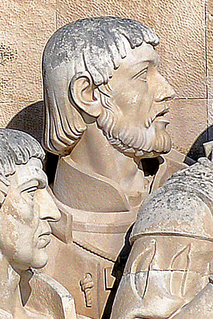 Pedro Escobar, also known as Pêro Escobar, was a 15th-century Portuguese navigator who discovered São Tomé, Annobón, Príncipe islands, together with João de Santarém c. 1470. He is then recorded sailing with Diogo Cão on his first voyage in 1482, and as the pilot of the famous Bérrio caravel on Vasco da Gama’s first expedition in 1497 to sail directly from Europe to India. He was also on Pedro Álvares Cabral’s discovery of Brazil in 1500.

The Fort of São João Baptista de Ajudá is a small restored fort in Ouidah, Benin. Built in 1721, it was the last of three European forts built in that town to tap the slave trade of the Slave Coast. Following the legal abolition of the slave trade early in the 19th century, the Portuguese fort lay abandoned most of the time until it was permanently reoccupied in 1865. 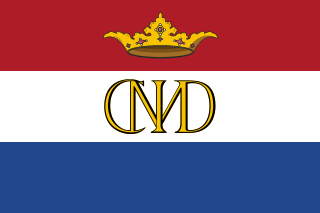 Dutch Brazil, also known as New Holland, was the northern portion of the Portuguese colony of Brazil, ruled by the Dutch during the Dutch colonization of the Americas between 1630 and 1654. The main cities of the Dutch colony of New Holland were the capital Mauritsstad, Frederikstadt, Nieuw Amsterdam (Natal), Saint Louis, São Cristóvão, Fort Schoonenborch (Fortaleza), Sirinhaém, and Olinda.

This is a timeline of Portuguese São Tomé and Príncipe from its discovery between mid-January 1469 to 1471 to independence on July 12, 1975. It includes the time when the island was under Dutch and French occupations and the separate colonies of São Tomé and Príncipe up to its unification in 1753. 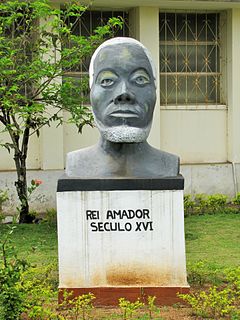 Amador Vieira, best known as Rei Amador, was a member of the king of the Angolars and leader of a famous slave rebellion that took place in 1595 in the African islands of São Tomé and Príncipe. According to some historic documents, Rei Emadir was "a slave" who avoided slavery and mobilized all the Angolares along with other Africans and made a free nation under the middle of the aforementioned islands.