The Postcode Address File (PAF) is a database that contains all known "Delivery Points" and postcodes in the United Kingdom. The PAF is a collection of over 29 million Royal Mail postal addresses and 1.8 million postcodes. [1] It is available in a variety of formats including FTP download and compact disc, and was previously available as Digital Audio Tape. As owner of the PAF, Royal Mail is required by section 116 of the Postal Services Act 2000 to maintain the data and make it available on reasonable terms. A charge is made for lookup services or wholesale supply of PAF data. Charges are regulated by Ofcom. It includes Small User Residential, Small User Organisation and Large User Organisation details. There have been requests as part of the Open Data campaign for the PAF to be released by the government free of charge. [2]

The "delivery points" held on the PAF are routing instructions used by Royal Mail staff to sort and deliver mail quickly and accurately. Elements of the address, including the post town and postcode, are occasionally subject to change, reflecting the operational structure of the postal delivery system. Each address is therefore not necessarily a geographically accurate description of where a property is located. [3] Buildings which contain internal flats or businesses but have only one external front door will only have those internal elements recorded in PAF if the Royal Mail have direct access to them using a key or fob.

The PAF licence sets out what PAF can be used for. Licensing options include internal and external use and also more advanced options such as bureau services and broker groups.

An example of typical internal use is an employee of a licensed call centre who uses a PAF-based solution to look up and verify customer addresses. The PAF data is only being used within the licensed end-user and is not passed on to any other legal entity.

On the other hand, an example of external use would be a company which provides a PAF-based address look-up on their customer facing website for their own customers to use when they order goods or services.

Any organisation wishing to apply can do so now through Royal Mail's Address Management Unit. The Public Sector Licence will be in place for an initial three years.

The Alias File is a supplementary file containing additional data which are not part of official postal addresses, including details that have changed over time, or have been amended by the public and then used. This file is used to identify these elements and cross-reference with the official postal address.

Royal Mail, in their guide to the data products [6] imply that the county alias information was provided when Royal Mail removed the former postal county from the main file.

Royal Mail acknowledges that the PAF contains errors, and publishes forms for submitting error reports. A very small number of addresses are not listed correctly, and others (especially new developments) may not be listed at all for a period of time.

Between 2004 and 2006 a consultation was taken about the future management of the PAF. The proposal to release it for use at low or no cost was rejected, and the business model where it was used to raise money from profitable corporations was retained. [7]

Following a Government consultation, [9] on 1 April 2010 Ordnance Survey released co-ordinate data for all Great Britain postcodes (but not their address elements) for re-use free of charge under an attribution-only licence, as part of OS OpenData. 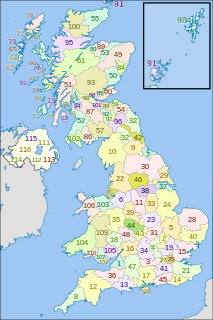 In a postal system, a delivery point is a single mailbox or other place at which mail is delivered. It differs from a street address, in that each address may have several delivery points, such as an apartment, office department, or other room. Such buildings are often called multiple-dwelling units (MDUs) by the USPS.

The IG postcode area, also known as the Ilford postcode area, is a group of eleven postcode districts in England, within six post towns. These cover parts of eastern Greater London and south-west Essex. Inward mail for the area is sorted, along with mail for the E and RM postcode areas, at the Romford Mail Centre.

In the United Kingdom, the postcode lottery is the unequal provision of services such as healthcare, education and insurance prices depending on the geographic area or postcode. Postcodes can directly affect the services an area can obtain, such as insurance prices. Despite having many non-postal uses, postcodes are only determined based on Royal Mail operations and bear little relation to local government boundaries. More broadly, there is an unequal provision of services around the country, especially in public services, such as access to cancer drugs in the healthcare system or quality of education. These are more likely to be a result of local budgets and decision-making than actual postcodes.

The GU postcode area, also known as the Guildford postcode area, is a group of 38 postcode districts in South East England, within 24 post towns. These cover west Surrey, north-east Hampshire, northwestern West Sussex and a small part of south-east Berkshire.

The TN postcode area, also known as the Tunbridge Wells postcode area, is a group of 40 postcode districts in England, within 24 post towns. These cover south Kent and northern and eastern East Sussex, plus very small parts of Surrey and the London Borough of Bromley.

The One Scotland Gazetteer is the definitive national land, property and address dataset for Scotland that is published by Spatial Information Service within the Improvement Service. It is compiled using information from all 32 Scottish councils and produced to common standards and specification. It is not to be confused with the Royal Mail Postcode Address File (PAF) which is only a list of mail delivery locations.