Poulaphouca Reservoir, officially Pollaphuca (from Irish : Poll a' Phúca, meaning 'the Púca 's hole'), [1] [2] is an active reservoir (for both water supply and electricity generation) and area of wild bird conservation in west County Wicklow, Ireland named after the Poulaphouca waterfall on its south-western end where the water exits the lake. The lake is also commonly known as the Blessington Lakes, even though there is just one.

It was created between 1937 and 1947, with flooding beginning at 10 am on 3 March 1940 by damming the River Liffey at Poulaphouca as part of the Electricity Supply Board project to build a second hydroelectric station in Ireland, Ardnacrusha on the River Shannon being the first.

The reservoir is one of two major sources of Dublin's water supply, the other major supply being Vartry Reservoir in east Wicklow.

Between 1938 and 1940, 76 houses were demolished, and the bridges at Humphreystown, Baltyboys, and Burgage blown up, in anticipation of the flooding of the valley for the Poulaphouca hydroelectric power station.

The Kaplan turbines of the Poulaphouca station were delivered by the Swiss manufacturer Ateliers des Charmilles from Geneva, Switzerland. Each turbine has a capacity of 25,300 horsepower at a hydraulic head of 50.5 m. The contract was executed in collaboration with English Electric from London. [5]

A ridge of land, on which the village of Valleymount lies, divides the southern part of the reservoir.

The goosander, recently arrived as a breeding species in Ireland, can sometimes be seen here.

The Blessington Greenway walk is 6.5 km in length and links the historic town of Blessington with the Palladian mansion at Russborough House. The trail starts in Blessington village and leads south to the Avon Ri Activity Centre at the southern end of the town and weaves its way along the lake shores and forestry, crosses an ancient medieval Ringfort, and then uses the footpath along part of the N81 before turning back into the forest at Burgage Moyle lane. The Greenway follows the lakeshore and phase 2 is underway, with the goal of a 30 km greenway around the reservoir for walking, cycling and other recreational activities. 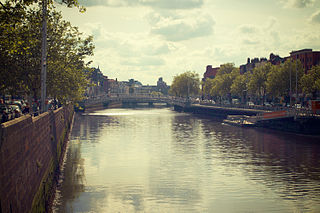 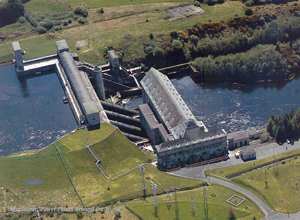 The Shannon hydroelectric Scheme was a major development by the Irish Free State in the 1920s to harness the power of the River Shannon. Its product, the Ardnacrusha power plant, is a hydroelectric power station which is still producing power today and is located near Ardnacrusha within County Clare approximately 2.4 kilometres (1.5 mi) from the Limerick border. It is Ireland's largest river hydroelectric scheme and is operated on a purpose built headrace connected to the River Shannon. The plant includes fish ladders so that returning fish, such as salmon, can climb the river safely past the power station.

The Electricity Supply Board is a state owned electricity company operating in Ireland. While historically a monopoly, the ESB now operates as a commercial semi-state concern in a "liberalised" and competitive market. It is a statutory corporation whose members are appointed by the Government of Ireland. 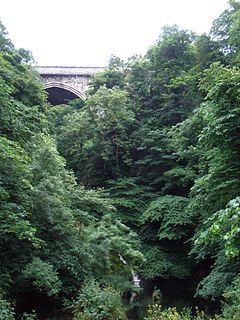 Poulaphouca, officially Pollaphuca, is the name of a waterfall and bridge on the River Liffey between County Wicklow and County Kildare. It is primarily known for its hydroelectric generating station and the associated artificial lake, known as Poulaphouca Reservoir, Poulaphouca Lake, or Blessington Lakes. The once-famous Poulaphouca Waterfall has little water running over it any longer because of the hydroelectric project. 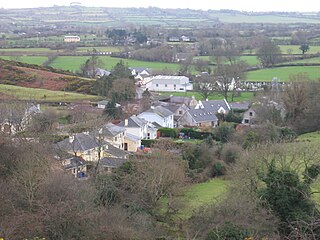 Run-of-river hydroelectricity (ROR) or run-of-the-river hydroelectricity is a type of hydroelectric generation plant whereby little or no water storage is provided. Run-of-the-river power plants may have no water storage at all or a limited amount of storage, in which case the storage reservoir is referred to as pondage. A plant without pondage is subject to seasonal river flows, thus the plant will operate as an intermittent energy source. Conventional hydro uses reservoirs, which regulate water for flood control, dispatchable electrical power, and the provision of fresh water for agriculture.

Štěchovice Reservoir is a dam on Vltava River built from 1937 to 1945 as the second stage of the Vltava Cascade. The dam is named after nearby village Štěchovice. 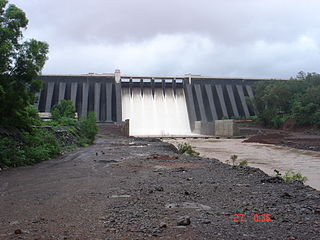 The Sup'ung Dam, also referred to as the Shuifeng Dam and originally the Suihō Dam, is a gravity dam on the Yalu River between Kuandian Manchu Autonomous County, Liaoning Province in China and Sakju County, North Pyongan Province in North Korea. The dam was constructed by the Japanese between 1937 and 1943 in order to generate electricity and has been repaired and renovated several times throughout the years, mainly due to spillway damage from flooding.

The Kyiv Pumped-Storage Power Plant is a pumped-storage power station on the west bank of the Kyiv Reservoir in Vyshhorod, Ukraine. The Kyiv Reservoir serves as the lower reservoir and the upper reservoir is located 70 m (230 ft) above the lower. Water sent from the upper reservoir generates electricity with three 33.3 megawatts (44,700 hp) conventional hydroelectric generators and three 45 megawatts (60,000 hp) reversible pump-generators. During periods of low demand, such as night time, the pump-generators push water from the lower reservoir to the upper for use during peak hours. The first generator was commissioned in 1970, the last in 1972. 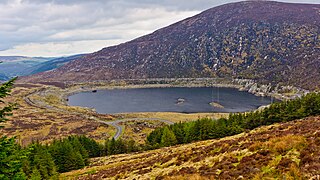 The Turlough Hill Power Station is a pumped storage power station in Ireland, owned and operated by the Electricity Supply Board (ESB).

Aguieira Dam also known as Foz do Dão Dam is a concrete multiple arch dam on the Mondego River, where the river forms the border line between the districts of Coimbra and Viseu. It is located in the municipality Penacova, in Coimbra District, Portugal.

Masinga Hydroelectric Power Station, also Masinga Dam, is an embankment dam on the Tana River, the longest river in Kenya. It straddles the border of Embu and Machakos Counties in Eastern Province and is located about 106 km. (66 mi.), by road, northeast of Nairobi, Kenya's capital and largest city. 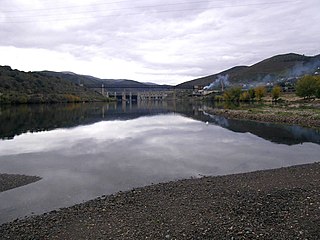 Pocinho Dam is a concrete gravity dam on the Douro, where the river forms the border line between the districts of Guarda and Bragança. It is located in the municipality Vila Nova de Foz Côa, in Guarda District, Portugal. 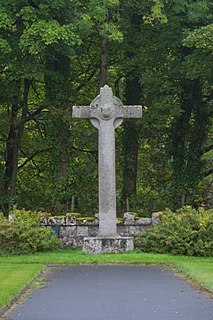