Power Rangers Mystic Force is the fourteenth season of the American television series Power Rangers , based on the Japanese 29th Super Sentai tokusatsu series. [1] The season premiered on February 20, 2006 as part of the Jetix block on Toon Disney. The season is an adaptation of Mahō Sentai Magiranger , and is the only Disney-produced season to feature the main villain from its Super Sentai counterpart.

Twenty years ago, in a magic-filled dimension, the forces of darkness came into power. And a war called the "Great Battle" between good and evil began all while the citizens of the human world remained unaware. An army of monsters, led by a magnificent warrior named Morticon, swarmed the land with their sights set on taking over the magical realm, the human realm, and beyond. The army of Morticon, opposed by five wizards, The most powerful wizard of all Leanbow, cast a spell to pushed back the dark forces and closes the walls of the underworld forever. The Gatekeeper seal the gates for all eternity. The army of authenticity successfully thwarted the dark forces' attempt to take the surface world, but the five wizards lost their lives. The Leanbow, who sealed himself on their side of the Gate to make sure evil sources do not escape, journeys to the underworld.

In the present day, the city of Briarwood is struck by an earthquake, which proved powerful to crack the seal and allow evil to renew its attempt to invade the Earth. The sorceress Udonna alerted to their return, sought out the warriors of legend, five teens living in Briarwood, to become the Power Rangers alongside her. While one of the teens was reluctant at first, he realized his destiny and joined the others in the fight against the Master of the Underworld and his numerous minions.

When Udonna loses her Ranger powers to the mysterious Koragg, it is up to Nick, Chip, Xander, and sisters Madison and Vida to save the Earth on their own. They were assisted by Udonna's bumbling apprentice, Clare, and eventually Jenji the Genie Cat and his master Daggeron, the Solaris Knight join the team.

Using their powerful magic and incredible martial arts skills, the Mystic Force Rangers must rely on teamwork to save the day. Later, in a shocking surprise, it is revealed that Koragg is none other than Leanbow, the greatest and the strongest of the five original wizards. In a fight with Udonna, koragg takeover Udonna magical staff filled with the power of goodness. Over time, Udonna's magical staff, helps Koragg turn back to his original self, allowing him to use his powers to transform into the Wolf Warrior. In the end, the Rangers come together to defeat the Master of the Underworld with the help of Briarwood's people with the power of truth and goodness. With the forces of darkness defeated, Nick, Udonna, and Leanbow leave Briarwood to meet Nick's adoptive parents while the remaining Rangers stay behind to protect their home.

Mighty Morphin Power Rangers is an American superhero television series that premiered on August 28, 1993, on the Fox Kids programming block. It is the first entry of the Power Rangers franchise, and became a 1990s pop culture phenomenon along with a large line of toys, action figures, and other merchandise. The show adapted stock footage from the Japanese TV series Kyōryū Sentai Zyuranger (1992-1993), which was the 16th installment of Toei's Super Sentai franchise. The second and third seasons of the show drew elements and stock footage from Gosei Sentai Dairanger and Ninja Sentai Kakuranger, respectively, though the Zyuranger costumes were still used for the lead cast in these two seasons. Only the mecha and the Kiba Ranger costume from Dairanger were featured in the second season while only the Kakuranger mecha was featured in the third season, though the Kakuranger costumes were later used for the mini-series Mighty Morphin Alien Rangers. The series was produced by MMPR Productions and distributed by Saban Entertainment, while the show's merchandise was produced and distributed by Bandai Entertainment. The series was well known for its campy tone. 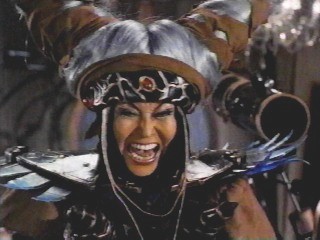 Rita Repulsa is a fictional character from the television series Mighty Morphin Power Rangers, and the principal nemesis and archenemy of the main superheroes in the show's first season. She is portrayed in the first season by Machiko Soga and by Carla Perez in the remaining seasons, while voiced by Barbara Goodson in the series. Soga reprised her role as Rita, now the Mystic Mother, while Susan Brady provided her voice in the TV series Power Rangers Mystic Force. In the films, she is portrayed by Julia Cortez in Mighty Morphin Power Rangers: The Movie, and by Elizabeth Banks in the 2017 reboot film. Rita Repulsa is based on the Kyōryū Sentai Zyuranger villain Witch Bandora.

Power Rangers in Space is an American television series and the sixth season of the Power Rangers franchise, based on the 21st Super Sentai series Denji Sentai Megaranger.

Power Rangers Lost Galaxy is an American television series and the seventh season of the Power Rangers franchise, based on the 22nd Super Sentai series Seijuu Sentai Gingaman. The series was the first to follow the Sentai tradition of a new cast with each new series. 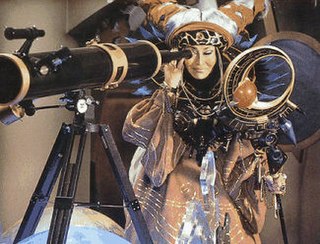 Machiko Soga was a Japanese actress and voice actress.

Melanie Vallejo is an Australian actress who is best known for portraying Madison Rocca, the Blue Mystic Ranger in Power Rangers Mystic Force, and Sophie Wong in the Australian television series Winners & Losers.

Yin Yang Yo! is an American–Canadian flash-animated television series created by Bob Boyle for Jetix. Produced by Jetix Animation Concepts as the third original Jetix show, it first aired on August 26, 2006 as a sneak peek and premiered on September 4, 2006 in the United States. The show debuted on Jetix in the United Kingdom on February 5, 2007 after a sneak peek preview on January 27, 2007 while making its Canadian television premiere on Family Channel on March 25, 2007. The series is supplied with writers and animators' staff associated with The Fairly OddParents, 6teen, Clone High and Danny Phantom. Head writer Steve Marmel, an anime fan, took an inspiration from various anime like FLCL and anime-influenced shows such as Teen Titans. The series centers on two anthropomorphic twin rabbits named Yin and Yang, and their sensei-like panda figure named Yo, a master of fictional mystical martial arts called Woo Foo. 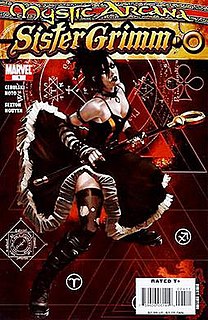 Mystic Arcana is a 2007 Marvel Comics storyline published as a series of four one-shot titles. Each book in the series contains an individual main story followed by a back-up story with a plot that continues through all four books. The main story in each book focuses on a different fictional character, each of whom has had associations with magic in previous Marvel publications. The four characters featured are Magik, the Black Knight, the Scarlet Witch, and Sister Grimm. Artist Marko Djurdjevic illustrated the cover for each issue.

Power Rangers Operation Overdrive is the fifteenth season of the American television franchise Power Rangers. The season uses footage and other material from the 30th Super Sentai series GoGo Sentai Boukenger, which celebrates the thirtieth anniversary of that franchise. In addition, this season's team-up episode, "Once a Ranger", commemorates the fifteenth anniversary of the Power Rangers franchise. The season premiered on February 26, 2007, on Toon Disney's Jetix programming block. It was the first season to use high definition footage from the Super Sentai franchise, although this footage was scaled down to 4:3 aspect ratio.

Power Rangers Dino Charge is the twenty-second season of the long-running American television program Power Rangers. Using footage, costumes and props from Japanese 37th Super Sentai Series Zyuden Sentai Kyoryuger, it is the first season to be distributed by Saban Brands Entertainment Group, after the formation of two new units within the company called Saban Brands Lifestyle Group and Saban Brands Entertainment Group on December 11, 2014. The show is produced by SCG Power Rangers and began airing on Nickelodeon on February 7, 2015, ending on December 12. It also went broadcast on Pop in 2018. Broadcast from May 25, 2015 on Canal J. From June 9, 2015 on Gulli.

Power Rangers Dino Fury is the twenty-eighth season of the American children's television program Power Rangers. The season premiered on Nickelodeon on February 20, 2021.