Powys ( /ˈpoʊɪs,ˈpaʊɪs/ ; Welsh:  [ˈpowɪs] ) [1] is a county and preserved county in Wales. [2] It is named after the Kingdom of Powys which was a Welsh successor state, petty kingdom and principality that emerged during the Middle Ages following the end of Roman rule in Britain.

Powys covers the historic counties of Montgomeryshire and Radnorshire, most of Brecknockshire, and part of historic Denbighshire. With an area of about 2,000 square miles (5,200 km2), it is now the largest administrative area in Wales by land and area (Dyfed was until 1996 before several former counties created by the Local Government Act 1972 were abolished). It is bounded to the north by Gwynedd, Denbighshire and Wrexham County Borough; to the west by Ceredigion and Carmarthenshire; to the east by Shropshire and Herefordshire; and to the south by Rhondda Cynon Taf, Merthyr Tydfil County Borough, Caerphilly County Borough, Blaenau Gwent, Monmouthshire and Neath Port Talbot.

The largest towns are Newtown, Ystradgynlais, Brecon, Welshpool, Llandrindod Wells and Knighton. Powys has the lowest population density of all the principal areas of Wales. Most of Powys is mountainous, and most roads and railways are relatively slow.

Just under a third of the residents have Welsh linguistic skills: Welsh speakers are concentrated mainly in the rural areas both in and around Machynlleth, Llanfyllin and Llanrhaeadr-ym-Mochnant (where William Morgan first translated the whole Bible into Welsh in 1588) in Montgomeryshire, and the industrial area of Ystradgynlais in the southwest of Brecknockshire. Radnorshire was almost completely anglicised by the end of the 18th century. The 2001 census records show 21% of the population of Powys were able to speak Welsh at that time, the same as for the whole of Wales. [3]

The county is named after the ancient Welsh Kingdom of Powys, which in the sixth century AD included the northern two-thirds of the area as well as most of Shropshire and adjacent areas now in England, and came to an end when it was occupied by Llywelyn ap Gruffudd of Gwynedd during the 1260s.

The uplands retain evidence of occupation from long before the Kingdom of Powys, and before the Romans, who built roads and forts across the area. There are 1130 identified burial mounds within the county, of varying styles and ages, dating from 4000 BC to 1000 BC, most of them belonging to the Bronze Age. [4] Of these, 339 are scheduled monuments. Standing stones, most again dating to the Bronze Age, also occur in large numbers, 276 being found across the county, of which 92 are scheduled. From the Iron Age, the county has 90 scheduled hillforts and a further 54 enclosures and settlement sites.

Powys is served by the Cambrian Line and Heart of Wales line which offer connections to major towns and cities such as Swansea, Wrexham, Shrewsbury, Birmingham, Wolverhampton, Manchester, Cardiff, Aberystwyth, London and Telford. The county used to be served by key railways such as the Mid-Wales Railway, Oswestry and Newtown Railway, Tanat Valley Light Railway, Llanfyllin Branch, Leominster and Kington Railway, Swansea Vale Railway and the Hereford, Hay and Brecon Railway, all of which offered connections to South Wales, Hereford, Oswestry, North Wales and West Wales but have all since closed.[ citation needed ]

The gold in the county coat of arms symbolises the wealth of the area. Black is for both mining and the Black Mountains. The fountain is a medieval heraldic charge displayed as a roundel barry wavy argent and azure. It represents water and refers to both the water catchment area and the rivers and lakes. Thus, the arms contain references to the hills and mountains, rivers and lakes, water supply and industry. The crest continues the colouring of the arms. A tower has been used in preference to a mural crown, which alludes to the county's military history and remains. From the tower rises a red kite, a bird almost extinct elsewhere in Britain but thriving in Powys. The bird is a " semé of black lozenges" for the former coal mining industry, while the golden fleece it carries is a reference to the importance of sheep rearing in the county. [5]

The county motto is: Powys – the paradise of Wales (Welsh : Powys Paradwys Cymru).

On 1 April 1974, Powys was created under the Local Government Act 1972. At first, the former administrative counties of Montgomery, Radnor, and Brecknock were districts within it. On 1 April 1996, the districts were abolished, and Powys was reconstituted as a unitary authority. There was a minor border adjustment in the northeast—specifically, the addition of the communities of Llansilin and Llangedwyn from Glyndŵr district in Clwyd —and with moving the border, so that rather than half of Llanrhaeadr-ym-Mochnant, all is included.

In December 2007, Powys was awarded Fair Trade County status by The Fairtrade Foundation. [8] 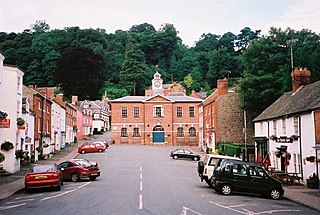 Montgomeryshire, also known as Maldwyn, is one of thirteen historic counties and a former administrative county of Wales. It is named after its county town, Montgomery, which in turn is named after one of William the Conqueror's main counsellors, Roger de Montgomerie, who was the 1st Earl of Shrewsbury.

Radnorshire is one of the thirteen historic counties of Wales and a former administrative county. It covers a sparsely populated area in mid Wales. The historic county was bounded to the north by Montgomeryshire and Shropshire, to the east by Herefordshire, to the south by Brecknockshire and to the west by Cardiganshire.

Rhayader is a market town and community in Powys, Wales, within the historic county of Radnorshire. The town is 20 miles (32 km) from the source of the River Wye on Plynlimon, the highest point of the Cambrian Mountains, and is located at the junction of the A470 road and the A44 road 13 miles (21 km) north of Builth Wells and 30 miles (48 km) east of Aberystwyth. 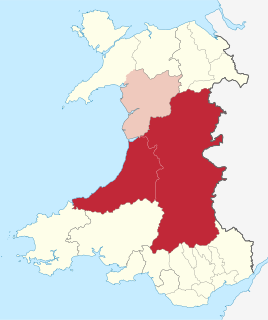 Mid Wales or Central Wales refers to a region of Wales, encompassing its midlands, in-between North Wales and South Wales. The Mid Wales Regional Committee of the Senedd covered the unitary authority areas of Ceredigion and Powys and the area of Gwynedd that had previously been the district of Meirionnydd. A similar definition is used by the BBC. The Wales Spatial Plan defines a region known as "Central Wales" which covers Ceredigion and Powys.

Llanelwedd[ɬanˈɛlwɛð] is a village and community near Builth Wells, in Powys, Wales. It lies within the historic boundaries of Radnorshire. Llanelwedd features the Royal Welsh Showground. 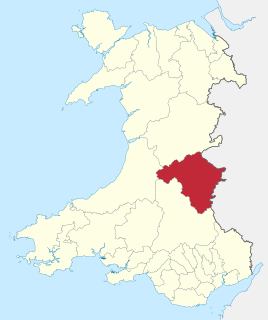 Powys County Council is the local authority for Powys, one of the administrative areas of Wales. The County Hall is in Llandrindod Wells.

The Montgomeryshire Yeomanry was a Welsh auxiliary unit of the British Army first formed in 1803. It provided volunteers to the Imperial Yeomanry during the Second Boer War and formed three regiments for service during World War I. It was broken up and converted to infantry and artillery in 1920.

The Mid Wales South League is an association football league, currently consisting of five clubs, mainly from Mid Wales but some from just over the border in England. It is currently called the Watson Financial Mid Wales League (South) for sponsorship reasons. 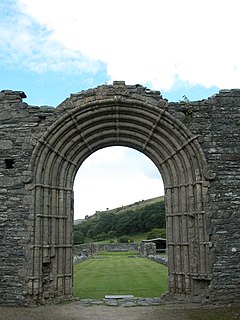 Stephen W Williams or Stephen Williams (1837–1899) was a civil engineer and architect who worked mainly in Radnorshire and Breconshire, Wales. He was county surveyor of Radnorshire from 1864 to 1899. He had offices at Rhayader and lived at Penralley House, Rhayader, He became a noted authority on the archaeology of the Cistercian Monasteries in Wales and undertook excavations at Strata Florida Abbey in Ceredigion, Abbey Cwm Hir in Radnorshire and Strata Marcella near Welshpool in Montgomeryshire. He was appointed High Sheriff of Radnorshire in 1899.

The Radnorshire Challenge Cup is a football knockout tournament competed for by clubs either based within the Mid-Wales county boundary of Radnorshire or have a team in membership of the Mid Wales South League.

Wikivoyage has a travel guide for Powys .