The Prague derby (Czech : Pražské derby) or Derby of the Prague S (Czech : Derby pražských S) is a football match between local Prague rivals SK Slavia Prague and AC Sparta Prague. The two clubs are considered to be the most successful in the Czech football, having won league and cup titles multiple times. The two were both founded in the late 19th century, Slavia one year before their rivals in 1892, though Slavia did not play football until four years later. The first match between the teams was played on 29 March 1896, with the game finishing 0–0. [1] The two clubs are the most successful and famous in the country and their dominance has led the derby to be referred in a similar way as the Scottish Old Firm.[ citation needed ]

Karel Poborský is a Czech former professional footballer who played as a right winger. He was most noted for his technical ability and pace. 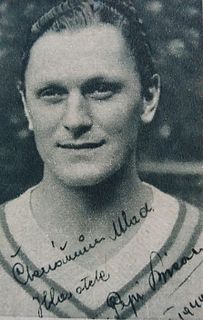 FC Slovan Liberec, commonly referred to as Slovan Liberec or simply Slovan, is a Czech football club founded in the city of Liberec. The club is one of the most successful in the Czech Republic, having won three league titles and the domestic cup since 1993. Glass-making company Preciosa a.s. is the current main sponsor of the club.

Vítězslav Lavička is a Czech football manager and former player. He has been the manager of Polish club Śląsk Wrocław. 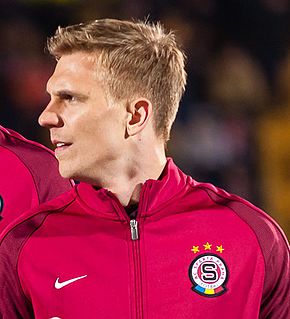 Bořek Dočkal is a Czech professional footballer who plays as a midfielder and captains Sparta Prague. He has previously spent time with Turkish side Konyaspor and Norwegian side Rosenborg. Dočkal represented the Czech Republic at youth international level, and was the captain of the under-21 team, and has later become captain of his nation at senior level.

Ruslan Kamilyevich Mingazov is a Turkmenistani footballer who plays for FC Caspiy, and the Turkmenistan national football team, as a right or left midfielder.

The Czech Women's First League is the top level women's football league of the Czech Republic. The league is dominated by teams of Prague. Sparta Prague won the last championships, Slavia Prague was runner-up. The winning team, runners-up and third-place team of the league qualifies for the UEFA Women's Champions League. 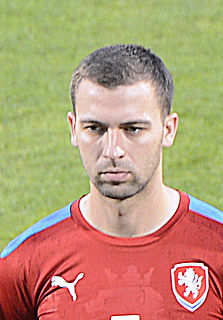 Josef Hušbauer is a Czech professional football midfielder who plays for Cypriot First Division club Anorthosis Famagusta. A product of the Sparta Prague football academy, Hušbauer represented his country at various age groups before making his international debut for the Czech Republic in 2012. 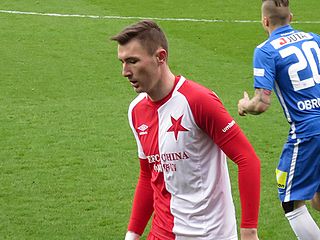 Jaromír Zmrhal is a Czech professional football who plays as a midfielder for Slovan Bratislava. He can play as a central midfielder or left winger. 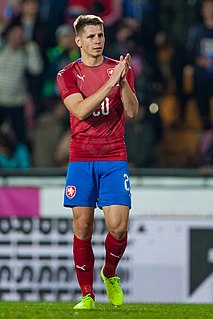 Lukáš Masopust is a Czech football player who currently plays for Slavia Prague in the Czech First League and the Czech Republic national team. 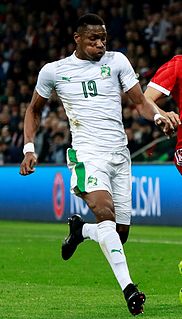 Simon Désiré Sylvanus Deli is an Ivorian professional footballer who plays as a centre back for Club Brugge and the Ivory Coast national team.

The 2020–21 Czech First League, known as the Fortuna liga for sponsorship reasons, is the 28th season of the Czech Republic's top-tier football for professional clubs since its establishment in 1993. Slavia Prague have won their twenty-first league title which was their fourth in the last five years. The season was initially scheduled to start on 11 July but was delayed until 21 August as a consequence of the postponement of the previous season's conclusion due to the outbreak of COVID-19. The first half of the season only had 15 rounds and finished on 19 December, while the spring half commenced on 29 January 2021, the earliest such date in league history.

The 2021–22 Czech First League, known as the Fortuna liga for sponsorship reasons, will be the 29th season of the Czech Republic's top-tier football for professional clubs since its establishment, in 1993. Slavia Prague are the reigning champions. The season is scheduled to start on 24 July 2021. The first half of the season will have 19 rounds, finishing on 19 December 2021, and the other half will commence early in February 2022.