Under the 1901 constitution, Cuba had a presidential system based on that of the United States.

In 1940, a new constitution reformed the government into a semi-presidential system, 18 years before its modern archetype – the French Fifth Republic – came into being.

On 2 December 1976, the executive was reformed again by a new national constitution, this time in emulation of the Soviet Union. The presidential office was abolished and replaced by a collective head of state, the Council of State, elected by the National Assembly of People's Power. However, unlike the USSR's arrangements, where the chairmen of the Presidium of the Supreme Soviet and the Council of Ministers were distinct posts, the chairman of the Council of State also chaired the Council of Ministers. Furthermore, unlike English and Russian, Spanish does not distinguish between the terms "chairman/председатель" and "president/президент", translating both as "presidente". Thus, when back-translated into English, the term used was not "Chairman" (on the precedent of similar institutions in countries whose languages have a chairman/president distinction, such as the USSR and East Germany), but rather "President", from the shared etymology with the Spanish "presidente".

In cases of the absence, illness or death of the President of the Council of State, a vice president assumes the President’s duties.

The president of Cuba has the power to:

Cuba has had a socialist political system since 1959 based on the "one state – one party" principle. Cuba is constitutionally defined as a Marxist–Leninist socialist state guided by the political ideas of Karl Marx, one of the fathers of historical materialism, Friedrich Engels and Vladimir Lenin. The present Constitution also ascribes the role of the Communist Party of Cuba to be the "leading force of society and of the state" and as such has the capability of setting national policy. The most recent leader was Raúl Castro, who held the title of First Secretary of the Communist Party of Cuba, the most powerful position in Cuba. As of 2019 Miguel Díaz-Canel is now the President of Cuba and is likely to succeed Raúl Castro as First Secretary in 2021.

The 2006–2008 Cuban transfer of presidential duties was the handover of the title of president and presidential duties from longtime Cuban leader Fidel Castro to his brother Raúl Castro, the next-in-line-of-succession person in Cuba, following Fidel's operation and recovery from an undisclosed digestive illness believed to be diverticulitis. Although Raúl Castro exercised the duties of president, Fidel Castro retained the title of President of Cuba, formally the President of the Council of State of Cuba, during this period.

Carlos Lage Dávila is a Cuban politician. Until 2009, he was a Vice President of the Council of State of Cuba, a member of the Politburo of the Communist Party of Cuba, and Executive Secretary of the Council of Ministers of Cuba. Lage was described as Cuba's de facto prime minister.

The Cuban Revolution was the overthrow of Fulgencio Batista's regime by the 26th of July Movement and the establishment of a new Cuban government led by Fidel Castro in 1959.

An indirect presidential election was held in Cuba on 24 February 2008, in which the National Assembly of People's Power elected a new President of Cuba and the members of the Council of State. The election followed the January 2008 parliamentary election. In the election, Raúl Castro, who had been Acting President since July 2006, was elected as President, succeeding his older brother, Fidel Castro. 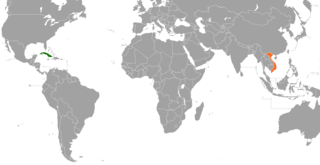 Cuban–Vietnamese relations are the interstate relations between the Republic of Cuba and the Socialist Republic of Vietnam. The relations are based on trade, credits, and investments which have increased significantly since the 1990s and on shared ideological beliefs – they are both socialist states. Diplomatic relations between the two countries were established in December 1960. Since then, Vietnam has become Cuba's second-largest trading partner in Asia, with Vietnam trailing behind China.

The following lists events that happened during 2016 in Cuba.

Parliamentary elections were held in Cuba on 11 March 2018 to elect members of the National Assembly of People's Power. Prior to the elections, President Raúl Castro declared he would not be seeking a new term, and a new President of the Council of State will be elected by the National Assembly. His deputy, Miguel Díaz-Canel, was subsequently elected as the new president. However, Castro remained the First Secretary of the Communist Party of Cuba, the most senior position in the country.

Salvador Valdés Mesa is a Cuban politician and former trade union leader. He is the First Vice President of Cuba since April 2018 and is a member of the Political Bureau of the Communist Party of Cuba.

A constitutional referendum was held in Cuba on 24 February 2019. Voters were asked whether they approved of a new constitution passed by the National Assembly of People's Power in July 2018. The reforms were approved, with 90.61% of valid votes cast in favour. The new Constitution came into force on 10 April 2019 after it was proclaimed in the Cuban National Assembly and published in the Official Gazette of the Republic.

First Lady of Cuba is de facto title of the spouse of the president of the Republic of Cuba.