The president of Greece, officially the President of the Hellenic Republic (Greek : Πρόεδρος της Ελληνικής Δημοκρατίας, romanized: Próedros tis Ellinikís Dimokratías), commonly referred to in Greek as the President of the Republic (Greek : Πρόεδρος της Δημοκρατίας, romanized: Próedros tis Dimokratías), is the head of state of Greece. The president is elected by the Hellenic Parliament; the role has been mainly ceremonial since the 1986 constitutional reform. The office was formally established by the Constitution of Greece in 1975, but has antecedents in the Second Hellenic Republic of 1924–1935 and the Greek junta in 1973–1974 which predated the transition to the current Third Hellenic Republic. The incumbent, since 13 March 2020, is Katerina Sakellaropoulou. [1]

The president is the nominal commander-in-chief of the Greek Armed Forces and occupies the first place in the country's order of precedence. Although the Greek Constitution of 1974 vested the presidency with considerable powers on paper, in practice presidents took a largely ceremonial role; the prime minister of Greece is the active chief executive of the Greek government and the country's leading political figure. The president's role was formally brought into line with practice by the 1986 constitutional amendment, which reduced the official powers.

According to Article 32 of the Greek Constitution, the president is elected for a five-year term by the Hellenic Parliament in a special session at least a month before the incumbent's term expires. Voting takes place in up to five ballots, separated by no more than five days. [2]

The first and second ballots require a supermajority of 200 out of the 300-person body, dropping to 180 on the third. The fourth ballot requires a simple majority of 151 votes. The fifth and last ballot is then contested between the two candidates with the most votes and decided by a relative majority. [2]

Before taking office, the president must recite an oath in front of the Parliament according to the Article 33, paragraph 2 of the Greek Constitution:

"I swear in the name of the Holy, Consubstantial and Indivisible Trinity to safeguard the Constitution and the laws, to ensure their faithful observance, to defend the national independence and territorial integrity of the Country, to protect the rights and liberties of the Greeks and to serve the general interest and the progress of the Greek People." [2]

The official residence of the president of Greece is the Presidential Mansion, formerly the New Royal Palace, in central Athens.

The current Third Hellenic Republic (Greek : Γʹ Ελληνική Δημοκρατία) was established in 1974 during the period of metapolitefsi , after the end of the Greek junta which had controlled Greece since the coup d'état of 21 April 1967.

On 1 June 1973 the then leader of the military junta and regent for the exiled King Constantine II, Georgios Papadopoulos, abolished the Greek monarchy and proclaimed himself President of the Republic. A staged referendum on 29 July 1973 confirmed the regime change, and passed a new constitution which established a presidential republic. This attempt at controlled democratization was ended by Brigadier Dimitrios Ioannidis' overthrow of Papadopoulos on 25 November 1973. The republic and its symbols (but not the semi-presidential system) were formally maintained, but they were nothing more than a façade for the military regime. Lt. General Phaedon Gizikis was appointed President of the Republic, but power was in the hands of Ioannidis, who ruled behind the scenes.

After the fall of the junta and the return to civilian rule under Konstantinos Karamanlis in August 1974, the constitutional acts of the military regime were deemed invalid, and a new referendum was held on 8 December 1974, which confirmed the abolition of the monarchy. In the interim, Gizikis, remained in office as President. After the plebiscite, he was succeeded by the first elected president, Michail Stasinopoulos.

A new constitution, promulgated on 11 June 1975, declared Greece a presidential parliamentary democracy (or republic – the Greek δημοκρατία can be translated both ways). This constitution, revised in 1985, 2001, 2008 and 2019, is still in force today.

Further information: List of heads of state of Greece 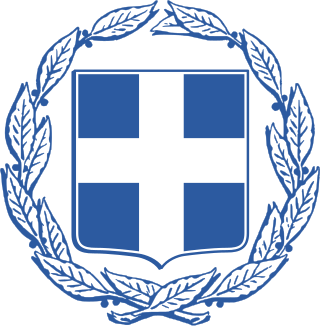 The Constitution of Greece was created by the Fifth Revisionary Parliament of the Hellenes in 1974, after the fall of the Greek military junta and the start of the Third Hellenic Republic. It came into force on 11 June 1975 and has been amended in 1986, 2001, 2008 and 2019.

Konstantinos G. Karamanlis, commonly anglicised to Constantine Karamanlis or just Caramanlis, was a four-time prime minister and two-term president of the Third Hellenic Republic, and a towering figure of Greek politics, whose political career spanned much of the latter half of the 20th century. 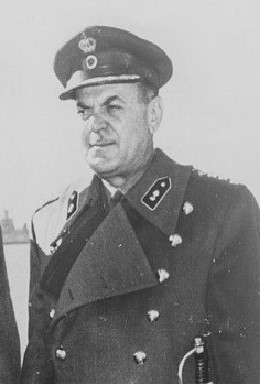 Geórgios Papadopoulos was a Greek military officer and political leader who ruled Greece as a military dictator from 1967 to 1973. He joined the Royal Hellenic Army during the Second World War and resisted the 1940 Italian invasion. Later on, he allegedly became an active Axis collaborator with the Security Battalions, although this claim has been disputed by historians. He remained in the army after the war and rose to the rank of colonel. In April 1967, Papadopoulos and a group of other mid-level army officers overthrew the democratic government and established a military junta that lasted until 1974. Assuming dictatorial powers, he led an authoritarian, anti-communist and ultranationalist regime which eventually ended the Greek monarchy and established a republic, with himself as president. In 1973, he was overthrown and arrested by his co-conspirator, Brigadier General Dimitrios Ioannidis. After the Metapolitefsi which restored democracy in 1974, Papadopoulos was tried for his part in the crimes of the junta and sentenced to death, but pardoned. Refusing several offers of clemency in exchange for admitting guilt for the crimes of the junta, he spent the remainder of his life in prison. 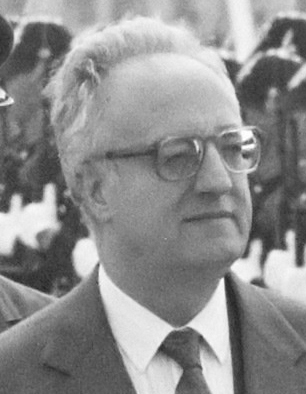 Christos Sartzetakis was a Greek jurist and a supreme justice of the Court of Cassation, who served as the President of Greece from 1985 to 1990. 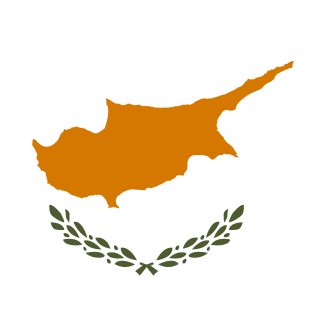 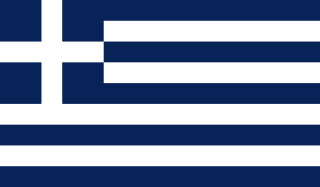 The Greek junta or Regime of the Colonels was a right-wing military dictatorship that ruled Greece from 1967 to 1974. On 21 April 1967, a group of colonels overthrew the caretaker government a month before scheduled elections which Georgios Papandreou's Centre Union was favoured to win. The dictatorship was characterised by right-wing cultural policies, anti-communism, restrictions on civil liberties, and the imprisonment, torture, and exile of political opponents. It was ruled by Georgios Papadopoulos from 1967 to 1973, but an attempt to renew its support in a 1973 referendum on the monarchy and gradual democratisation was ended by another coup by the hardliner Dimitrios Ioannidis, who ruled it until it fell on 24 July 1974 under the pressure of the Turkish invasion of Cyprus, leading to the Metapolitefsi to democracy and the establishment of the Third Hellenic Republic. 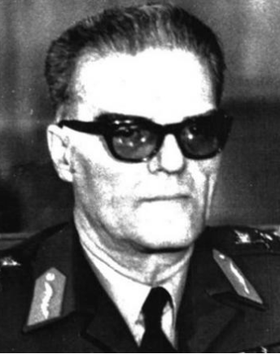 Phaedon Gizikis was a Greek army general, and the second and last President of Greece under the Junta, from 1973 to 1974.

The coat of arms of Greece or national seal of Greece comprises a white Greek cross on a blue escutcheon, surrounded by two laurel branches. It has been in use in its current form since 1975. Prior to the adoption of the current coat of arms, Greece used a number of different designs, some of which were not heraldic; the first heraldic design was introduced in 1832 and its main element, the blue shield with the white cross, has been the base for all other national coats of arms since then. The design is a heraldic representation of the Greek national flag adopted in 1822, which featured a white cross on a blue field.

Dimitrios Ioannidis, also known as Dimitris Ioannidis and as The Invisible Dictator, was a Greek military officer and one of the leading figures in the junta that ruled the country from 1967 to 1974. Ioannidis was considered a "purist and a moralist, a type of Greek Gaddafi".

The Metapolitefsi was a period in modern Greek history from the fall of the Ioaniddes military junta of 1973–74 to the transition period shortly after the 1974 legislative elections.

In the modern history of Greece, starting from the Greek War of Independence, the Constitution of 1975/1986/2001 is the last in a series of democratically adopted Constitutions. 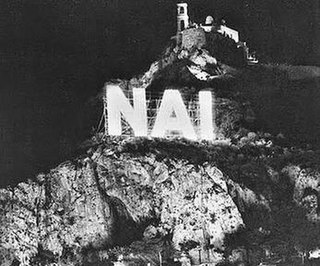 A constitutional referendum was held in Greece on 29 July 1973. The amendments would confirm the abolition of the monarchy by the military junta and establish a republic. The proposal was approved by 78.6% of voters with a turnout of 75%. 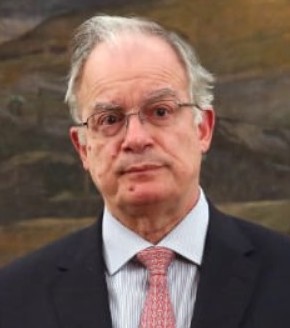 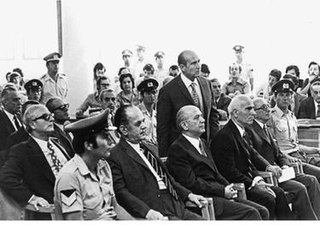 The Greek junta trials were the trials involving members of the military junta that ruled Greece from 21 April 1967 to 23 July 1974. These trials involved the instigators of the coup as well as other junta members of various ranks who took part in the events of the Athens Polytechnic uprising and in the torture of citizens.

Indirect presidential elections were held in Greece in December 2014 and February 2015 for the succession to Karolos Papoulias as President of the Hellenic Republic. The candidate of the ND–PASOK government, Stavros Dimas, failed to secure the required majority of MPs of the Hellenic Parliament in the first three rounds of voting in December. According to the provisions of the Constitution of Greece, a snap election was held on 25 January 2015, which was won by the left-wing Syriza party. Following the convening of the new Parliament, the presidential election resumed. On 18 February 2015, veteran ND politician Prokopis Pavlopoulos, backed by the Syriza-ANEL coalition government, was elected with 233 votes. 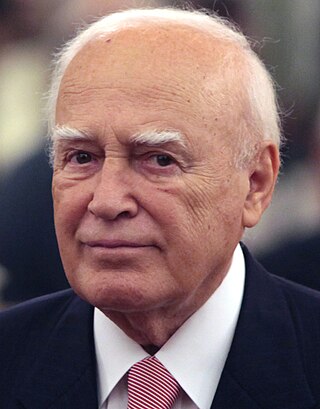 An indirect election for the position of President of the Hellenic Republic was held by the Hellenic Parliament on 8 February 2005.

The Vice President of Greece was a senior administrative official during the republican phase of the Regime of the Colonels in 1973.