The President of the Republic of Moldova (Romanian : Președintele Republicii Moldova) is the head of state of Moldova. The current president is Maia Sandu, who assumed office on 24 December 2020.

The office of the presidency in Moldova is largely ceremonial, with most of the formal political power exercised by parliament and the prime minister. [2] [3] However, because the president represents Moldova internationally, they have sway over the country's relationships with other countries. In addition, the president can influence public policy by using their high profile to initiate and participate in public discourse. [4]

A collection of organizational bodies collectively known as the Presidential Administration, whose members are appointed by the president, serves as the communication service between the government and the presidency. One office of the Administration, the Supreme Security Council, advises the president on foreign policy. [5]

The president is elected in a two-round direct election, with a runoff taking place between the top two finishers if no candidate receives a majority in the first round. This system was put in place when the constitution of Moldova was adopted in 1994.

In 2000, a law was passed changing the process to an indirect election by the Parliament of Moldova, with a supermajority of 61 votes required. On March 4, 2016, the Constitutional Court ruled that the law was unconstitutional [6] and Moldova consequently returned to electing the president via popular vote.

One presidential term lasts for four years; presidents are limited to two terms.

According to the Article 77 of the Constitution of Moldova (1994), the president of Moldova is the head of the state and represents the state and is the guarantor of national sovereignty, independence, and the unity and territorial integrity of the nation.

According to Article 91 of the Constitution of Moldova (1994):

According to Article 89 of the Constitution of Moldova (1994):

According to Article 90 of the Constitution of Moldova (1994):

The official march of the presidency is the Marș de Întîmpinare «La Mulți ani» (Slow March «To many years»), which is used during the arrival of the president at special occasions, similarly to Hail to the Chief for the President of the United States. [8] The Presidential Band of the Republic of Moldova is the main military band of the Armed Forces of the Republic of Moldova and specifically serves the president during all functions of state. The band performs at welcome ceremonies of foreign officials on state visits, military parades, and the accreditation of ambassadors. [9] [10]

Office of the President

Chairmen of the Presidium of the Supreme Soviet

Chairman of the Supreme Soviet

The Presidential Palace is located in the Buiucani sector of Chișinău. It was constructed between 1984 and 1987 to the design of architects A. Zalțman and V. Iavorski. The distinctive building was originally the meeting place of the Supreme Soviet of the Moldavian SSR.

The Party of Socialists of the Republic of Moldova is a democratic socialist political party in Moldova. A populist party, it holds Eurosceptic and Russophilian views, both of which are reflected by its long-time leader Igor Dodon. It is contrasted to like-minded centre-left European parties for its conservative views on social issues, reflecting the country's strong social conservatism and the influence of the Moldovan Orthodox Church.

The Commission for constitutional reform is a commission instituted in Moldova by acting President Mihai Ghimpu to adopt a new version of the Constitution of Moldova (1994).

Aureliu Ciocoi is a Moldovan diplomat who has served as Acting Prime Minister of Moldova between 2020 and 2021, as Minister of Foreign Affairs since 9 November 2020. He also served as foreign minister in 2019 and, prior to that, as the ambassador to Germany, Denmark, China, and the United States.

Igor Dodon is a Moldovan politician who previously served as the president of Moldova from 23 December 2016 to 24 December 2020. He currently serves as the leader of the Party of Socialists of the Republic of Moldova. He served as minister of trade and economics in the governments of Vasile Tarlev and Zinaida Greceanîi from September 2006 to September 2009 and was a member of the Parliament of Moldova from 2009 to 2016. He lost his bid for re-election in 2020 to Maia Sandu in a rematch whom he had defeated four years earlier in 2016. 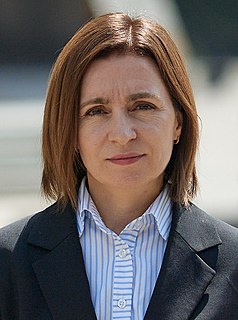 Maia Sandu is a Moldovan politician who has been the President of Moldova since 24 December 2020. She is the former leader of the Party of Action and Solidarity (PAS) and former Prime Minister of Moldova from 8 June 2019 until 14 November 2019. On 12 November 2019, Sandu's government collapsed after a vote of no-confidence, with 63 of the 101 MPs having voted on the motion submitted by the PSRM. Sandu was Minister of Education from 2012 to 2015 and member of the Parliament of Moldova from 2014 to 2015, and again in 2019. 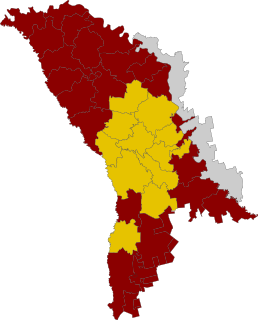 The Party of Action and Solidarity is a centre-right, liberal political party in Moldova. The PAS was founded by Maia Sandu, the former Minister of Education and the incumbent president of Moldova. A pro-European party, it is an observer of the European People's Party (EPP) and the International Democrat Union (IDU).

Presidential Palace is the official residence of the president of Moldova.

The Presidential Band of the Republic of Moldova is an artist collective and the senior most military band of the Armed Forces of the Republic of Moldova, specifically serving the President of Moldova in his/her position as commander in chief. The band plays at welcome ceremonies of foreign officials on state visits, ceremonies of national importance, military parades, the accreditation ceremonies for ambassadors to Moldova, and various community events. The current commander of the band is Lieutenant Colonel Leonid Vozniuc, who is the director of all the military bands in the armed forces. The band, which currently consists of 110 musicians, has performed in international festivals and military tattoos in Germany, Russia, Belgium and Romania.

Victor Gaiciuc is a Moldovan military general, who served as Moldovan Minister of Defense until August 2021. He was also the National Security Advisor to former president Igor Dodon. He is currently the chairman of the Union of Officers of Moldova and was also the secretary of the Supreme Security Council.

The Sandu Cabinet was a Cabinet of Moldova, led by Maia Sandu.

Snap parliamentary elections were held in Moldova on 11 July 2021. Following the resignation of Ion Chicu, the position of Prime Minister became vacant, with the Parliament being obligated to form a new government within three months. After the expiration of the constitutionally mandated period and two failed attempts to win parliamentary approval for the proposed cabinets, the Constitutional Court ruled on 15 April that the circumstances justifying a dissolution of the parliament were met. President Maia Sandu signed the decree dissolving the Parliament on 28 April and snap parliamentary elections were called on.

In mid-2019, a sequence of events following the 2019 Moldovan parliamentary election – and the subsequent attempts to form and install a new government, culminated in the positions of Prime Minister and Speaker of the Parliament, as well as the powers and duties of the President, being claimed by competing individuals.

Palace of the Republic is an official multi-purpose building as well as a concert and theatre hall in Moldova. It is located at the Buiucani sector in the commune of Condrița in Chișinău.

Ion Chicu is a Moldovan politician who served as Prime Minister of Moldova between 2019 until his resignation in 2020.

Presidential elections were held in Moldova on 1 November. The fourth direct elections since independence in 1991, voters had the possibility to either elect a new president or re-elect the incumbent Igor Dodon. Because no candidate received a majority of votes in the first round, a run-off between the top two candidates, Maia Sandu and Dodon, was held on 15 November. Maia Sandu won the second round with 57.72% of the vote, becoming the first female President of the country and the first winner from the Party of Action and Solidarity (PAS).

Presidential elections are scheduled to be held in Moldova in autumn 2024.

Wikimedia Commons has media related to Presidents of Moldova .
This page is based on this Wikipedia article
Text is available under the CC BY-SA 4.0 license; additional terms may apply.
Images, videos and audio are available under their respective licenses.