President's Office will be concerned with the following aspects of governance:-

The following institutions fall within the purview of the Secretary to the President;

Felix R. Dias Bandaranaike was a Sri Lankan lawyer and politician, who served as Cabinet Minister of Finance, Parliamentary Secretary for the Prime Minister and Defence and External Affairs (1960–1965) and Cabinet Minister of Justice (1970–77) in the cabinet of Prime Minister Sirima Bandaranaike. He was a very popular person about the anti-corruption campaign and also known as the "virtual leader of the state" during the SLFP governments after the death of Prime minister S.W.R.D. Bandaranaike. He was very active in defeating two major coups against the government, one is 1962 attempted military coup and JVP's 1971 JVP Insurrection.

The Prime Minister's Office is a ministry of the Government of Sri Lanka. It provides the administrative and institutional framework for the exercise of the duties and responsibilities vested in the Prime Minister of Sri Lanka. From 1947 to 1978 it was the most powerful office within the government. However, after the creation of the executive presidency in 1978 the post of Prime Minister became more or less nominal and functions as a deputy to the President, with a few exceptions. 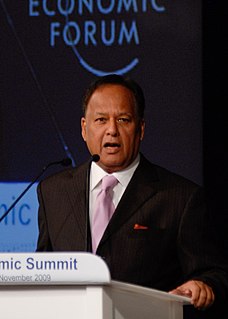 Sarath Leelananda Bandara Amunugama, MP, SLAS is a Sri Lankan politician and civil servant. He was the Cabinet Minister of Public Administration and Home Affairs and Deputy Minister of Finance and Planning until April 2010. He is a Member of Parliament from the Kandy District for the United People's Freedom Alliance in the Parliament of Sri Lanka.

The Ministry of Finance is a cabinet ministry of the Government of Sri Lanka responsible for developing and executing the government's public finance policy, economic policy and long term fiscal planning. The Treasury is housed at the General Treasury Building in Fort.

The Ministry of Highways, Ports and Shipping was a Sri Lankan government ministry responsible for the governance,implementation,creation and development of Ports including Colombo, Galle and Trincomalee ports, Highways including Southern expressway, Colombo Outer Circular expressway, Katunayake expressway and their transport services. It was reorganized as two separate ministries, the Ministry of Ports and Shipping and Ministry of Higher Education and Highways following the formation of the Sirisena cabinet in January 2015.

The Ministry of Information and Mass Media is a cabinet ministry of the Government of Sri Lanka responsible for the implementation of the Post Office Ordinance and the Stamp Ordinance of Sri Lanka. Aside from broader policy formulation, this also includes the maintenance and expansion of the Sri Lanka postal service, the design, release, sale and archiving of the country's postage stamps, representing Sri Lanka's interests at the Universal Postal Union, the oversight of banking, insurance and wire transfer services provided at postal offices.

Punchi Banda Jayasundara is a Sri Lankan economist and is currently the Secretary to the President, Gotabaya Rajapaksa. He was the former Permanent Secretary of the Treasury and Ministry of Finance on multiple occasions.

Kanapathipillai Cathiravelpillai Logeswaran is a Sri Lankan civil servant. He was the 10th Governor of North Western Province having assumed office on 12 April 2018.