Smith was born into a tenant farming family of thirteen children in Corn Hill, a town in Williamson County, Texas that has since been absorbed into nearby Jarrell. [1] [2] [3] The family later moved to Lamesa, Texas, where Smith graduated in 1928 from Lamesa High School. In 1934, he graduated from Texas Technological College (now Texas Tech University) in Lubbock with a bachelor's degree in business administration. [2] Staying in Lubbock, he founded a movie theater business and invested in real estate. [2] [4]

Smith was first elected to the Texas House of Representatives in 1944 and then to the Texas State Senate in 1956. He won the Senate seat by defeating in the primary the incumbent Kilmer B. Corbin, the father of actor Barry Corbin. In 1962, Smith won the lieutenant governor's race, securing majorities in all but 16 of the 254 counties to defeat the Republican O.W. "Bill" Hayes. [5]

In 1968, Smith was elected governor, a position he held for two two-year terms. He succeeded the popular Democratic Governor John B. Connally, Jr., who later switched to the Republican Party in 1973. To win the governorship, Smith first defeated Don Yarborough in the 1968 Democratic runoff election. Several other candidates, including Dolph Briscoe, a large landholder from Uvalde in the Texas Hill Country, and former Texas Attorney General Waggoner Carr, also of Lubbock, were eliminated in the primary.

Smith's inauguration on January 21, 1969, had what was called "the flavor of the South Plains." The Texas Tech University marching band led the parade just behind the marshal and the color guard. A mounted masked Red Raider rode with the band. Governor and Mrs. Smith, both Tech graduates, followed in an open convertible. Other Smith family members rode in the parade, followed by the new lieutenant governor, Ben Barnes. The band of Lamesa High School, Smith's alma mater, was the first among the high school groups. Before the oath taking, the first to be televised in Texas history, Smith had been feted with a $25-per-place victory dinner in the Austin Municipal Auditorium, now the Long Center for the Performing Arts. [6]

In 1971 and 1972, Smith was embroiled in the Sharpstown scandal stock fraud scheme, which eventually led to his downfall. Smith lost his third-term bid for the governorship of Texas to Dolph Briscoe of Uvalde in the Democratic primary in 1972. He ran a distant fourth in the primary, behind Briscoe, women's activist Frances "Sissy" Farenthold of Corpus Christi, and Lieutenant Governor Ben Barnes, formerly of Comanche County.

Among his appointments, Smith in 1970 named Paul Pressler of Houston, a former state representative, as judge of the Texas 133rd District Court in Harris County. Pressler, who later switched to the Republican Party, subsequently became known as a prime leader in the Southern Baptist Convention Conservative Resurgence which began in Houston in 1979. [8]

He appointed former State Senator Grady Hazlewood of Amarillo and Austin as a regent of Hazlewood's alma mater , West Texas A&M University in Canyon. [9] In 1969, Smith named state Representative Randy Pendleton of Andrews to head the Office of State and Federal Relations in Washington, D.C. [10]

In 1974, Smith joined banker Stanton Leon Koop (1937–2008), a native of Pampa, in forming the West Texas Savings Association in Lubbock. In 1986, Koop moved to Dallas, where he was affiliated with Great Western Mortgage Company, until his retirement in 1994.

In 1978, at the age of sixty-six, Smith again entered the Democratic gubernatorial primary against his intraparty rival, Governor Briscoe. Both Smith and Briscoe lost in the primary to former Texas Supreme Court Chief Justice John Hill, who in turn was narrowly defeated in the general election by Republican Bill Clements.

Toward the end of his life, Smith worked as a political liaison officer for Texas Tech University. After his death in Lubbock, the airport was renamed in 2004 in his memory as Lubbock Preston Smith International Airport.

Smith termed himself a "conservative Democrat"; although he was generally supportive of President Lyndon B. Johnson, he refused to support his party's nominees for president in 1980 and for governor in 1982. Instead of voting to reelect President Jimmy Carter and Mark White in the gubernatorial race, Smith cast his ballot for Ronald Reagan and Bill Clements, respectively. [2]

On October 18, 2003, Smith died at age 91 in the Texas Tech University Medical Center in Lubbock after being hospitalized for pneumonia. He is interred with his wife, the former Ima Mae Smith (1911–1998), at the Texas State Cemetery in Austin. [2] 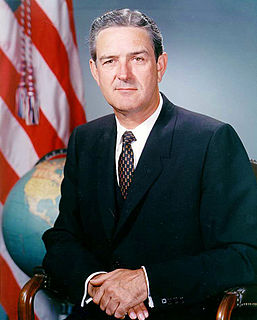 John Bowden Connally Jr. was an American politician. He served as the 39th Governor of Texas and as the 61st United States Secretary of the Treasury. He began his career as a Democrat and later became a Republican in 1973. 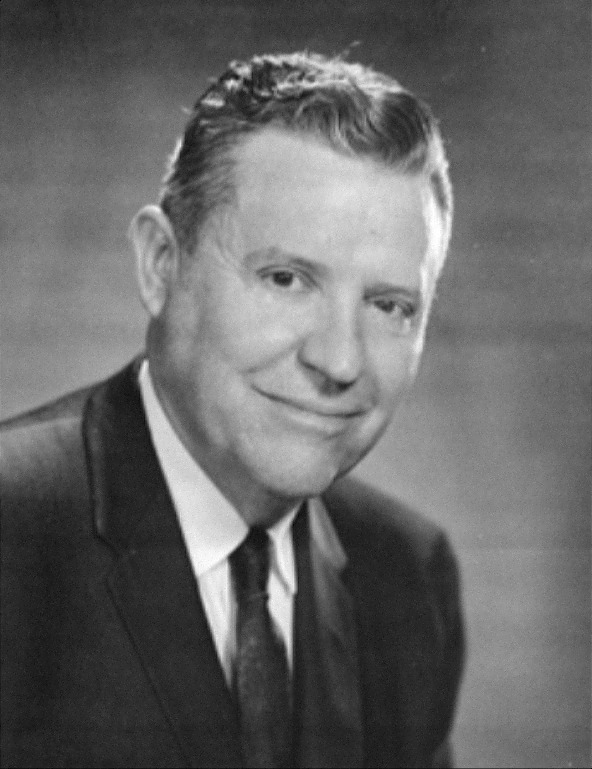 Ralph Webster Yarborough was a Texas Democratic politician who served in the United States Senate from 1957 to 1971 and was a leader of the progressive wing of his party. Along with Senate Majority Leader Lyndon B. Johnson and Speaker of the House Sam Rayburn, but unlike most Southern congressmen, Yarborough refused to support the 1956 Southern Manifesto, which called for resistance to the racial integration of schools and other public places. Yarborough voted in favor of the Civil Rights Acts of 1957, 1960, 1964, and 1968, as well as the 24th Amendment to the U.S. Constitution, the Voting Rights Act of 1965, and the confirmation of Thurgood Marshall to the U.S. Supreme Court. Along with Stuart Symington of Missouri and Mike Monroney of Oklahoma, Yarborough was one of only three Southern senators to vote for all five bills. 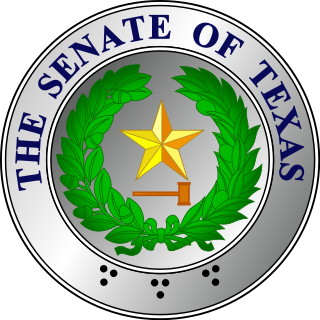 The Sharpstown scandal was a stock fraud scandal in the state of Texas in 1971 and 1972 involving the highest levels of the state government. The name came from the involvement of the Sharpstown area of Houston. 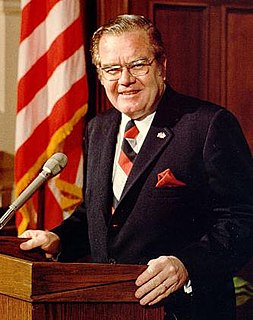 Dolph Briscoe Jr. was an American rancher and businessman who was the 41st Governor of Texas between 1973 and 1979. He was a member of the Democratic Party. 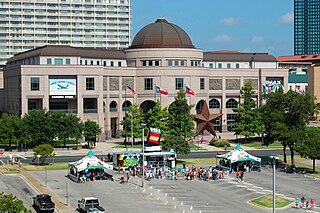 Robert Douglas Bullock, Sr., was a Democratic politician from Texas, whose career spanned four decades. His service culminated in his term as the 38th Lieutenant Governor of Texas from January 15, 1991 to January 19, 1999 during the term of Governor Ann Richards and the first term of Governor George W. Bush.

Henry Cushing Grover, usually known as Hank Grover, was a conservative politician from the U.S. state of Texas best known for his relatively narrow defeat as the Republican gubernatorial nominee in 1972.

James Harlan Granberry Sr. is an American politician who served as the mayor of Lubbock, Texas from 1970 to 1972. He guided the city through a series of tornadoes that shattered the region on May 11, 1970. He imposed a curfew to restore order. He had just become mayor when the tornadoes occurred. He served only one two-year term from 1970-1972. He was a member of the Lubbock City Council from 1966-1970. He did not seek a second two-year term in 1972 and was succeeded by city councilman Morris W. Turner. Mayors and council members in Texas are all officially nonpartisan, but Granberry was known to be a Republican. 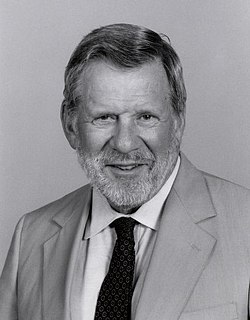 William Pettus Hobby Jr. is an American Democratic politician who served a record eighteen years as the 37th Lieutenant Governor of Texas. He held that office from January 16, 1973 to January 15, 1991 for an unprecedented five terms; he was the last lieutenant governor to serve a two-year term and the first elected to a four-year term when the Texas Constitution was amended to lengthen terms for statewide elected officeholders to four years beginning with the 1974 elections. The principal duty of the Texas lieutenant governor is to preside over the Texas State Senate.

Robert Lloyd Duncan is an American politician and the fourth chancellor of the Texas Tech University System, serving from 2014 to 2018. Duncan is a Republican, who has served in both houses of the Texas State Legislature.

John Luke Hill Jr. was a Texas lawyer, Democratic politician, and judge. He is the only person to have served as Secretary of State of Texas, Texas Attorney General, and Chief Justice of the Texas Supreme Court.

Jack M. Cox was an oil equipment executive from Houston who was the 1962 Republican gubernatorial nominee in the U.S. state of Texas.

Paul Walter Eggers was an Indiana native who was the Republican nominee for governor of Texas in both 1968 and 1970, when the state still had two-year gubernatorial terms. Eggers' races for governor were his only attempts at elected office. At the time, he was a largely unknown tax attorney in Wichita Falls in North Texas. 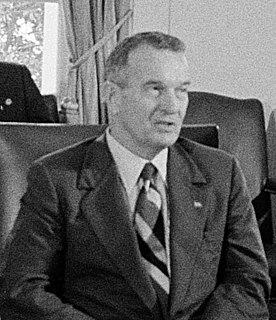 The 1978 Texas gubernatorial election was held on November 7, 1978 to elect the Governor of Texas. In a surprising upset, Republican Bill Clements was narrowly elected over Democrat State Attorney General John Luke Hill, winning 50% of the vote to Hill's 49%. In doing so, Clements became the first Republican to be elected governor since Reconstruction.

Charles Lee Perry is a Republican member of the Texas State Senate from West Texas District 28 which contains two cities, Lubbock and San Angelo, and 46 mostly rural counties. He won an outright majority in a special election for the seat held on September 9, 2014. The slot became open when Robert L. Duncan, another Republican, resigned to become the new chancellor of the Texas Tech University System.

The 1972 Texas gubernatorial election was held on November 7, 1972 to elect the Governor of Texas. Incumbent Democratic Governor Preston Smith was running for reelection, but was defeated in the Democratic primary by businessman Dolph Briscoe. Briscoe went on to win the election by a relatively small margin, winning 48% of the vote to Republican Henry Grover's 45%. Raza Unida candidate Ramsey Muniz won 6%.

James O'Quinn Reese, known as Jim Reese, was a businessman who served from 1968 to 1974 as the mayor of Odessa, Texas. From the 1960s to the 1980s, he was a figure in the development of the two-party system in West Texas. In 1978, he lost the Republican nomination to future U.S. President George W. Bush for Texas' 19th congressional district seat in the United States House of Representatives. Bush was then defeated in the 1978 general election by the then Democrat, later Republican, Kent Hance.

Ramiro Muñiz, known as Ramsey Muñiz, is an American political activist. Muñiz is a formerly incarcerated Hispanic American who ran for governor of Texas in 1972 and 1974, each time as the nominee of the Raza Unida Party. He lost both elections to the Democrat Dolph Briscoe, a wealthy banker and landowner from Uvalde, Texas. He is the first Hispanic whose name appeared on a Texas gubernatorial general election ballot.

Frederick Joseph Agnich, known as Fred Agnich, was a Minnesota-born geophysicist who served from 1971 to 1987 as a Republican member of the Texas House of Representatives. From 1972 to 1976, he was the Texas Republican National Committeeman.