Last updated September 28, 2022
Head of Government of France
For a list, see List of prime ministers of France.

Jean Castex resigned as Prime Minister on 16 May 2022, and President Emmanuel Macron appointed Élisabeth Borne, Minister of Labour, Employment and Integration, as his successor the same day. Her government, the first led by a woman since Édith Cresson in 1992, was announced four days later on 20 May. Cresson and Borne are the only women to serve as Prime Minister.

The prime minister is appointed by the president of France, who is theoretically free to pick whomever they please for the post. In practice, because the National Assembly does have the power to force the resignation of the government by adopting a motion of censure, the choice of prime minister must reflect the will of the majority in the National Assembly. Notably, immediately after the legislative election of 1986, President François Mitterrand had to appoint Jacques Chirac as prime minister although Chirac was a member of the Rally for the Republic and therefore a political opponent of Mitterrand. While Mitterrand's Socialist Party was the largest party in the National Assembly, it did not have an absolute majority. The RPR had an alliance with the Union for French Democracy, which gave them a majority. Such a situation, in which the president is forced to work with a prime minister who is a political opponent, is called a cohabitation.

While prime ministers are usually chosen from amongst the ranks of the National Assembly, on rare occasions the president has selected a non-officeholder because of their experience in bureaucracy or foreign service, or their success in business management—Dominique de Villepin, most notably, served as prime minister from 2005 to 2007 without ever having held elected office.

The prime minister can "engage the responsibility" of their government before the National Assembly. This process consists of placing a bill before the assembly, and either the assembly overthrows the government, or the bill is passed automatically (article 49). [2] In addition to ensuring that the government still has support in the house, some bills that might prove too controversial to pass through the normal assembly rules are able to be passed this way.

The prime minister may also submit a bill that has not been yet signed into law to the Constitutional Council (article 61). [2] Before they are allowed to dissolve the assembly, the president has to consult the prime minister and the presidents of both houses of Parliament (article 12). [2] They are, as the representative of the government, the only member of the government able to introduce legislation in Parliament.

Under the Third Republic, the French Constitutional Laws of 1875 titled the head of government as the "President of the Council of Ministers" (French : Président du Conseil des Ministres), though he was informally called "prime minister" or "premier" outside of France.

The president of the council was vested with similar formal powers to those of the prime minister of the United Kingdom. In practice, however, this proved insufficient to command the confidence of France's multi-party parliament. Most notably, the legislature had the power to force the entire cabinet out of office by a vote of censure. As a result, cabinets were often toppled twice a year, and there were long stretches where France was left with only a caretaker government. Under the circumstances, the president of the council was usually a fairly weak figure whose strength was more dependent on charisma than formal powers. Often, he was little more than primus inter pares, and was more the cabinet's chairman than its leader.

After several unsuccessful attempts to strengthen the role in the first half of the twentieth century, a semi-presidential system was introduced under the Fifth Republic. It was at this point that the post was formally named "Prime Minister" and took its present form. The 1958 Constitution includes several provisions intended to strengthen the prime minister's position, for instance by restricting the legislature's power to censure the government. As a result, a prime minister has only been censured once during the existence of the Fifth Republic, in 1962 when Georges Pompidou was toppled over objections to President Charles de Gaulle's effort to have the president popularly elected. However, at the ensuing 1962 French legislative election, de Gaulle's coalition won an increased majority, and Pompidou was reappointed prime minister.

Élisabeth Borne has served as Prime Minister since 16 May 2022.

Dominique Marie François René Galouzeau de Villepin is a French politician who served as Prime Minister of France from 31 May 2005 to 17 May 2007 under President Jacques Chirac. 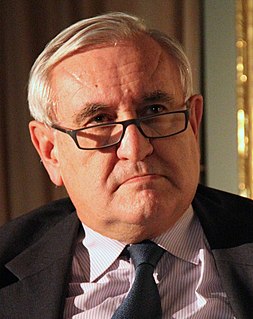 The order of precedence for public ceremonies in France is established by Décret n°89-655 du 13 septembre 1989 relatif aux cérémonies publiques, préséances, honneurs civils et militaires. The original order has been modified since 1989, for example inserting the Defender of Rights after that office's 2011 creation. As of 21 January 2021 the order is as follows:

The Union for French Democracy was a centre to centre-right political party in France. It was founded in 1978 as an electoral alliance to support President Valéry Giscard d'Estaing in order to counterbalance the Gaullist preponderance over the political right in France. This name was chosen due to the title of Giscard d'Estaing's 1976 book, Démocratie française. The party brought together Christian democrats, liberals and radicals, and non-Gaullist conservatives, and described itself as centrist. 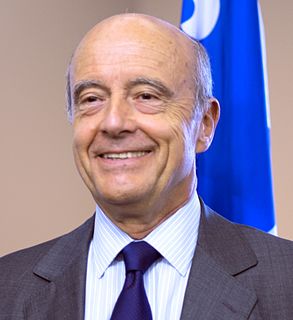 Alain Marie Juppé is a French politician. A member of The Republicans, he was Prime Minister of France from 1995 to 1997 under President Jacques Chirac, during which period he faced major strikes that paralysed the country and became very unpopular. He left office after the victory of the left in the snap 1997 legislative elections. He had previously served as Minister of Foreign Affairs from 1993 to 1995, and as Minister of the Budget and Spokesman for the Government from 1986 to 1988. He was president of the political party Union for a Popular Movement (UMP) from 2002 to 2004 and mayor of Bordeaux from 1995 to 2004. 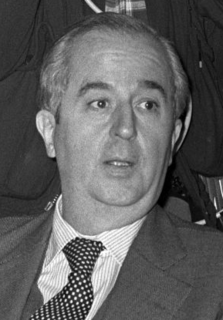 Édouard Balladur is a French politician who served as Prime Minister of France under François Mitterrand from 29 March 1993 to 17 May 1995. He unsuccessfully ran for president in the 1995 French presidential election, coming in third place.

Presidential elections were held in France on 23 April, with a second round on 7 May.

Cohabitation is a system of divided government that occurs in semi-presidential systems, such as France, whenever the president is from a different political party than the majority of the members of parliament. It occurs because such a system forces the president to name a premier who will be acceptable to the majority party within parliament. Thus, cohabitation occurs because of the duality of the executive: an independently elected president and a prime minister who must be acceptable both to the president and to the legislature.

Jean-Louis Debré is a former French judge and politician who served as President of the National Assembly from 2002 to 2007 and President of the Constitutional Council from 2007 to 2016. He was Minister of the Interior from 1995 until 1997 during the presidency of Jacques Chirac. Since 2016 he has been President of the Superior Council of Archives. 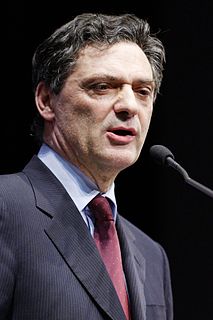 Patrick Devedjian was a French politician of the Union for a Popular Movement (UMP) party. A close adviser of Nicolas Sarkozy since the 1990s, he was Minister under the Prime Minister in charge of the Implementation of the Recovery Plan, a special ministerial post created for two years following the global financial crisis of 2008, a tenure which commenced in December 2008. He was of Armenian descent. In the night of 28 to 29 March 2020, he died of COVID-19 during the coronavirus pandemic.

French legislative elections took place on 21 and 28 March 1993 to elect the tenth National Assembly of the Fifth Republic. 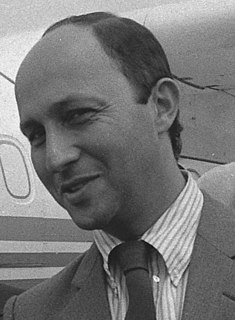 Catherine Colonna is a French diplomat and politician who has served as Minister of Europe and Foreign Affairs in the government of Prime Minister Élisabeth Borne since 20 May 2022.