Last updated August 28, 2022
Head of government of Greece
For a list, see List of prime ministers of Greece.

The prime minister of the Hellenic Republic (Greek : Πρωθυπουργός της Ελληνικής Δημοκρατίας, romanized: Prothypourgós tis Ellinikís Dimokratías), colloquially referred to as the prime minister of Greece (Greek : Πρωθυπουργός της Ελλάδας, romanized: Prothypourgós tis Elládas), is the head of government of the Hellenic Republic and the leader of the Greek Cabinet. The incumbent prime minister is Kyriakos Mitsotakis, who took office on 8 July 2019 from Alexis Tsipras.

The officeholder's official seat (but not residence) is the Maximos Mansion in the centre of Athens. The office is described in the Constitution either as Prime Minister or President of the Government (Πρόεδρος της Κυβερνήσεως). This is the reason why the prime minister is also addressed as "Mr/Madam President".

Election and appointment of the prime minister

The prime minister is officially appointed by the president of Greece.

According to Article 37 of the Greek Constitution, the president of the Hellenic Republic shall appoint the leader of the political party with the absolute majority of seats in the parliament as prime minister. If no party has the absolute majority, the president shall give the leader of the party with a relative majority (plurality) an exploratory mandate in order to ascertain the possibility of forming a government enjoying the confidence of parliament.

Therefore, the election of members of a certain party to parliament is the equivalent to a vote for that party's leader for prime minister. [3]

I swear in the name of the Holy, Consubstantial and Indivisible Trinity to safeguard the Constitution and the laws and to serve the general interest of the Greek People.

The archbishop then recites a few more blessings, and the participants make the sign of the cross three times. The archbishop then congratulates the new prime minister, who then shakes hands with the president before the pertinent documents are signed.

In 2015 Alexis Tsipras, a self-proclaimed atheist, became the first prime minister to opt for a secular affirmation instead of the traditional religious oath. He was sworn in by President Karolos Papoulias instead of the archbishop of Athens, and, in place of the above oath, recited [4] the affirmation:

Mr President, I would like to assure you, on my honour and conscience, that I will follow the Constitution and the laws and will always serve the general interest of the Greek People.

He then shook hands with the president, who congratulated him, before proceeding to sign the official documents as normal.

When Tsipras assumed the premiership again, on 21 September 2015, President Prokopis Pavlopoulos decided that the affirmation had to be more formal, as it follows:

I affirm, on my honour and conscience, that I will follow the Constitution and the laws and will serve the general interest of the Greek People.

Official seat of the prime minister

The Maximos Mansion (Greek: Μέγαρο Μαξίμου) has been the official seat of the prime minister of Greece since 1982. It is located in central Athens, near Syntagma Square. Although the building contains the offices of the head of the Greek Government, it is not used as the residence of the prime minister.

During the Greek War of Independence, different regions of Greece that were free of Ottoman control began establishing democratic systems for self-government, such as the Peloponnesian Senate. Meanwhile, a series of overarching National Assemblies, such as the First National Assembly at Epidaurus, met from time-to-time to provide overall coordination. The First Assembly elected a 5-member executive council, which was headed by Alexandros Mavrokordatos. [5]

The Executive continued to govern Greece until 1828, when Ioannis Kapodistrias assumed the governance of the state as "Governor of Greece"—simultaneously head of state and of the government. [5] Kapodistrias was assassinated in 1831 and his government, presided over by his brother Augustinos, collapsed the following year. It was replaced by a series of collective governmental councils, which lasted until 1833, when Greece became a monarchy.

In 1832, Greece's nascent experiment with democracy was ended and a monarchy was established with the underage Bavarian Prince Otto as king. Initially the government was led by a regency council made up of Bavarians. The president of this council, Count Josef Ludwig von Armansperg was the de facto head of government under Otto. Later Otto dismissed his Bavarian advisers and wielded power as an absolute monarch, effectively as head of state and his own head of government. [6]

King Otto's reign as an absolute monarch came to an end when agitators for a constitution (as had been promised when the monarchy was established) rose up in the 3 September Revolution in 1843. Otto was forced to grant a constitution and Andreas Metaxas took power; he is credited with being the first Greek to formally serve as "Prime Minister." [7]

Once the office of prime minister was established, the responsibility for self-government again fell to the Greek people. However, two factors maintained significant power for the crown: the Greek party structure was weak and client-based and the monarch was free to select any member of parliament to form a government. [6]

In 1862, Otto was finally deposed and the Greek people chose a new monarch in the person of King George I of Greece.[ citation needed ] In the next 15 years, the party structures began to evolve into more modern ideological parties with the Nationalist Party led by Alexandros Koumoundouros on the right and the more liberal New Party led by Charilaos Trikoupis. Trikoupis was successful after the election of 1874 in forcing the king to accept the "dedilomeni principle" (Greek : αρχή της δεδηλωμένης)--that the leader of the majority in parliament must be selected as prime minister by the king. [7]

The Nationalists were later led by Theodoros Deligiannis who famously said "was against everything Trikoupis was for." This two-party system existed until 1910, even as Georgios Theotokis took over the New Party after the death of Trikoupis in 1895 and the assassination of Deligiannis in 1905 which led to a splintering of parties on the conservative and nationalist side.

In 1910, military officers sparked the fall of civilian government when they issued the Goudi Pronunciamento. This event led to the arrival in Greece of the Cretan politician Eleftherios Venizelos. His followers gathered in the Liberal Party, which, despite Venizelos' dominant status, constituted the first true party in the modern sense, in that it was formed around a progressive, liberal and pro-republican political agenda.

The Liberal Party was eventually opposed by the more conservative and pro-royalist People's Party, initially led by Dimitrios Gounaris. The antagonism between the two parties, and the supporters of monarchy and republicanism, would dominate the political landscape until after the Second World War.

The history of modern Greece covers the history of Greece from the recognition of its autonomy from the Ottoman Empire by the Great Powers in 1828, after the Greek War of Independence, to the present day. 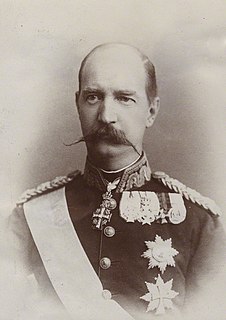 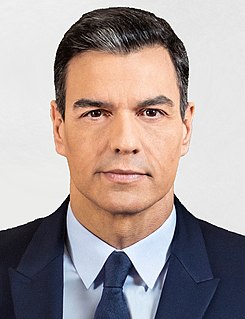 The prime minister of Spain, officially president of the Government is the head of government of Spain. The office was established in its current form by the Constitution of 1978 and it was first regulated in 1823 as a chairmanship of the extant Council of Ministers, although it is not possible to determine when it actually originated.

Antonis Samaras is a Greek politician who served as 14th Prime Minister of Greece from 2012 to 2015. A member of the New Democracy party, he was its president from 2009 until 2015. Samaras started his national political career as Minister of Finance in 1989; he served as Minister of Foreign Affairs from 1989 to 1992 and Minister of Culture in 2009.

Theodoros Deligiannis was a Greek politician, minister and member of the Greek Parliament, who served as Prime Minister of Greece five times from 1885 to 1905.

Charilaos Trikoupis was a Greek politician who served as a Prime Minister of Greece seven times from 1875 until 1895.

The New Party or the Modernist Party was a reformist Greek political party.

In the modern history of Greece, starting from the Greek War of Independence, the Constitution of 1975/1986/2001 is the last in a series of democratically adopted Constitutions.

Sotirios Sotiropoulos was a Greek economist and politician who briefly served as Prime Minister of Greece.

Konstantinos Konstantopoulos was a conservative Greek politician and briefly Prime Minister of Greece.

Nikolaos Petrou Deligiannis was the caretaker Prime Minister of Greece from January to June 1895. 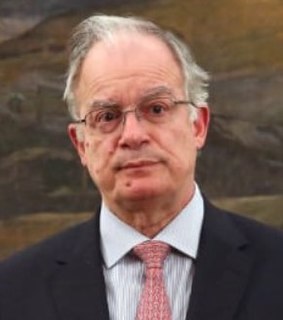 Alexis Tsipras is a Greek politician serving as Leader of the Official Opposition since 2019. He is a member of Syriza, a party over which he has presided since 2009 and has served as Prime Minister of Greece from 2015 to 2019.

Konstantinos Koumoundouros was an officer in the Hellenic Navy and Hellenic Army as well as a politician. 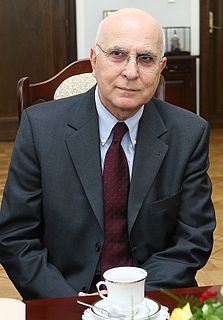 Indirect presidential elections were held in Greece in December 2014 and February 2015 for the succession to Karolos Papoulias as President of the Hellenic Republic. The candidate of the ND–PASOK government, Stavros Dimas, failed to secure the required majority of MPs of the Hellenic Parliament in the first three rounds of voting in December. According to the provisions of the Constitution of Greece, a snap election was held on 25 January 2015, which was won by the left-wing Syriza party. Following the convening of the new Parliament, the presidential election resumed. On 18 February 2015, veteran ND politician Prokopis Pavlopoulos, backed by the Syriza-ANEL coalition government, was elected with 233 votes. 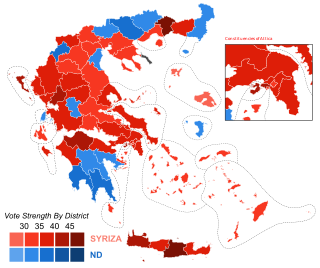 The order of precedence of Greece is fixed by the Decree 52749/2006 of the Minister of the Interior, and prescribes the protocollary hierarchy of the Greek political leadership. The President, as head of state, is first, and the Prime Minister, as head of government, is second.