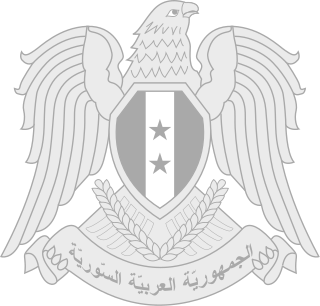 The president of Syria, officially the president of the Syrian Arab Republic, is the head of state of the Syrian Arab Republic. He is vested with sweeping powers that may be delegated, at his sole discretion, to his vice presidents. He appoints and dismisses the prime minister and other members of the Council of Ministers and military officers. Bashar al-Assad is the 20th and current president of Syria. Bashar is the son of former president, Hafez al-Assad, who was the longest-serving president serving 29 years. Bashar is currently the second longest-serving president marking the 21th year of his presidency in 2021 when he entered the post on 17 July 2000.

The prime minister of the Republic of Yemen is the head of government of Yemen.

Abdul Karim Abdullah Al-Arashi, was a Yemeni politician who served as the President of the Yemen Arab Republic briefly from 24 June to 18 July 1978. He was preceded by Ahmed Al-Ghashmi and succeeded by Ali Abdullah Saleh.

The Muslim Brotherhood of Syria, has been described as a branch of the Sunni Islamist Muslim Brotherhood, and as being very loosely affiliated to the Egyptian Muslim Brotherhood. In its most recent April 2012 manifesto, it "pledges to respect individual rights", to promote pluralism and democracy and does not mention Islam.

Muhammad Mustafa Mero was a Syrian politician who served as Prime Minister of Syria from 7 March 2000 to 10 September 2003.

The President of the United Arab Emirates, or the Raʾīs, is the head of state of the United Arab Emirates (UAE). The President and Vice-President are elected every five years by the Federal Supreme Council. Though the UAE Prime Minister is formally appointed by the President, every UAE Vice-President simultaneously serves as Prime Minister. Usually, a sheikh from the Emirate of Abu Dhabi holds the presidency, and a sheikh from the Emirate of Dubai the vice-presidency and premiership.

The Cabinet of Syria is the chief executive body of the Syrian Arab Republic.

Abd al-Qadir Qaddura was a Syrian politician who was a leading member of the Syria-based wing of the Ba'ath Party, in the era of President Hafez al-Assad. Qaddura served as speaker of the People's Council—the Syrian parliament—for much of the 1990s. He lost his post on the Ba'ath Party's leading board, the Regional Command, in 2005, as President Bashar al-Assad retired several main names from the Hafiz era.

The second Mustafa Mero government was the first Syrian government during the presidency of Bashar al-Assad. It was established on 13 December 2001 and lasted until 10 September 2003 when the President designated Muhammad Naji al-Otari to form a new government.

Omar Ibrahim Ghalawanji is a Syrian politician who was the caretaker Prime Minister of Syria in August 2012, following the defection of Riyad Farid Hijab.

The Muhammad Naji al-Otari government was the second Syrian government formed during the presidency of Bashar al-Assad. It was announced on 10 September 2003, by Prime Minister Muhammad Mustafa Mero. The cabinet lasted until 29 March 2011, and resigned in the wake of the Syrian Civil War.

The Supreme Political Council is a largely unrecognised executive body formed by the Houthi movement and the General People's Congress (GPC) to rule Yemen. Formed on 28 July 2016, the presidential council consists of 10 members and was headed by Saleh Ali al-Sammad as president until his death from a drone air strike on 19 April 2018 with Qassem Labozah as vice-president. Its territory that it rules consists of the former North Yemen, which united with South Yemen in 1990.

Astana Platform was created after several meetings in Nur-Sultan between members of the Syrian opposition forces. The platform is headed by the Syrian politician Randa Kassis.

Liwa Aqab al-Islami or the "Islamic Punishment Brigade" was an armed Syrian Salafi Jihadist rebel group based in northwestern Syria primarily in the Hama Governorate, held close ties to the Islamic State of Iraq and the Levant, including its leadership allegedly secretly pledging allegiance to ISIL, and carried out public executions and amputations, as well as enforcing Islamic law until it was forcibly dissolved by the al-Nusra Front in December 2014 due to its association with ISIL.

Ahmed Al-Qadri was a Syrian agricultural engineer and politician. He held the position of Minister of Agriculture and Agrarian Reform from February 2013 until August 2020 within the Council of Ministers, or cabinet, of Prime Ministers Wael Nader al-Halqi and Imad Khamis.

The Deputy Prime Minister of Syria is the deputy to the Prime Minister of Syria, who is head of the government of Syria, and a member of the Council of Ministers. The deputy prime minister is the second highest ranking member of the Council of Ministers. In the semi-presidential system of government, the prime minister is treated as the "first among equals" in the cabinet; the position of deputy prime minister is used to bring political stability and strength within a government or in times of national emergency, when a proper chain of command is necessary.