Last updated April 04, 2020
‹ The template Infobox noble is being considered for merging. ›

Born at Schloß Ehrenburg in Coburg, he was the youngest son of Duke Francis Josias, Duke of Saxe-Coburg-Saalfeld and Princess Anna Sophie of Schwarzburg-Rudolstadt. He was the great-uncle of King Leopold I of Belgium (1790–1865); and the great-great-uncle of Queen Victoria of the United Kingdom (1819–1901).

Josias joined the Habsburg military as Colonel in 1759, participated in the Seven Years' War, and rose to the rank of Lieutenant Field Marshal by 1773. In the Russo-Turkish-Austrian war of 1788, he commanded an army corps under Freiherr von Laudon, occupying Moldavia, capturing Khotyn in Bessarabia and sharing in Aleksandr Suvorov's victory in the Battle of Focșani (1 August 1789). Having completely beaten the main Ottoman army under Grand Vizier Koca Yusuf Pasha in the Battle of Rymnik, he captured the greater part of Wallachia, including Bucharest, being welcomed by the population after the flight of Prince Nicholas Mavrogenes (see History of Bucharest ), and soon after becoming a field marshal.[ citation needed ]

During the occupation of Moldavia, Josias met Therese Stroffeck, a commoner. On 24 September 1789, in the town of Roman, she bore him a son, named Frederick. Josias married Therese after their return to Coburg, on 24 December and recognized his son. Frederick was ennobled by the Austrian Emperor on 25 August 1808 and on 17 February 1853 the Duke Ernst II of Saxe-Coburg-Gotha created him Freiherr von Rohmann, named after the place of his birth. Frederick however, as the child of a morganatic marriage, and his descendants were barred of the succession of the duchy of Saxe-Coburg-Saalfeld.

In 1793 and 1794 he commanded the army in the Austrian Netherlands during the Flanders Campaign. Due to his victory in the French Revolutionary Wars at Neerwinden in March 1793, he returned the region to Austrian control. Entering France, he took Condé, Valenciennes, Quesnoy and Landrecies. However, due to unfortunate positioning, partly due to disunity amongst the Allied powers and their forces, he suffered a string of minor setbacks in front of the Revolutionary Army on the Sambre, followed by a decisive defeat at Fleurus (26 June 1794).

He thereupon abandoned the Netherlands, which Habsburg diplomats had already decided to give up. Angered by this, and openly criticizing the policies of the Baron Thugut, Josias resigned as Field Marshal (the Count of Clerfayt assumed command in his place) and retired to Coburg, where he later died. 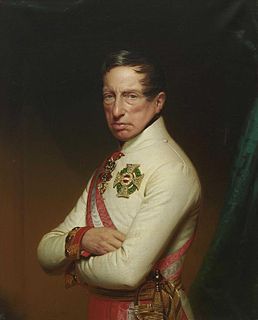 Archduke Charles Louis John Joseph Laurentius of Austria, Duke of Teschen was an Austrian field-marshal, the third son of Emperor Leopold II and his wife, Maria Luisa of Spain. He was also the younger brother of Francis II, Holy Roman Emperor. Despite being epileptic, Charles achieved respect both as a commander and as a reformer of the Austrian army. He was considered one of Napoleon's more formidable opponents. 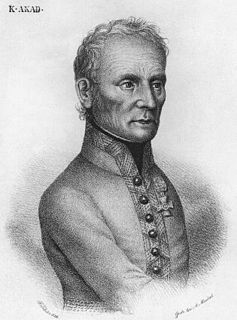 Karl Freiherr Mack von Leiberich was an Austrian soldier. He is best remembered as the commander of the Austrian forces that capitulated to Napoleon's Grande Armée in the Battle of Ulm in 1805. Mack makes a brief appearance as a character in book two of Volume I of Tolstoy's War and Peace. 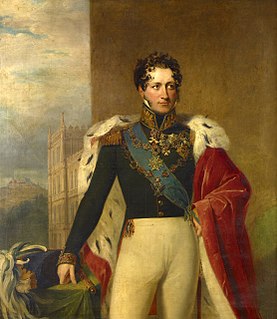 Ernest I was the last sovereign duke of Saxe-Coburg-Saalfeld and, from 1826, the first sovereign duke of Saxe-Coburg and Gotha. He was the father of Albert, Prince Consort, who was the husband of Queen Victoria. Ernest fought against Napoleon Bonaparte, and through construction projects and the establishment of a court theatre, he left a strong imprint on his residence town, Coburg.

Princess Charlotte Sophie of Saxe-Coburg-Saalfeld, Duchess in Saxony was a German duchess. 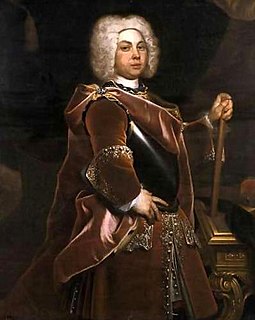 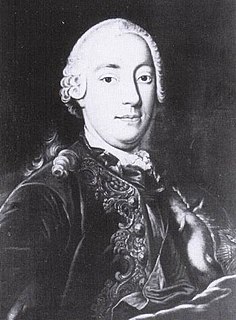 Francis, Duke of Saxe-Coburg-Saalfeld, was one of the ruling Thuringian dukes of the House of Wettin. As progenitor of a line of Coburg princes who, in the 19th and 20th centuries, ascended the thrones of several European realms, he is a patrilineal ancestor of, among others, Queen Elizabeth II of the United Kingdom, King Philippe of Belgium and King Simeon II of Bulgaria. 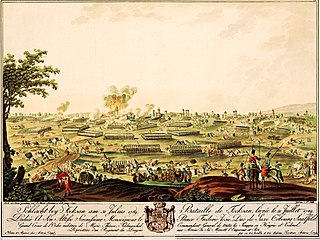 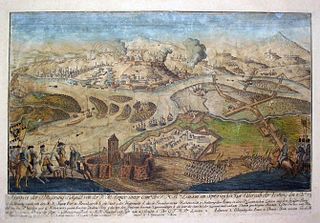 In the Siege of Belgrade a Habsburg Austrian army led by Feldmarschall Ernst Gideon von Laudon besieged an Ottoman Turkish force under Osman Pasha in the fortress of Belgrade. After a three-week leaguer, the Austrians forced the surrender of the fortress. During the campaign which was part of the Austro-Turkish War, the Austrian army was greatly hampered by illness. Austria held the city until 1791 when it handed Belgrade back to the Ottomans according to the terms of the peace treaty. Several Austrian soldiers who distinguished themselves during the siege later held important commands in the subsequent French Revolutionary Wars and Napoleonic Wars. Belgrade is the capital of modern Serbia.

The Battle of Lincelles was an action that took place as part of a larger manoeuvre on 17 August 1793 in the Flanders Campaign of the War of the First Coalition. It was fought between the forces of Revolutionary France under the command of Jean Baptiste Jourdan and Antoine Anne Lecourt de Béru, versus those of Great Britain under the Frederick Augustus, Duke of York and Albany and the Dutch Republic under the Hereditary Prince of Orange. The action resulted in a coalition victory.

Wilhelm Lothar Maria, Freiherr von Kerpen joined the army of Habsburg Austria and rose to the rank of general officer during the French Revolutionary Wars. He led a brigade under Prince Josias of Saxe-Coburg-Saalfeld during the War of the First Coalition. In the spring of 1796 he transferred to Italy where he commanded a brigade at the start of the Montenotte Campaign. Later that year he was ordered to help defend the County of Tyrol. After being promoted to Feldmarschall-Leutnant, he led a force against Barthélemy Catherine Joubert's French corps at Salorno, Klausen, and Brixen in March 1797. That year he became Proprietor (Inhaber) of Infantry Regiment Nr. 49, a position he held until his death.

Michael, Freiherr von Fröhlich was a German general officer serving in army of the Austro-Hungarian Empire, notably during the Wars of the French Revolution. 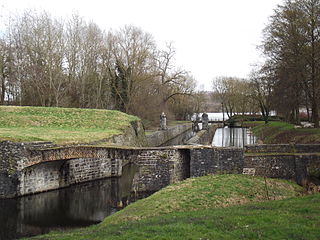 The Siege of Condé saw a force made up of Habsburg Austrians and French Royalists commanded by Duke Ferdinand Frederick Augustus of Württemberg lay siege to a Republican French garrison led by Jean Nestor de Chancel. After a blockade lasting about three months the French surrendered the fortress. The operation took place during the War of the First Coalition, part of a larger conflict known as the French Revolutionary Wars. Condé-sur-l'Escaut, France is located near the Belgium border about 14 kilometres (9 mi) northeast of Valenciennes.