Principles of the Constitution (1908)

The Principles of the Constitution of 1908 (simplified Chinese :钦定宪法大纲; traditional Chinese :欽定憲法大綱; pinyin :Qīndìng Xiànfǎ Dàgāng), also known as Outline of Imperial Constitution, [2] or Outline of the Constitution Compiled by Imperial Order, [3] was an attempt by the Qing dynasty of China to establish a constitutional monarchy at the beginning of the 20th century. It established a constitutional monarchy and confirmed some basic rights of citizens, while imposing some limitations on the power of the monarch. [4]

Since this outline of the constitution was not democratically formulated, but was promulgated in the name of the Guangxu Emperor by the Empress Dowager Cixi, it was called the "Outline of Imperial Constitution". [5]

Outline of Imperial Constitution was based on the "Constitution of the Empire of Japan", and consists of 23 articles, including the body text "Powers of the Monarch" (君上大权) and the appendix "Rights and Duties of Subjects" (臣民权利义务). [6]

Although the Outline of Imperial Constitution was modeled on the Japanese Meiji Constitution, [7] it is the first constitutional document in Chinese history. [8]

A constitutional monarchy is a form of monarchy in which the monarch exercises authority in accordance with a written or unwritten constitution. Constitutional monarchies differ from absolute monarchies in that they are bound to exercise powers and authorities within limits prescribed by an established legal framework. Constitutional monarchies range from countries such as Liechtenstein, Monaco, Morocco, Jordan, Kuwait and Bahrain, where the constitution grants substantial discretionary powers to the sovereign, to countries such as the United Kingdom, the Netherlands, Spain, Belgium, Sweden, Malaysia and Japan, where the monarch retains significantly less personal discretion in the exercise of their authority. 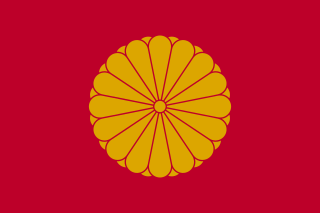 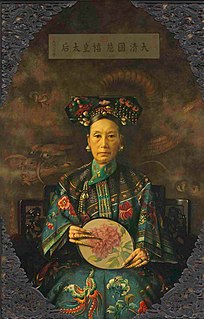 Empress Dowager Cixi (Chinese: 慈禧太后; pinyin: Cíxī Tàihòu ; Manchu: Tsysi taiheo;, of the Manchu Yehe Nara clan, was a Chinese empress dowager and regent who effectively controlled the Chinese government in the late Qing dynasty for 47 years, from 1861 until her death in 1908. Selected as a concubine of the Xianfeng Emperor in her adolescence, she gave birth to a son, Zaichun, in 1856. After the Xianfeng Emperor's death in 1861, the young boy became the Tongzhi Emperor, and she became the Empress Dowager. Cixi ousted a group of regents appointed by the late emperor and assumed regency, which she shared with Empress Dowager Ci'an. Cixi then consolidated control over the dynasty when she installed her nephew as the Guangxu Emperor at the death of the Tongzhi Emperor in 1875, contrary to the traditional rules of succession of the Qing dynasty that had ruled China since 1644.

The Hundred Days' Reform or Wuxu Reform was a failed 103-day national, cultural, political, and educational reform movement that occurred from 11 June to 22 September 1898 in late Qing dynasty China. It was undertaken by the young Guangxu Emperor and his reform-minded supporters. Following the issuing of the reformative edicts, a coup d'état was perpetrated by powerful conservative opponents led by Empress Dowager Cixi. 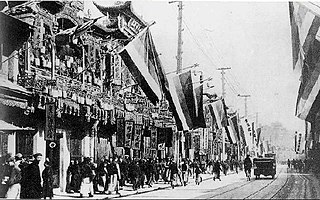 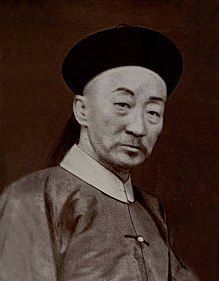 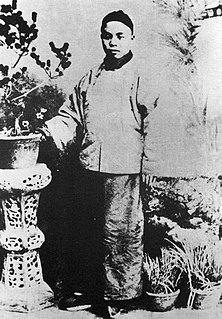 The United States Constitution has had influence internationally on later constitutions and legal thinking. Its influence appears in similarities of phrasing and borrowed passages in other constitutions, as well as in the principles of the rule of law, separation of powers and recognition of individual rights. The American experience of constitutional amendment and judicial review motivated constitutionalism at times when they were considering the possibilities for their nation's future. Examples include Abraham Lincoln during the American Civil War, his contemporary and ally Benito Juárez of Mexico, the second generation of 19th-century constitutional nationalists José Rizal of the Philippines and Sun Yat-sen of China, and the framers of the Australian constitution. However, democratizing countries often chose more centralized British or French models of government, particularly the Westminster system.

Late Qing reforms, commonly known as New Policies of the late Qing dynasty, or New Deal of the late Qing dynasty, simply referred to as New Policies, were a series of cultural, economic, educational, military, and political reforms implemented in the last decade of the Qing dynasty to keep the dynasty in power after the invasions of the great powers of the Eight Nation Alliance in league with the ten provinces of the Southeast Mutual Protection in the Boxer Uprising.

The Prime Minister of the Imperial Cabinet was the office of the Prime Minister created on 8 May 1911 in the late Qing dynasty, as part of the imperial government's unsuccessful attempts at creating a constitutional monarchy in China.

Jiang Shigong is a Chinese legal and political theorist, currently a professor at Peking University Law School, and a researcher on Hong Kong affairs. He is a "conservative socialist" exponent of Xi Jinping Thought and opposed to liberalism in China. Jiang previously worked at the Hong Kong Liaison Office from 2004 to 2008, and has advised the Chinese government on Hong Kong on subsequent occasions. Among his major ideas are his theory of the "absolute" or unwritten constitution of China embodied in the leadership of the Chinese Communist Party and his argument for the supremacy of the state as an "ethical entity" and the embodiment of the people's drive towards self-transformation. One of the main Chinese translators of Carl Schmitt, Jiang is a notable promoter of Schmitt's political theory in China.

The Imperial Edict of the Abdication of the Qing Emperor was an official decree issued by the Empress Dowager Longyu on behalf of the six-year-old Xuantong Emperor, who was the last emperor of the Qing dynasty, on 12 February 1912, as a response to the Xinhai Revolution. The revolution led to the self-declared independence of 13 southern Chinese provinces and the sequent peace negotiation between the rest of Imperial China with the collective of the southern provinces. The issuance of the Imperial Edict ended the Qing dynasty of China, which lasted 276 years, and the era of imperial rule in China, which lasted 2,132 years.