The studio has been involved in the creation of numerous anime television series, OVAs, theatrical films, and is further involved in video game design and development, as well as music publishing and management. Among its prominent works are Guilty Crown , Psycho-Pass , Eden of the East , Haikyu!! and the Ghost in the Shell series. It is known in the video game industry for developing intros, cut-scenes, and artwork for games such as Namco Tales Studio's Tales of Symphonia .

Initially founded as "I.G. Tatsunoko Limited" in 1987, it was a break-off branch-studio of Tatsunoko Productions which created Zillion . Mitsuhisa Ishikawa, the producer of Zillion, founded the studio to obstruct the dispersing of the excellent staffs of the Tatsunoko branch. [6] [7] [8] The members of the Tatsunoko Production annex, "" (named after the English "chime"), which led by Takayuki Goto joined the Ishikawa's Tatsunoko Branch that used the same floor of Goto's annex and Goto was also the character designer of Zillion. Kyoto Animation, one of the finishers of Zillion, supported Ishikawa and the "IG Tatsunoko Limited" was founded on December 15, 1987. The "IG" was named after the initials of Ishikawa and Goto. The initial shareholders of the studio were Ishikawa, Goto, Hideaki Hatta (Kyoto Animation), Tatsunoko Production, etc. Among Production I.G's earliest most notable works was the feature-length cinematic anime adaptation of the Patlabor story, created by the group Headgear. In 1993, during the final stages of the production of Patlabor 2 the company ended capital relation to Tatsunoko Production that had 20% of the stocks of I.G and changed its name to the current "Production I.G" on September 1993. Thus, the film Patlabor 2, released on August 1993, became the last product bearing the name "IG Tatsunoko".

In early 1997, fellow Tatsunoko employee Koichi Mashimo presented an idea of his to President Ishikawa. Mashimo had conceived the idea of a small studio that could work on small productions and "nurture" the creative spirit of its staff members. Ishikawa liked the idea and sponsored Mashimo's endeavor and studio Bee Train Animation Inc. was formed as a subsidiary company. [9] Production I.G and Ishikawa helped supervise and produce the early productions such as PoPoLoCrois Monogatari , Wild Arms: Twilight Venom , and Arc the Lad . Along with Xebec it was the second subsidiary company under I.G. In 2006, Bee Train became independent and Ishikawa stepped down as an executive in the company. [10] The two studios worked again in 2008 to work on Blade of the Immortal , Batman: Gotham Knight , and again in 2010 for Halo Legends . In 1998, the company incorporated to become "Production I.G, Inc." Following that, Production I.G merged with ING, another production company founded by the same Mitsuhisa Ishikawa, in 2000. In a Q&A session Ishikawa said: [11]

It [The I.G in Production I.G] stands for two words: itsumo (always) and genki (happy); you should ask, is that true? In reality, it stands for Ishikawa, and my artist collaborator's name, Takayuki Goto, the initials of our last names. But, now that I am the sole president, we kept the name. But I am happy to say it means Itsumo Genki.

On July 4, 2007, the company announced a merger with Mag Garden, forming a new holding company called IG Port. [12] IG Port has become the parent company of Production I.G, Signal.MD and Wit Studio. Xebec was formerly a part of IG Port until November 20, 2018, when it was sold to Sunrise. On January 12, 2018, it was announced that Xebec's subsidiary, Xebeczwei, was announced to have been given to I.G as a subsidiary studio, and that work on Fafner in the Azure: The Beyond would proceed as planned. The studio is planned to be renamed to IGzwei following the transfer. [13]

Production I.G is closer to several divisions working under the same name (such as with Sunrise) than it is to being a single studio. These different studios are known as different "sections" in reference to the studio's Ghost in the Shell franchise. Around 2011, Section 6 head George Wada and animation producer Tetsuya Nakatake approached Ishikawa with the intention of founding a new studio under Production I.G to allow for more creative freedoms and faster production processes than were available at I.G itself. On June 1, 2012, Wit Studio was founded, with the studio's first project being Attack on Titan , which I.G assisted in producing. [14] 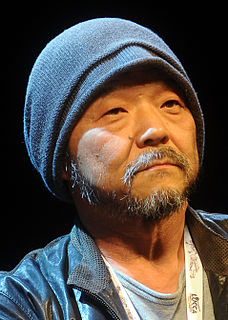 Mamoru Oshii is a Japanese filmmaker, television director and writer. Famous for his philosophy-oriented storytelling, Oshii has directed a number of acclaimed anime films, including Urusei Yatsura 2: Beautiful Dreamer (1984), Angel's Egg (1985), Patlabor 2: The Movie (1993), and Ghost in the Shell (1995). He also holds the distinction of having created the first ever OVA, Dallos (1983). As a writer, Oshii has worked as a screenwriter, and occasionally as a manga writer and novelist. His most notable works as a writer include the manga Kerberos Panzer Cop (1988–2000) and its feature film adaptation Jin-Roh: The Wolf Brigade (1999).

Ghost in the Shell 2: Innocence, known in Japan as just Innocence, is a 2004 Japanese animated cyberpunk film written and directed by Mamoru Oshii. The film serves as a standalone sequel to Oshii's 1995 film Ghost in the Shell and is loosely based on the manga by Masamune Shirow.

Appleseed is a Japanese manga series written and illustrated by Masamune Shirow. The series follows the adventures of ESWAT members Deunan Knute and Briareos Hecatonchires in Olympus. Like much of Shirow's work, Appleseed merges elements of the cyberpunk and mecha genres with politics, philosophy, and sociology. The series spans four volumes, released between 1985 and 1989. It has been adapted into an original video animation, three feature films, a 13-episode TV series, and two video games.

Tatsunoko Production Co., Ltd. and often shortened to Tatsunoko Pro, is a Japanese animation company. The studio's name has a double meaning in Japanese: "Tatsu's child" and "sea dragon", the inspiration for its seahorse logo. Tatsunoko's headquarters are in Musashino, Tokyo.

Immortal Grand Prix refers to two anime series co-produced by Cartoon Network and Production I.G. The first is a "microseries" consisting of five 5-minute episodes, and the second is a 26-episode animated series loosely related to the first. 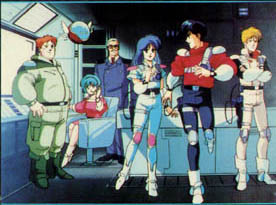 Xebec, Inc. was a Japanese animation studio based in Kokubunji, Tokyo, founded by former Tatsunoko Production animators on May 1, 1995. They have worked on many popular series such as Martian Successor Nadesico, Love Hina, Shaman King, To Love Ru, Yuuna and the Haunted Hot Springs, and Star Blazers: Space Battleship Yamato 2202.

Hiroyuki Okiura is a Japanese animation director and animator working for Production I.G.

Kōichi Mashimo is a Japanese anime director and the founder of the animation studio Bee Train. Since the creation of the studio, Mashimo directed or otherwise participated in a large number of the studio's works, for example, as a member of the art or sound department.

IG Port is a Japanese holding company that was established on December 1, 2007 as a result from a merger between the holding companies of Japanese anime studio Production I.G and manga publisher Mag Garden.

Mitsuhisa Ishikawa is a Japanese anime entrepreneur, the co-founder and current president and CEO of Production I.G, as well as a producer for the studio.

Ordet Co., Ltd. is a Japanese animation studio, founded in 2007 by ex-Kyoto Animation director Yutaka Yamamoto and other staff. The company’s name, “Ordet,” means “the word” in Danish, Swedish, and Norwegian. The company initially served as a subcontractor before producing their first fully solo work, an OVA episode of Black Rock Shooter, which aired in the spring of 2010. This was followed up with an 8-episode series that aired on noitamina from February 2, 2012 to March 22, 2012. In 2011, with studios Sanzigen and Trigger, Ordet joined the Ultra Super Pictures joint holding company.

Naoyoshi Shiotani is a Japanese director who was worked into multiple works from the studio Production I.G.. He is famous for directing all Psycho-Pass works. He was voted the third director in Newtype's anime awards.

Sola Digital Arts Inc. is a Japanese animation studio founded in 2009. The studio specializes in CGI.