Daniil Kharms was an early Soviet-era avant-gardist and absurdist poet, writer and dramatist.

Daniil is a Russian masculine given name, a version of Daniel.

OBERIU was a short-lived avant-garde collective of Russian Futurist writers, musicians, and artists in the 1920s and 1930s. The group coalesced in the context of the "intense centralization of Soviet Culture" and the decline of the avant garde culture of Leningrad, as "leftist" groups were becoming increasingly marginalized. 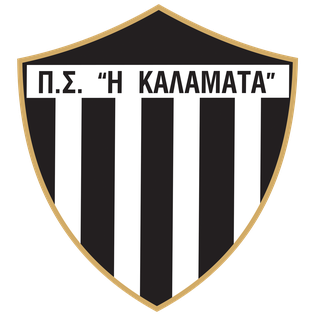 Kalamata Football Club is a professional football club based in Kalamata, Greece, currently competing in the Football League. 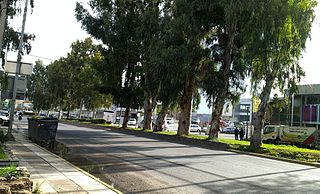 Votanikos is a neighborhood located 3 km west of the downtown part of the Greek capital of Athens. The area is named after a nearby botanical garden situated to the southwest. The eastern part are residential, the western part are forested and industrialized. The subdivision has no squares but has a nearby school. Major streets bordering this subdivision includes Patsi Street to the west, Athinon Avenue to the north, Konstantinopouleos Avenue and the rail to the south and Petrou Ralli Avenue to the south. The Iera Odos runs in the middle. The population is around 5,000–6,000 people and the area is about 0.5 km². Athens's first mosque will be in Votanikos district.

Natalia Sergeyevna Romaniuta is a Russian ice dancer. She is a two-time World Junior champion with Daniil Barantsev.

Daniil Sergeevich Barantsev is a Russian-American former competitive ice dancer. With partner and wife Jennifer Wester, he is the 2007 Nebelhorn Trophy champion. He is a two-time World Junior champion with earlier partner Natalia Romaniuta. 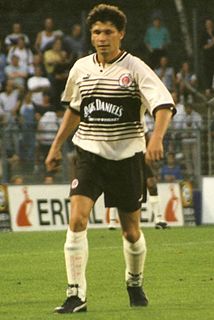 Yuri Nikolayevich Savichev is a former football striker. He is an identical twin brother of Nikolai Savichev and an uncle of Daniil Savichev.

Vassilis Daniil is a Greek football manager of national reputation. 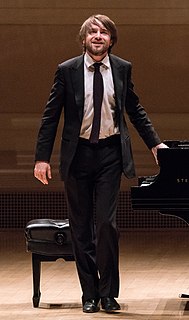 Daniil Olegovich Trifonov is a Russian pianist and composer. Described by The Globe and Mail as "arguably today's leading classical virtuoso" and by The Times as "without question the most astounding pianist of our age", Trifonov's honors include a Grammy Award win in 2018 and the Gramophone Classical Music Awards' Artist of the Year Award in 2016. The New York Times has noted that "few artists have burst onto the classical music scene in recent years with the incandescence" of Trifonov. He has performed as soloist with such orchestras as the New York Philharmonic, Cleveland Orchestra, Royal Philharmonic Orchestra, London Symphony Orchestra, Mariinsky Theatre Orchestra, Royal Concertgebouw Orchestra, Berlin Philharmonic, San Francisco Symphony, Houston Symphony and the Munich Philharmonic, and has given solo recitals in such venues as Royal Festival Hall, Carnegie Hall, John F. Kennedy Center for the Performing Arts, Berliner Philharmonie, Théâtre des Champs-Élysées, Concertgebouw, and the Seoul Arts Center.

Daniel Philippidis was a Greek scholar, figure of the modern Greek Enlightenment and member of the patriotic organization Filiki Etaireia. He was one of the most active scholars of the Greek diaspora in the Danubian Principalities and Western Europe. Philippidis mainly wrote geographical and historical works as well as translated important handbooks of science and philosophy.

Daniil Sergeyevich Medvedev is a Russian professional tennis player. Medvedev has a career-high ATP singles ranking of world No. 4, achieved on 9 September 2019. He has won seven ATP singles titles, including two Masters 1000 titles. 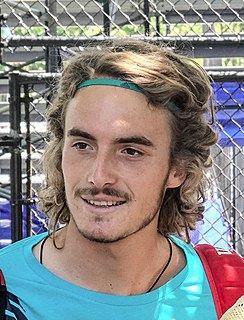 Stefanos Tsitsipas is a Greek professional tennis player. He is the youngest player ranked in the top 10 by the Association of Tennis Professionals (ATP) and has a career-high ranking of No. 5 in the world, making him the highest-ranked Greek player in history. Tsitsipas is the reigning champion at the ATP Finals, and is the youngest winner of the year-end championships in eighteen years. He has won four singles titles and reached nine finals on the ATP Tour.

Gilles Müller was the defending champion, but lost in the quarterfinals to Benoît Paire. 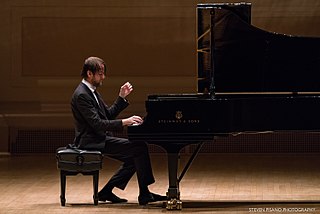 The recording career of Russian pianist and composer Daniil Trifonov initially focused on the music of Frédéric Chopin. His first three albums, recorded in 2010 and released in 2011, exclusively consisted of works of Chopin: the first album, Daniil Trifonov plays Frédéric Chopin, consisting of music performed live in recitals in Italy, was released by Decca Records in April; his second album, Chopin: Mazurki; Konzert, containing performances from the 16th Chopin International Piano Competition in Warsaw, was released in May; and finally, his third album, Chopin, a studio recording, was released in July. Trifonov's next album, Tchaikovsky: Piano Concerto No. 1, released in 2012, included a performance of Tchaikovsky's Piano Concerto No. 1 with the Mariinsky Theatre Orchestra conducted by Valery Gergiev.

The 2018 Rakuten Japan Open Tennis Championships was a men's tennis tournament played on indoor hard courts. It was the 45th edition of the Japan Open, and part of the 500 Series of the 2018 ATP World Tour. It was held at the Musashino Forest Sports Plaza in Tokyo, Japan, from October 1–7, 2018.

David Goffin was the defending champion, but withdrew before the competition began.

Daniil Medvedev was the defending champion, but withdrew before his first match.