Property of the Republic

Property of the Republic (Russian : Достоя́ние респу́блики, romanized: Dostoyanie respubliki) is a 1971 Soviet two-part adventure film directed by Vladimir Bychkov. Detective story takes place during the Civil War in Russia. The picture was the 44th most attended domestic film in the Soviet Union. [3]

Spring 1918. [4] Tarakanov, managing the estate of Prince Tikhvinsky, with the help of the former court fencing teacher Shilovsky and homeless boy Keshka, steals from abandoned mansion collection of paintings and sculptures. Hoping across the border, criminals roam the circus troupe, and they are being tailed by an employee of Criminal Investigation Makar Ovchinnikov.

Vladimir Bychkov's film watched 47.1 million viewers, which is 67 results in the history of Soviet film distribution. [7] 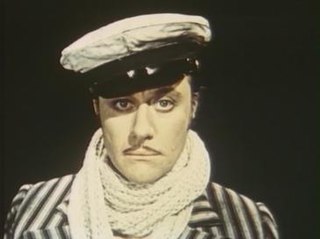 Andrei Alexandrovich Mironov was a Soviet and Russian theatre and film actor who played lead roles in some of the most popular Soviet films, such as The Diamond Arm, Beware of the Car and Twelve Chairs. Mironov was also a popular singer.

Defence of Sevastopol is a 1911 historical war film about the Siege of Sevastopol during the Crimean War and one of the most important films in the history of Russian cinema and cinema in general. It was the first feature film made in the Russian Empire and it premiered on 26 October at the Livadia Palace of Tsar Nicolas II. It was also the first film in the world recorded using two cameras. The film was also notable for using special "sound effects" and for using the actual war veterans as consultants.

Spartak Vasilyevich Mishulin was a Soviet actor and People's Artist of the RSFSR. He was best known for his roles as Sayid in White Sun of the Desert (1969) and the title character in the Soviet stage adaptation of the Swedish children's book series Karlsson-on-the-Roof (1971) at Moscow's famed Satire Theatre.

The Life of Klim Samgin is a 14-part TV film by director Viktor Titov, based on the novel by Maxim Gorky. The series premiered on television in March–April 1988.

The Conveyor of Death is a 1933 Soviet film directed by Ivan Pyryev.

The Goalkeeper is a 1936 Soviet sports-musical comedy film directed by Semyon Timoshenko. The screen version of novel by Lev Kassil Goalkeeper of the Republic, one of the first literary works about sport in the USSR.

The Train Goes East is a 1947 Soviet comedy film directed by Yuli Raizman.

The Anna Cross is a 1954 Soviet film directed by Isidor Annensky. Prize "Golden Olive Branch" at the International Film Festival in Italy, 1957 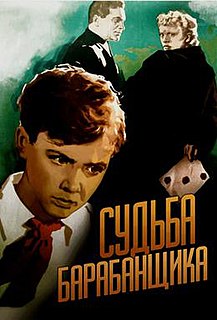 The Drummer's Fate is a 1955 Soviet drama film directed by Viktor Eisymont. It is based on the 1939 book of the same name by Arkady Gaidar.

Cruelty is a 1959 Soviet dramatic film directed by Vladimir Skuybin and written by Pavel Nilin.

The Captain's Daughter is a 1958 Soviet drama film directed by Vladimir Kaplunovskiy.

The City of Masters is a 1965 Soviet adventure film directed by Vladimir Bychkov.

Goal! Another Goal! is a 1968 Soviet comedy film directed by Viktor Sadovsky.

Rudin is a 1977 Soviet romance film directed by Konstantin Voinov.

Valentina is a 1981 Soviet drama film directed by Gleb Panfilov.

Vitya Glushakov - A Friend of the Apaches is a 1983 Soviet comedy film directed by Gerald Bezhanov.

The Initiated is a 1989 Soviet drama film directed by Oleg Teptsov.