Proteobacteria is a major phylum of Gram-negative bacteria. They include a wide variety of pathogenic genera, such as Escherichia , Salmonella , Vibrio , Helicobacter , Yersinia , Legionellales , and many others. [10] Others are free-living (nonparasitic) and include many of the bacteria responsible for nitrogen fixation.

Carl Woese established this grouping in 1987, calling it informally the "purple bacteria and their relatives". [11] Because of the great diversity of forms found in this group, it was named after Proteus, a Greek god of the sea capable of assuming many different shapes and is not named after the Proteobacteria genus Proteus . [1] [12]

All "Proteobacteria" are Gram-negative (though some may stain Gram-positive or Gram-variable in practice), with an outer membrane mainly composed of lipopolysaccharides. Many move about using flagella, but some are nonmotile or rely on bacterial gliding. The latter include the myxobacteria, an order of bacteria that can aggregate to form multicellular fruiting bodies. Also, a wide variety in the types of metabolism exists. Most members are facultatively or obligately anaerobic, chemolithoautotrophic, and heterotrophic, but numerous exceptions occur. A variety of genera, which are not closely related to each other, convert energy from light through photosynthesis and anoxygenic photosynthesis.

Some Alphaproteobacteria can grow at very low levels of nutrients and have unusual morphology such as stalks and buds. Others include agriculturally important bacteria capable of inducing nitrogen fixation in symbiosis with plants. The type order is the Caulobacterales, comprising stalk-forming bacteria such as Caulobacter . The mitochondria of eukaryotes are thought to be descendants of an alphaproteobacterium. [14]

The Betaproteobacteria are highly metabolically diverse and contain chemolithoautotrophs, photoautotrophs, and generalist heterotrophs. The type order is the Burkholderiales, comprising an enormous range of metabolic diversity, including opportunistic pathogens.

The Gammaproteobacteria are the largest class in terms of species with validly published names. The type order is the Pseudomonadales, which include the genera Pseudomonas and the nitrogen-fixing Azotobacter .

The Deltaproteobacteria include bacteria that are predators on other bacteria and are important contributors to the anaerobic side of the sulfur cycle. The type order is the Myxococcales, which includes organisms with self-organising abilities such as Myxococcus spp.

The Epsilonproteobacteria are often slender, Gram-negative rods that are helical or curved. The type order is the Campylobacterales, which includes important food pathogens such as Campylobacter spp.

The Zetaproteobacteria are iron-oxidizing neutrophilic chemolithoautotrophs, distributed worldwide in estuaries and marine habitats. The type order is the Mariprofundales.

The Oligoflexia are filamentous aerobes. The type order is the Oligoflexales, which contains the genus Oligoflexus .

The group is defined primarily in terms of ribosomal RNA (rRNA) sequences. The "Proteobacteria" are divided into nine classes with validly published names, referred to by the Greek letters alpha through zeta, the Acidithiobacillia, Hydrogenophilalia, and Oligoflexia. These were previously regarded as subclasses of the phylum, but they are now treated as classes. These classes are monophyletic. [15] [16] [17] The genus Acidithiobacillus , part of the Gammaproteobacteria until it was transferred to class Acidithiobacillia in 2013, [18] was previously regarded as paraphyletic to the Betaproteobacteria according to multigenome alignment studies. [19] In 2017, the Betaproteobacteria was subject to major revisions and the class Hydrogenophilalia was created to contain the order Hydrogenophilales [20]

Transformation, a process in which genetic material passes from bacterium to another, [22] has been reported in at least 30 species of "Proteobacteria" distributed in the classes alpha, beta, gamma and epsilon. [23] The best-studied "Proteobacteria" with respect to natural genetic transformation are the medically important human pathogens Neisseria gonorrhoeae (class beta), Haemophilus influenzae (class gamma) and Helicobacter pylori (class epsilon). [24] Natural genetic transformation is a sexual process involving DNA transfer from one bacterial cell to another through the intervening medium and the integration of the donor sequence into the recipient genome. In pathogenic "Proteobacteria", transformation appears to serve as a DNA repair process that protects the pathogen's DNA from attack by their host's phagocytic defenses that employ oxidative free radicals. [24]

The Nitrosomonadales are an order of the class Betaproteobacteria in the phylum "Proteobacteria". Like all members of their class, they are Gram-negative.

The Rhodocyclaceae are a family of gram-negative bacteria. They are given their own order in the beta subgroup of Proteobacteria, and include many genera previously assigned to the family Pseudomonadaceae.

The Rhodocyclales are an order of the class Betaproteobacteria in the phylum "Proteobacteria". Following a major reclassification of the class in 2017, the previously monofamilial order was split into three families:

The Hydrogenophilaceae are a family of the Hydrogenophilalia, with two genera – Hydrogenophilus and Tepidiphilus. Like all "Proteobacteria", they are Gram-negative. All known species are thermophilic, growing around 50 °C and using molecular hydrogen or organic molecules as their source of electrons to support growth - some species are autotrophs. 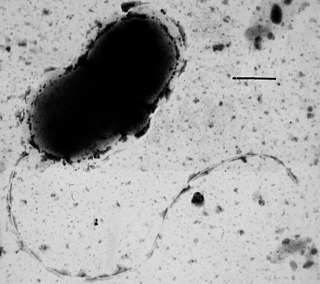 Desulfovibrionales are a taxonomic order of bacteria belonging to the Phylum of Proteobacteria, with four families. Like all Proteobacteria, they are Gram-negative. The majority are sulfate-reducing, with the exception of Lawsonia and Bilophila. All members of this order are obligately anaerobic. Most species are mesophilic, but some are moderate thermophiles.

Betaproteobacteria are a class of Gram-negative bacteria, and one of the eight classes of the phylum Proteobacteria. 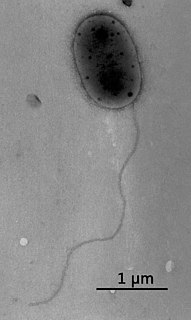 Devosia is a genus of Gram-negative soil bacteria. It is named after the Belgian microbiologist Paul De Vos. They are motile by flagella, the cells are rod-shaped.

Thauera is a genus of Gram-negative bacteria in the family Zoogloeaceae of the order Rhodocyclales of the Betaproteobacteria. The genus is named for the German microbiologist Rudolf Thauer. Most species of this genus are motile by flagella and are mostly rod-shaped. The species occur in wet soil and polluted freshwater.

Bergey's Manual of Systematic Bacteriology is the main resource for determining the identity of prokaryotic organisms, emphasizing bacterial species, using every characterizing aspect.

Spirillaceae is a family in the order Nitrosomonadales in the class Betaproteobacteria of the bacteria.

Dechloromonas is a genus in the phylum Proteobacteria (Bacteria).

Azoarcus is a genus of nitrogen-fixing bacteria. Species in this genus are usually found in contaminated water, as they are involved in the degradation of some contaminants, commonly inhabiting soil. These bacteria have also been found growing in the endophytic compartment of some rice species and other grasses. The genus is within the family Zoogloeaceae in the Rhodocyclales of the Betaproteobacteria.

Azonexus is a genus of gram-negative, non-spore-forming, highly motile bacteria that is the type genus of the family Azonexaceae which is in the order Rhodocyclales of the class Betaproteobacteria.

Azovibrio is a genus of bacteria from the order Rhodocyclales which belongs to the class of Betaproteobacteria, but the family to which it belongs is uncertain since it falls in between the Zoogloeaceae and the Rhodocyclaceae. Up to now there is only on species known.

Ferribacterium is a genus of bacteria from the family of Rhodocyclaceae which belongs to the class of Betaproteobacteria. Up to now there is only one species of this genus known.

Zoogloea, also known as zoöglœa, is a genus of gram-negative, aerobic, rod-shaped bacteria from the family of Zoogloeaceae in the Rhodocyclales of the class Betaproteobacteria.

The class Hydrogenophilalia in the Bacteria was circumscribed in 2017 when it was demonstrated that the order Hydrogenophilales was distinct from the Betaproteobacteria on the basis of physiology, biochemistry, fatty acid profiles, and phylogenetic analyses on the basis of the 16S rRNA gene and 53 ribosomal protein sequences concatenated using the rMLST platform for multilocus sequence typing.

The Hahellaceae are a family of Proteobacteria in the order of Oceanospirillales.