Last updated December 20, 2020
"Interface (object-oriented programming)" redirects here. It is not to be confused with Interface (computing).

Protocol is a term used by particular object-oriented programming languages with a variety of specific meanings, which other languages may term interface or trait .

Protocol when used otherwise is akin to a Communication protocol, indicating the chain of interactions between the caller and the object.

Languages which use the term Protocol include:

In these languages, a protocol is a common means for discrete objects to communicate with each other. These are definitions of methods and values which the objects agree upon, in order to co-operate, as part of an API.

The protocol/interface is a description of:

If the objects are fully encapsulated then the protocol will describe the only way in which objects may be accessed by other objects. For example, in Java interfaces , the Comparable interface specifies a method compareTo() which implementing classes must implement. This means that a separate sorting method, for example, can sort any object which implements the Comparable interface, without having to know anything about the inner nature of the class (except that two of these objects can be compared by means of compareTo()).

Although the Go programming language is not generally considered an object-oriented language, it does allow methods to be defined on user-defined types. Go has "interface" types that are compatible with any type that supports a given set of methods (the type does not need to explicitly implement the interface). The empty interface, interface{}, is compatible with all types.

Note that functional programming and distributed programming languages use the term protocol akin to the communications usage (i.e. a specification of allowed exchanges of messages, emphasis on exchanges, not on messages)[ citation needed ]. In particular, the following are also considered as part of a protocol in these languages:

Type classes in languages like Haskell are used for many of the things that protocols are used for.

In distributed computing, a remote procedure call (RPC) is when a computer program causes a procedure (subroutine) to execute in a different address space, which is coded as if it were a normal (local) procedure call, without the programmer explicitly coding the details for the remote interaction. That is, the programmer writes essentially the same code whether the subroutine is local to the executing program, or remote. This is a form of client–server interaction, typically implemented via a request–response message-passing system. In the object-oriented programming paradigm, RPCs are represented by remote method invocation (RMI). The RPC model implies a level of location transparency, namely that calling procedures are largely the same whether they are local or remote, but usually they are not identical, so local calls can be distinguished from remote calls. Remote calls are usually orders of magnitude slower and less reliable than local calls, so distinguishing them is important.

In software engineering, the mediator pattern defines an object that encapsulates how a set of objects interact. This pattern is considered to be a behavioral pattern due to the way it can alter the program's running behavior.

A method in object-oriented programming (OOP) is a procedure associated with a message and an object. An object consists of data and behavior; these comprise an interface, which specifies how the object may be utilized by any of its various consumers.

In computer science, reflection programming is the ability of a process to examine, introspect, and modify its own structure and behavior.

In computer science, dynamic dispatch is the process of selecting which implementation of a polymorphic operation to call at run time. It is commonly employed in, and considered a prime characteristic of, object-oriented programming (OOP) languages and systems.

Modular programming is a software design technique that emphasizes separating the functionality of a program into independent, interchangeable modules, such that each contains everything necessary to execute only one aspect of the desired functionality. 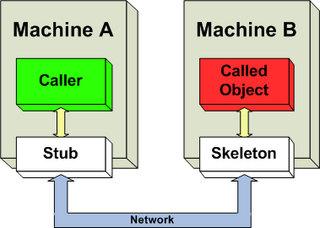 In distributed computing, distributed objects are objects that are distributed across different address spaces, either in different processes on the same computer, or even in multiple computers connected via a network, but which work together by sharing data and invoking methods. This often involves location transparency, where remote objects appear the same as local objects. The main method of distributed object communication is with remote method invocation, generally by message-passing: one object sends a message to another object in a remote machine or process to perform some task. The results are sent back to the calling object.

Object-oriented design is the process of planning a system of interacting objects for the purpose of solving a software problem. It is one approach to software design.

Logtalk is an object-oriented logic programming language that extends and leverages the Prolog language with a feature set suitable for programming in the large. It provides support for encapsulation and data hiding, separation of concerns and enhanced code reuse. Logtalk uses standard Prolog syntax with the addition of a few operators and directives.

The composition filters model denotes a modular extension to the conventional object model. It provides a solution for a wide range of problems in the construction of large and complex applications. Most notably, one implementation of composition filters provides an abstraction layer for message-passing systems.