The Protocol of Stockholm (also called Battle of Stockholm) was an agreement between the International Amateur Handball Federation (IAHF) and Fédération Internationale de Basketball (FIBB) to transfer the oversight of basketball from the IAHF to the FIBB.

In 1926 a commission was founded at the International Amateur Athletic Federation (IAAF) which was responsible for all ball games which were played by hand, including basketball and handball.

Representatives from 11 countries founded the International Amateur Handball Federation (IAHF) on 4 August 1928 in Amsterdam. [1] All ball games which are played by hand were under the umbrella of the IAHF. Basketball had its own technical commission.

At the 1932 Summer Olympics in Los Angeles neither basketball or handball were present. The IAHF wanted to add handball first, but the organisating committee didn't want handball included as it was not popular in the United States.

This impasse led Renato William Jones to found the Fédération Internationale de Basketball (FIB) in Geneva on the 18th June 1932. [2] In the same year they tried to become recognized by the IOC but because they had the same abbreviation FIB as the Federation Internationale de Boxe Amateur, and as the IAHF did not recognize the independence of the FIB the recognition was declined. [3] [4]

In early 1934 the Fédération Internationale de Basketball, now initialed FIBB, sent a request to the International Olympic Committee (IOC) that the FIBB be responsible for basketball. [5] At the 32nd IOC Sessions in Athens on 18 May 1934 the members of the IOC had positive feedback for the request but they decided to wait until the IAHF congress in Stockholm in September for a decision. [6]

In 1931 Franz-Paul Lang resigned as president of the IAHF and Karl Ritter von Halt became interim president. The main focus of the IAHF Congress in Stockholm in 1934 was to manage handball. Handball was first added to the 1936 Summer Olympics so they had to plan for the Olympics, and basketball was not a major part of the congress. The congress saw Karl Ritter von Halt elected as president and Avery Brundage (President of the United States Olympic Committee) as council member.

Secretary General Renato William Jones and president Giorgio di San Marzano of the FIBB were not invited. Nevertheless, they traveled to the congress. Secretary General of the IAHF Hassler didn't mind their presence. He offered them that basketball would be a demonstration sport at the 1936 Summer Olympics and further questions about the FIBB would be discussed by the IAHF technical commission in 1935.

It was a strange situation for Brundage because the USA were not part of the FIBB yet he had to stand up for the FIBB. The USA would only join the FIBB if the FIBB was recognized in Europe. Von Halt offered the FIBB that members of the FIBB would be part of the IAHF basketball commission. Brundage suggested that the FIBB council should have three IAHF and three FIBB members. Jones rejected this as he wanted an independent federation.

Jones said that "since you are together in Stockholm, the question should be decided immediately and suggests that 2 members from each federation meet after the congress". [7] This proposal was accepted. The IAHF named president Karl Ritter von Halt and Tadeusz Kuchar as their representatives and the negotiation was set for the next day. Secretary General Hassler had the last chance to talk against the recognition of the FIBB. He read out an opinion of France against the FIBB, but he could not stop the process.

On the same day as the protocol was signed Germany, Austria, Egypt, Estonia, Poland and the United States joined the FIBB.

Marcel Barille, president of the Fédération Française de Basketball (FFBB), was consternated that France had not helped with the treaty, but he congratulated Jones and di San Marzano. [9]

Confirmation by the IOC

At the 33rd IOC Sessions in Oslo on 28 February 1935 the Fédération Internationale de Basketball was recognized as the governing body for basketball. [10] [11]

Renato William Jones, also known as R. William, or simply William Jones, was a British basketball executive and popularizer of basketball in Europe and in Asia. He held an honorary doctorate from Springfield College.

A team representing Ireland has competed at the Summer Olympic Games since 1924, and at the Winter Olympic Games since 1992. The Olympic Federation of Ireland (OFI) was formed in 1922 during the provisional administration prior to the formal establishment of the Irish Free State. The OFI affiliated to the International Olympic Committee (IOC) in time for the Paris games. There has been controversy over whether the team represents the Republic of Ireland or the entire island of Ireland, which comprises both the Republic and Northern Ireland.

The Olympic Committee of Portugal is a non-profit organisation of public utility, which serves as the National Olympic Committee (NOC) for Portugal. It was founded on October 26, 1909, to ensure a timely, methodical and state-sponsored participation at the Games of the V Olympiad, in Stockholm. Thus, it was the 13th nation to join the Olympic Movement.

Daouda Karaboué is a French handball player, he won the gold medal at the 2008 Summer Olympics, the 2009 World Championships and the 2012 Summer Olympics.

The International Basketball Federation is an association of national organizations which governs the sport of basketball worldwide. Originally known as the Fédération Internationale de Basketball Amateur, in 1989 it dropped the word amateur from its name but retained the acronym; the "BA" now represents the first two letters of basketball. 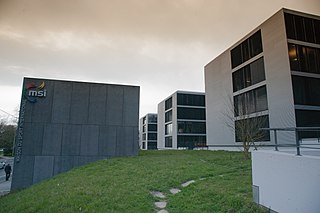 The Maison du Sport International is an office complex opened in 2006 in Lausanne, Switzerland, via a joint venture between the City of Lausanne, the Canton of Vaud and the International Olympic Committee (IOC). It was created to entice all the World's sports governing bodies to bring their headquarters to Lausanne, in order to improve their proximity to the headquarters of the IOC, and thus improve communications between these bodies.

The Belgian Olympic and Interfederal Committee, abbreviated to BOIC or COIB, is the National Olympic Committee for Belgium. The administrative seat is located in Brussels.

France competed at the 2012 Summer Olympics in London, between 27 July and 12 August 2012. French athletes have competed in every Summer Olympic Games of the modern era. The French Olympic Committee sent a total of 330 athletes to the Games, 183 men and 147 women, to compete in 24 sports.

This article contains lists of achievements in major senior-level international indoor handball, beach handball and field handball tournaments according to first-place, second-place and third-place results obtained by teams representing different nations. The objective is not to create combined medal tables; the focus is on listing the best positions achieved by teams in major international tournaments, ranking the nations according to the most podiums accomplished by teams of these nations.

The International Amateur Handball Federation (IAHF) was the administrative and controlling body for handball and field handball. IAHF was responsible for the organisation of handball's major international tournaments, notably the World Men's Handball Championship, which commenced in 1938, and the World Men's Outdoor Handball Championship, which commenced in 1938.

The 2026 Summer Youth Olympics, officially known as the IV Summer Youth Olympic Games, and commonly known as Dakar 2026 will be the fourth edition of the Summer Youth Olympics, an international sports, education and cultural festival for teenagers, in a city designated by the International Olympic Committee (IOC). It was originally planned to be held in Dakar, Senegal for 18 days from 22 October to 9 November 2022, becoming the first IOC event to be held in Africa and the first in a Muslim-Majority Country. However, on 17 July 2020 the IOC and Senegal agreed to postpone the games to 2026 due to the operational and economical consequences of the postponement of the 2020 Summer Olympics to 2021 due to the COVID-19 pandemic.