Granada is a province of southern Spain, in the eastern part of the autonomous community of Andalusia. It is bordered by the provinces of Albacete, Murcia, Almería, Jaén, Córdoba, Málaga, and the Mediterranean Sea (along the Costa Tropical). Its capital city is also called Granada.

The river Genil, which rises in Granada, is one of the main tributaries of the Guadalquivir. Other important rivers include the Fardes, Monachil, Guadalfeo, Dílar, Ízbor, Verde and Darro.

The northern part of the province, comprising the districts of Baza and Huescar is known as the Granada Altiplano

The Alhambra World Heritage Site, Granada's biggest tourist attraction, showcases one of the very finest architectural legacies of Moorish rule in Spain, which in Granada lasted from 711 until 1492.

There are Roman Catholic cathedrals at Granada and Guadix.

The coast of Granada province is known as the Costa Tropical. It attracts large numbers of both Spanish and foreign holiday-makers. The main resorts are Almuñecar, Salobreña and La Herradura. The city of Granada brings in tourists from all over the world thanks to its Moorish architecture and famous Alhambra palace. In the winter the mountains of the Sierra Nevada play host to Europe's most southerly ski resort. Hiking and eco-tourism also attract a number of visitors to areas such as the Alpujarras and Lecrin Valley.

Puleva: founded in Granada in 1910, the company has been a subsidiary of the Lactalis group since 2001. It produces a wide range of dairy products, including milk and milkshakes, cream and products for infants. Puleva Biotech S.A. developed the first infant formula to contain nucleotides, and was a pioneer in the use of Omega-3 fatty acids in infant food products. [3]

Coviran: supermarket chain which operates on a franchise basis, specialising in small, neighbourhood shops. It has 2,501 supermarkets across the whole of Spain. [4]

The University of Granada is one of the largest universities in Spain, with approximately 56,000 students. [5] Each year the city also attracts over 10,000 foreign students, including over 2,000 European students through the Erasmus programme. As well as providing employment to a large number of people, the university also boosts the local economy by creating demand for rental property. The money spent by students also helps to support shops, restaurants, bars and other services in the city. In recent years the university has also been working to capitalise on the research it does through commercial ventures.

Primary industries such as agriculture and fishing play an important role in the local economy. There was previously also a very large construction sector, but as of 2011 it was experiencing a deep downturn. The Granada Health Science Technological Park has created some high-skilled jobs in the biotechnology sector. 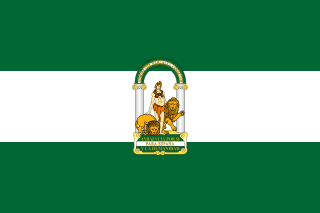 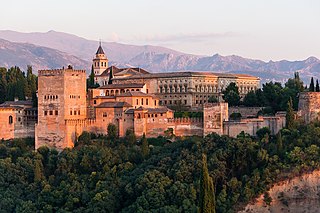 The Alhambra is a palace and fortress complex located in Granada, Andalusia, Spain. It was originally constructed as a small fortress in AD 889 on the remains of Roman fortifications, and then largely ignored until its ruins were renovated and rebuilt in the mid-13th century by the Nasrid emir Mohammed ben Al-Ahmar of the Emirate of Granada, who built its current palace and walls. It was converted into a royal palace in 1333 by Yusuf I, Sultan of Granada. After the conclusion of the Christian Reconquista in 1492, the site became the Royal Court of Ferdinand and Isabella, and the palaces were partially altered in the Renaissance style. In 1526 Charles I & V commissioned a new Renaissance palace better befitting the Holy Roman Emperor in the revolutionary Mannerist style influenced by humanist philosophy in direct juxtaposition with the Nasrid Andalusian architecture, but it was ultimately never completed due to Morisco rebellions in Granada. 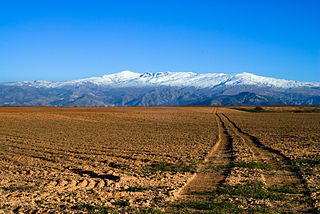 Sierra Nevada is a mountain range in the region of Andalucia, in the province of Granada and, a little further, Málaga and Almería in Spain. It contains the highest point of continental Spain: Mulhacén, at 3,479 metres (11,414 ft) above sea level.

Abu `Abdallah Muhammad XII, known in Europe as Boabdil, was the 22nd and last Nasrid ruler of the Emirate of Granada in Iberia.

The Baetic System is one of the main systems of mountain ranges in Spain. Located in the southern and eastern Iberian Peninsula, it is also known as the Cordilleras Béticas or Baetic Mountains. The name of the mountain system derives from the ancient Roman region of Baetica, one of the Imperial Roman provinces of ancient Hispania. 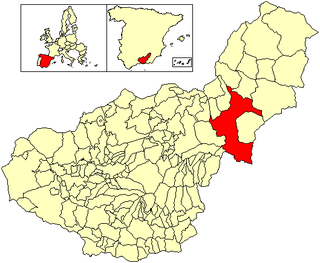 Baza is a town in the province of Granada in Andalusia, twice a former Catholic bishopric and now a Latin Catholic titular see as Basti.

Purchena is a small town in Andalusia, southern Spain. It is situated inland the county of Almería, at the foot of the Sierra de los Filabres, in the middle of the Almanzora River Valley, surrounded by woods which ascend towards the mountains, an environment which contrasts with the rest of the municipalities of the area which are set in much more arid surroundings.

An alcazaba, alcáçova or alcassaba is a Moorish fortification in Spain and Portugal. The word derives from the Arabic word al-qasbah (القصبة), a walled-fortification in a city.

Illar is a municipality of Almería province, in the autonomous community of Andalusia, Spain.

The Penibaetic System is the southernmost of the three systems of mountain ranges of the Baetic System in the southern Iberian Peninsula. It includes the highest point in the peninsula, 3,478 m high Mulhacén in the Sierra Nevada.

Beas de Granada is a town located in the province of Granada, Andalusia, southern Spain. As of 2009, the town had a population of 1050 inhabitants. The settlement is at a height of 1072 meters above sea level and therefore has good views of the sierra Nevada. It is within the Parque Natural de la Sierra de Huetor.

Güéjar Sierra is a village and municipality located in the province of Granada, Spain. According to the INE, it had a population of 2,988 at the start of 2010. The village is situated in the north-western part of the Sierra Nevada mountain range, at an altitude of 1,088 metres. The municipality borders Pinos Genil, Dúdar, Quéntar, La Peza, Lugros, Jérez del Marquesado, Trevélez, Capileira and Monachil. Its boundary with Trevélez and Capileira runs along the highest ridge of the Sierra Nevada, and over Mulhacén, making these the three highest municipalities in peninsular Spain. The Genil and Maitena rivers rise in Güéjar.

Rubite is a municipality located in the province of Granada, Spain. According to the 2004 census (INE), the village had a population of 492 inhabitants. Rubite is a locality and Spanish municipality situated at the east central of the region "La Costa Granadina" in the province of Granada, independent community of Andalusia. On the shores of the Mediterranean Sea, Rubite is bordered by the municipalities of Lújar, Órgiva and Polopos. 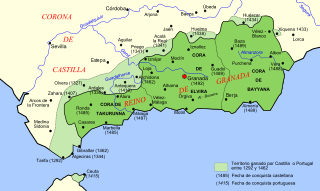 The Emirate of Granada, also known as the Nasrid Kingdom of Granada, was an emirate established in 1230 by Muhammad ibn al-Ahmar. After Prince Idris left Iberia to take the Almohad Caliphate leadership, the ambitious Ibn al-Ahmar established the last Muslim dynasty on the Iberian peninsula, the Nasrids. The Nasrid emirs were responsible for building part of the Alhambra palace complex. By 1250, the Emirate was the last part of the Iberian peninsula held by the Muslims. It roughly corresponded to the modern Spanish provinces of Granada, Almería, and Málaga. Andalusian Arabic was the mother tongue of the majority of the population. For two more centuries, the region enjoyed considerable cultural and economic prosperity.

The Mancomunidad de Municipios Marquesado del Zenete or Mancomunidad del Marquesado del Zenete is a voluntary grouping (mancomunidad) of municipalities, located in the province of Granada, autonomous community of Andalusia, Spain. They take their name from the Marquisate of Cenete, the former seigneury in this area, which in turn takes its name from the Arabic sened, meaning the slope that constitutes one side of a mountain range. That refers to the north slope of the Sierra Nevada, where the municipalities are located.

Sierra de Baza is a mountain range near the city of Baza in the Granada province in Spain. It is named after the town of Baza and its highest point is the 2,269 m high Calar de Santa Bárbara.

The Battle of Los Alporchones was a battle of the Spanish Reconquista that took place on 17 March 1452. The battle was fought between the troops of the Emirate of Granada and the combined forces of the Kingdom of Castile and its client kingdom, the Kingdom of Murcia. The Moorish army was commanded by Malik ibn al-Abbas and the Castilian troops were commanded by Alonso Fajardo el Bravo, the head of the House of Fajardo and the Alcalde of Lorca Castle. The battle was fought in the area around the city of Lorca and resulted in a victory for the Kingdom of Castile.