Public holidays in Japan (国民の祝日, kokumin no shukujitsu) were established by the Public Holiday Law (国民の祝日に関する法律, Kokumin no Shukujitsu ni Kansuru Hōritsu, lit. "An Act on public holidays"; Act No. 178 of 1948) of 1948 (as amended). A provision of the law establishes that when a national holiday falls on a Sunday, the next working day shall become a public holiday, known as furikae kyūjitsu (振替休日, "compensatory public holiday", literally "substitute holiday"). Additionally, any day that falls between two other national holidays shall also become a holiday, known as kokumin no kyūjitsu (国民の休日, literally "citizens' holiday"). May 4, sandwiched between Constitution Memorial Day on May 3 and Children's Day on May 5, was an annual example of such a holiday until it was replaced by Greenery Day in 2007.

Prior to Japan's adoption of the Gregorian calendar in 1873, the dates of holidays were based on the traditional Chinese lunisolar calendar. Thus, New Year's Day, for example, was celebrated at the beginning of spring, as it is in modern China, Korea, and Vietnam. Japan has 16 national, government-recognized holidays. [1]

Events of imperial mourning and celebration

In addition to the annual holidays listed above, certain events of celebration or mourning related to the imperial family are also treated as national holidays in the year in which they occur.

There have been six instances of such holidays since the introduction of the Public Holiday Law:

Beginning in 2000, Japan implemented the Happy Monday System, which moved a number of national holidays to Monday in order to obtain a long weekend.

In 2006, the country added Shōwa Day, a new national holiday, in place of Greenery Day on April 29, and to move Greenery Day to May 4. These changes took effect in 2007.

In 2014, the House of Councillors decided to add Mountain Day (山の日, Yama no Hi) to the Japanese calendar on August 11, after lobbying by the Japanese Alpine Club. It is intended to coincide with the Bon Festival vacation time, giving Japanese people an opportunity to appreciate Japan's mountains. [9] [10]

With the Japanese imperial transition, the Emperor's Birthday was moved from December 23 to February 23 (the respective birthdays of Emperor Emeritus Akihito and Emperor Naruhito). Due to Akihito's 2019 birthday being after his abdication but Naruhito's before his accession, this holiday was not celebrated in 2019.

As special arrangement for the 2020 Summer Olympics, the 2020 dates for Marine Day, Sports Day, and Mountain Day were moved to July 23, July 24, and August 10 respectively. With the Olympics and Paralympics postponed until 2021 due to the COVID-19 pandemic, the government left this change in place for 2020 and passed an amendment to the Olympic and Paralympic Special Measures Act to make a corresponding change to the holidays in 2021, moving them to July 22, July 23, and August 9 respectively. [8] [7] 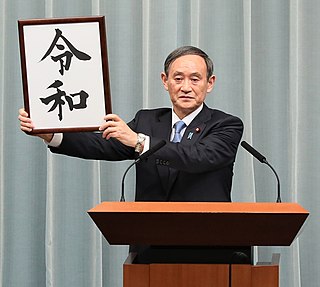 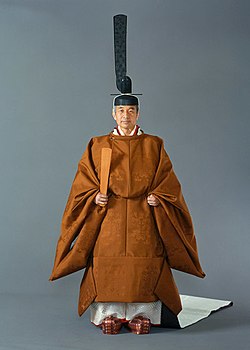 The Heisei era is the period of Japanese history corresponding to the reign of Emperor Akihito from 8 January 1989 until his abdication on 30 April 2019. The Heisei era started on 8 January 1989, the day after the death of the Emperor Hirohito, when his son, Akihito, acceded to the throne as the 125th Emperor. In accordance with Japanese customs, Hirohito was posthumously renamed "Emperor Shōwa" on 31 January 1989. Heisei translates to "peace everywhere".

Naruhito is the emperor of Japan. He acceded to the Chrysanthemum Throne on 1 May 2019, beginning the Reiwa era, following the abdication of his father, Akihito. He is the 126th monarch according to Japan's traditional order of succession.

The present observation of Greenery Day as a national holiday in Japan stems from the celebration of the birthday of the Emperor Shōwa on April 29 every year during the Shōwa era (1926-1989). In 1989, following the ascension of the Emperor Akihito to the Chrysanthemum Throne, the name of the holiday was changed from "Birthday of the Emperor" to "Greenery Day". Officially, as its name suggests, it is a day to commune with nature and to be thankful for blessings. The day was renamed to "Greenery Day" to acknowledge the controversial wartime emperor's love for plants without directly mentioning his name. However, in practice it is seen as just another day that expands the Japanese Golden Week vacation. 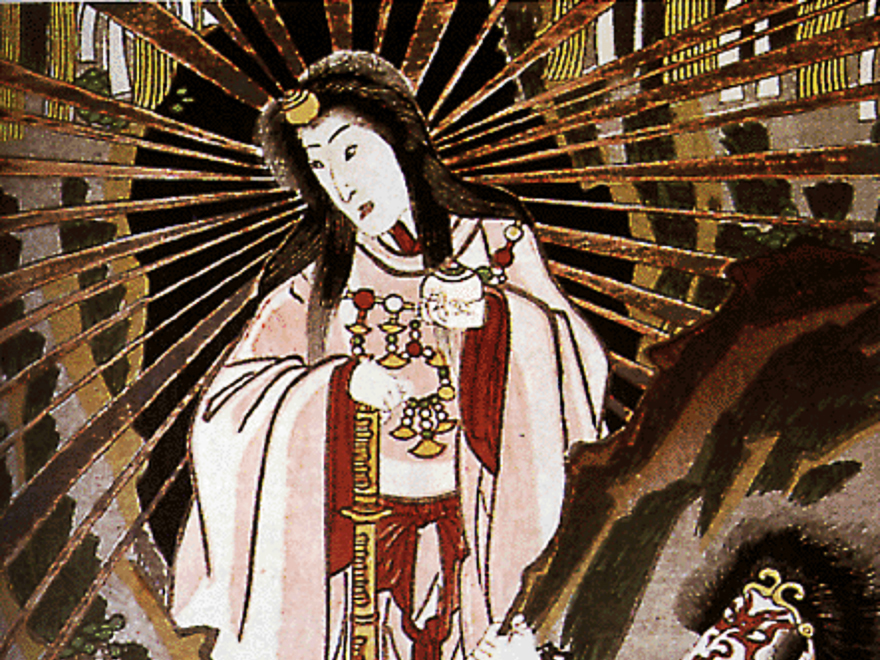 The Three Sacred Treasures are the Imperial Regalia of Japan and consist of the sword Kusanagi no Tsurugi (草薙劍), the mirror Yata no Kagami (八咫鏡), and the jewel Yasakani no Magatama (八尺瓊勾玉). They represent the three primary virtues: valor, wisdom, and benevolence.

Shōwa Day is a Japanese annual holiday held on April 29. It honors the birthday of Emperor Shōwa (Hirohito), the reigning emperor from 1926 to 1989. Shō (昭) means “shining” or “bright”, and wa (和) means “peace”, signifying the "enlightened peace" that citizens receive. According to the now defunct Democratic Party of Japan, the purpose of the holiday is to encourage public reflection on the turbulent 63 years of Hirohito's reign.

Labor Thanksgiving Day is an annual national holiday in Japan celebrated on November 23 of each year, unless that day falls on a Sunday, in which case the holiday is moved to Monday. The law establishing the holiday cites it as an occasion to respect labor, to celebrate production, and citizens give each other thanks.

Sports Day, formerly Health and Sports Day, is a national holiday in Japan held annually on the second Monday in October. It commemorates the opening of the 1964 Summer Olympics held in Tokyo, and exists to promote sports and an active lifestyle.

The Happy Monday System is a set of modifications to Japanese law in 1998 and 2001 to move a number of public holidays in Japan to Mondays, creating three-day weekends for those with five-day work weeks. It is the Japanese equivalent of the 1969 Uniform Monday Holiday Act in the United States.

Reigning Emperor or Majesty, according to protocol, is the honorific title used in Japan to refer to the current Emperor of Japan instead of using their personal name, as is done in the West. The only context where the personal name is used is when referring to their time before taking the throne.

Akihito is a member of the Imperial House of Japan who reigned as the 125th emperor of Japan, according to the traditional order of succession, from 7 January 1989 until 30 April 2019, Heisei era. He succeeded to the Chrysanthemum Throne upon the death of his father, Emperor Showa (Hirohito). Upon his abdication due to his age and declining health, he became Emperor emeritus. He was succeeded by his eldest son, Naruhito. 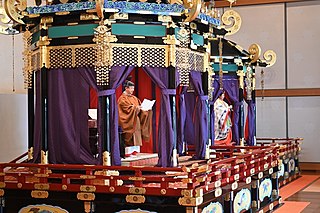 After 30 years on the Chrysanthemum Throne, the then 85-years old Emperor Akihito of Japan abdicated on 30 April 2019, being the first Emperor of Japan to do so since 1817. This marked the end of the Heisei era and the inception of the Reiwa era, and saw numerous festivities leading up to the accession of his son and successor, Emperor Naruhito. The Enthronement Ceremony took place on 22 October 2019. Akihito's younger son, Prince Akishino, is his brother's heir presumptive.