The camp is in Pukchang County and Tukchang district, P'yŏngan-namdo province in North Korea. It is situated along the middle reaches of the Taedong river, which forms the northern boundary of the camp, and also includes the mountains south of the river. On the other side of the Taedong river is the Kaechon internment camp (Kwan-li-so No. 14). [1] According to Hwang Jang-yop, the former leader of the Workers’ Party of Korea, Pukchang camp is the oldest North Korean prison camp and was already erected by 1958. [2] Like in Yodok camp there is one section for political prisoners in lifelong detention and another section functioning as a reeducation camp. Possibly these sections were completely separated earlier and therefore are named Pukchang and Tukchang respectively. [3] While all the other political prison camps belong to the State Security Department, Pukchang camp is run by the Interior Ministry. [4] In some cases, political prisoners were deported to the Kaechon camp, while their relatives (parents, children, siblings, grandchildren) were deported to the Pukchang camp. They are classified as politically unreliable and are imprisoned without any lawsuit or conviction solely on the basis of kinship.

The camp is around 73 km2 (28 sq mi) in area [5] and is surrounded by a 4-metre-high (13 ft) fence. [6] There are several prison labor colonies with barracks for the prisoners and housing for the guards: the 4th, 5th, and 6th divisions. Family members are often allowed to live together. Around 50,000 prisoners live in Pukchang concentration camp. [7] Kim Yong reported the presence of foreign prisoners, but there is no other source to confirm this. [8]

Pukchang camp isolates people from society who are deemed by the North Korean government to be politically unreliable. It was established to exploit the prisoners with hard and dangerous labor. Within the camp borders, there are at least five coal mines, [9] where all capable prisoners have to work from early in the morning to late in the evening. Furthermore, there is a cement factory and some other factories. [10]

Kim Hye-sook has described the human rights situation in detail and testified to the Canadian Parliament and the British Parliament. Rules in Pukchang camp seem to be slightly less strict compared to the human rights situation in other political prison camps. [11] Despite this, prisoners are still shot in cases of escape attempts, thefts of food, or violations of instructions. [12] Kim witnessed more than 100 public executions per year with prisoners being tortured and then shot or hanged as a deterrent to the other prisoners. [13]

The most common causes of death are malnutrition, work accidents, and illnesses. [14] Kim reported that in the 1990s her family only received 7 kg (15 lb) of corn per month and occasionally some bean paste (Doenjang), or salt. [15] In order to survive, they had to search for edible plants, leaves, and insects. [16] She saw bodies lying around the camp and reported cases of cannibalism. [17] Since the prisoners have to work 16–18 hours in the mines every day without any protection, after a few years most suffer from pneumoconiosis and many die from it. Kim developed a pulmonary tumor because of the inhaled dust. [18] Work accidents often lead to limb amputations. Many children have frostbite, because they have no shoes and have to go barefoot even in winter. [19]

Kim reported that the prisoners have no human rights and are treated at the guards’ mercy. To humiliate the prisoners, the guards would often force them to get on their knees, and then spit into the prisoner's mouths and make them swallow the spit. If prisoners do not immediately obey, they are savagely beaten. [20] The prisoners are monitored almost continuously by security agents and are urged to spy on each other and to denounce other prisoners. [21]

According to some sources, the camp ceased operations in 2006. The satellite images, however, show that the mine inside the camp is still operating with civilian laborers. It is likely that some parts of the camp still hold political prisoners, but most of the former camp area has stopped functioning as a labor camp. [22]

In 2016 it was reported that camp 18 had either been re-opened or merged with camp 14 on the other side of the river. Satellite images showed a new security perimeter and increased activity in the area. There also seemed to be an operational ferry between the two camps, giving the suggestion that the camps may have merged. [23]

Hoeryong concentration camp was a prison camp in North Korea that was reported to have been closed in 2012. The official name was KwallisoNo. 22. The camp was a maximum security area, completely isolated from the outside world.

The human rights record of North Korea is often considered to be the worst in the world and has been globally condemned, with the United Nations, the European Union and groups such as Human Rights Watch all critical of the country's record. Most international human rights organizations consider North Korea to have no contemporary parallel with respect to violations of liberty.

Yodok concentration camp was a kwalliso in North Korea. The official name was Kwan-li-so No. 15. The camp was used to segregate those seen as enemies of the state, punish them for political misdemeanors, and put them to hard labour. It was closed down in 2014.

Lee Soon-ok is a North Korean defector and the author of Eyes of the Tailless Animals: Prison Memoirs of a North Korean Woman, her account of being falsely accused, tortured, and imprisoned under poor conditions for crimes against the state and her subsequent release from prison and defection from the country. Since leaving North Korea, she has resided in South Korea.

Kaechon concentration camp is a prison in North Korea with many political prisoners. The official name is Kyo-hwa-so No. 1. It is not to be confused with Kaechon internment camp, which is located 20 km (12 mi) to the south-east.

Kaechon Internment Camp is a labor camp in North Korea for political prisoners and descendants of alleged criminals. The official name for the camp is Kwan-li-so No. 14. The camp is commonly known as Camp 14. It is not to be confused with the Kaechon concentration camp, which is located 20 km (12 mi) to the northwest.

Shin Dong-hyuk is a North Korean-born human rights activist. He is reputed to be the only known prisoner to have successfully escaped from a "total-control zone" grade internment camp in North Korea. He was the subject of a biography, Escape from Camp 14: One Man's Remarkable Odyssey From North Korea to Freedom in the West, by former Washington Post journalist Blaine Harden.

Chongjin concentration camp is a labour camp in North Korea for political prisoners. The official name is Kwan-li-so No. 25. Satellite images show a major expansion of the camp after 2010.

Chongori concentration camp is a reeducation camp in North Korea. The official name of the camp is Kyo-hwa-so No. 12. 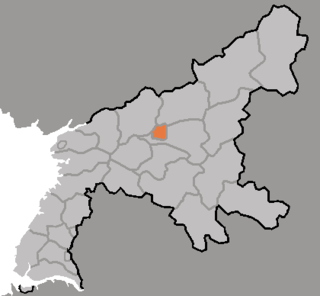 North Korean prisons have conditions that are unsanitary, life-threatening and are comparable to historical concentration camps. A significant number of prisoners have died each year, since they are subject to torture and inhumane treatment. Public and secret executions of prisoners, even children, especially in cases of attempted escape, are commonplace. Infanticides also often occur. The mortality rate is exceptionally high, because many prisoners die of starvation, illnesses, work accidents, or torture.

North Korea's political penal labor colonies, transliterated kwalliso or kwan-ri-so, constitute one of three forms of political imprisonment in the country, the other two being what David Hawk translated as "short-term detention/forced-labor centers" and "long-term prison labor camps", for misdemeanor and felony offenses respectively. In total, there are an estimated 80,000 to 120,000 political prisoners.

Kangdong concentration camp is a reeducation camp in North Korea. The official name of the camp is Kyo-hwa-so No. 4.

Kyo-hwa-so No. 77 Tanchon(77호 단천 교화소) is a "reeducation camp" with ca. 6,000 prisoners near Tanchon in South Hamgyong province, North Korea.

Kyo-hwa-so Hoeryong(회령교화소) is a "reeducation camp" in Hoeryong, in North Hamgyong province of North Korea. It is not to be confused with Haengyong political prison camp, which is located 10 km (6.2 mi) north-east of Hoeryong and is sometimes also called Hoeryong camp. It holds roughly 1,500 prisoners.

Chungsan concentration camp is a reeducation camp in North Korea. Its official name is Kyo-hwa-so No. 11.