Pulborough is a large village and civil parish in the Horsham district of West Sussex, England, with some 5,000 inhabitants. It is located almost centrally within West Sussex and is 42 miles (68 km) south west of London. It is at the junction of the north–south A29 and the east–west (A283) roads.

The village is near the confluence of the River Arun and the River Rother, on the Stane Street Roman road from London to Chichester. It looks southwards over the broad flood plain of the tidal Arun to a backdrop of the South Downs. It is on the northern boundary of the newly established South Downs National Park.

Historically, it was a fording place over the River Arun used by the Romans, who had a mansio across the river at Hardham, one day's march from Chichester on the London road. The Saxons bridged the River Arun here and at nearby Stopham, north of its confluence with the River Rother. It became an important watering and overnight halt for cattle drovers providing easy access to water.

A mile to the west in woodland are the earthwork remains of a motte and bailey castle known as Park Mound, dating from the 11th century.

Transport connections afforded by the River Arun, its navigation, and later by the LBSCR Arun Valley Line brought Pulborough into the industrial age. Good road connections permitted, in the 20th century, the development of manufacturing industry, notably heavy engineering in London Road. This has long since closed down and the site now supports, among other things, a supermarket and a health centre. The village is served by Pulborough railway station.

On the fourth Saturday of September Pulborough hosts a traditional Harvest Fair complete with old time fair ground, welly wanging and a scarecrow competition, and in June the Pulborough duck race society holds its annual duck race, a charity event.

Pulborough is also home to the South Downs Light Railway with its steam and diesel trains running regularly throughout the summer, and a more limited service through the colder months.

Earliest records suggest cricket has been played in Pulborough since 1799. Now based at the Recreation Ground, Pulborough Cricket Club boasts numerous Senior and Junior (Colts) teams. Previously a member club of the Sussex Invitation League, Pulborough's 1st and 2nd Elevens were invited to join the Sussex Cricket League ("the county league") from the 2004 season. A 3rd League XI plays in the West Sussex League, home matches being played nearby at Watersfield. Pulborough was a founder member of the North West Sussex Colts Cricket League (now known as the iDentilam League) in 1987, when it became apparent that schools were not providing adequate cricketing opportunities to local youth. Various age-groups (Under 9s, 10s, 12s, 14s and 16s) now provide ample opportunity to develop cricket skills, played in a competitive environment and ultimately secure the long-term future of the club. The club also provides a mechanism for younger players to progress into senior cricket, with two non-league senior teams playing matches on Sunday afternoons. In 2006, the Sussex Cricket Board recognised the club's efforts towards youth sport, and awarded it ECB 'Focus Club' status. In 2008, the Club launches a junior girls team, thereby continuing the club's ongoing progressive and ambitious plans.

On 17 July 2000, Pulborough made the headlines when the body of missing girl Sarah Payne was found in a field off the A29 near the village. She had been reported missing some 15 miles (24 km) away near Littlehampton 16 days earlier. Roy Whiting, a 42-year-old convicted paedophile, was found guilty of her murder on 12 December 2001 and sentenced to life imprisonment. [4]

On 19 April 2003, the body of 31-year-old Brighton music teacher Jane Longhurst, who had been strangled some weeks earlier, was found at Wiggonholt Common. Her best friend's partner Graham Coutts was found guilty of her murder on 4 February 2004 and sentenced to life imprisonment.

Arundel is a market town and civil parish in a steep vale of the South Downs, West Sussex, England.

West Sussex is a county in South East England on the English Channel coast. The ceremonial county comprises the shire districts of Adur, Arun, Chichester, Horsham, and Mid Sussex, and the boroughs of Crawley and Worthing. Covering an area of 1,991 square kilometres, West Sussex borders Hampshire to the west, Surrey to the north, and East Sussex to the east. The county town and only city in West Sussex is Chichester, located in the south-west of the county. This was legally formalised with the establishment of West Sussex Council in 1888 but within the ceremonial Sussex. After the reorganisation of local government in 1974, the ceremonially fictions of the historic county of Sussex was divided into two separate counties, with the western half becoming West Sussex and the eastern half East Sussex. The existing East and West Sussex councils taking control respectively, with Mid Sussex and parts of Crawly being transferred to West Sussex administration from East Sussex. In the 2011 census, West Sussex recorded a population of 806,900.

Lancing is a large coastal village and civil parish in the Adur district of West Sussex, England, on the western edge of the Adur Valley. It occupies part of the narrow central section of the Sussex coastal plain between smaller Sompting to the west, larger Shoreham-by-Sea to the east, and the parish of Coombes to the north. Excluding definitive suburbs it may have the largest undivided village cluster in Britain. However, its economy is commonly analysed as integral to the Brighton/Worthing/Littlehampton conurbation. Its settled area beneath the South Downs National Park covers 3.65 square miles, the majority of its land.

Chichester is a local government district in West Sussex, England. Its council is based in the city of Chichester and the district also covers a large rural area to the north.

Midhurst is a market town, parish and civil parish in West Sussex, England. It lies on the River Rother 20 miles (32 km) inland from the English Channel, and 12 miles (19 km) north of the county town of Chichester.

Storrington is a small town in the Horsham District of West Sussex, England, and one of two in the civil parish of Storrington and Sullington. Storrington lies at the foot of the north side of the South Downs. As of 2006 it has a population of around 4,600. It has one main shopping street. The A283 road runs directly through the village and connects Storrington to Steyning in the east and Pulborough in the west.

Billingshurst is a village and civil parish in the Horsham District of West Sussex, England. The village lies on the A29 road at its crossroads with the A272, 6 miles (10 km) south-west of Horsham and 5.5 miles (9 km) north-east of Pulborough.

Climping is a village and civil parish containing agricultural and natural sandy land in the Arun District of West Sussex, England. The parish also contains the coastal hamlet of Atherington. It is three miles (5 km) west of Littlehampton, just north of the A259 road.

Madehurst is a small village and civil parish in the Arun District of West Sussex, England on the south slopes of the South Downs in the South Downs National Park. It is three miles (5 km) north-west of Arundel, to the west of the A29 road. The village of Madehurst is in two well-wooded valleys, listed in park guides. 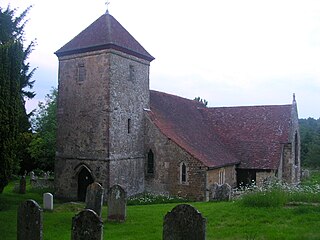 Lodsworth is a small village and civil parish in the Chichester district of West Sussex, England. It is situated between Midhurst and Petworth, half a mile north of the A272 road. It lies within the South Downs National Park, just to the north of the valley of the River Rother and a tributary stream the River Lod runs close to the east end of the village.

Selham is a small village in the Chichester district of West Sussex, England. It lies south of the A272 road 3 miles (4.8 km) east of Midhurst. It is mainly in the civil parish of Graffham, but partly in that of Lodsworth to the north. 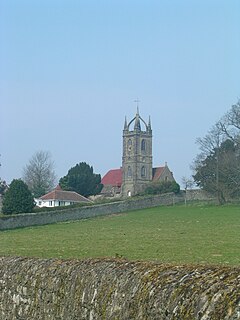 Tillington is a village, ecclesiastical parish and civil parish in the District of Chichester in West Sussex, England, 1 mile (1.6 km) west of Petworth on the A272. The civil parish (CP) includes the hamlets of Upperton, River, and River Common. The land area of the CP is 1,416 hectares ; approximately 500 people lived in 227 households at the 2001 census.

Wisborough Green is a village and civil parish in the north of the Chichester district of West Sussex, England, 2 miles (3.2 km) west of Billingshurst on the A272 road.

Fittleworth is a village and civil parish in the District of Chichester in West Sussex, England located seven kilometres (3 miles) west from Pulborough on the A283 road and three miles (5 km) south east from Petworth. The village has an Anglican church, a primary school and one pub, The Swan. It is within the ancient divisions of the Bury Hundred and the Rape of Arundel. The village is bounded south by the Rother Navigation.

Stopham is a hamlet and civil parish in the District of Chichester in West Sussex, England, about 1.5 miles (2.4 km) west of Pulborough on the A283 road. It is in the civil parish of Fittleworth.

Bury is a village and civil parish in the Chichester district of West Sussex, England. It is located on the A29 road, around 5 miles (8 km) south-west of Pulborough.

Hardham is a small village in the Horsham District of West Sussex, England. It is on the A29 road 1.2 miles (2 km) southwest of Pulborough. It is in the civil parish of Coldwaltham.

Sussex is a historic county and cultural region in the south of England corresponding roughly in area to the ancient Kingdom of Sussex. It is bounded on the north by Surrey, north-east by Kent, south by the English Channel, and west by Hampshire, and is divided for local government into West Sussex and East Sussex and the city of Brighton and Hove. The city of Brighton & Hove was created a unitary authority in 1997, and was granted City status in 2000. Until then Chichester had been Sussex's only city. By convention, Chichester is Sussex's capital city and Lewes is Sussex's county town.

The western Weald is an area of undulating countryside in Hampshire and West Sussex containing a mixture of woodland and heathland areas.

Rotherbridge is a small, rural community situated approximately 1 mile (1.6 km) south-west of Petworth in West Sussex, England. Until 1800, the road from Chichester to Petworth crossed the River Rother by a bridge here; the river acquired its present name from the bridge. Rotherbridge also gave its name to the Hundred of Rotherbridge which comprised several of the surrounding villages, as well as the town of Petworth.