Pwllheli (Welsh pronunciation:  [pʊɬˈhɛlɪ] ) is a market town and community of the Llŷn Peninsula (Welsh : Penrhyn Llŷn) in Gwynedd, north-western Wales. It had a population of 4,076 in 2011 [1] of whom a large proportion, 81%, are Welsh speaking. [2] Pwllheli is the place where Plaid Cymru was founded. It is the birthplace of the Welsh poet Sir Albert Evans-Jones (bardic name Cynan).

Pwllheli has a range of shops and other services. As a local railhead with a market every Wednesday, the town is a gathering point for the population of the whole peninsula.

The town was given its charter as a borough by Edward, the Black Prince, in 1355, [4] and a market is still held each Wednesday in the centre of the town on 'Y Maes' (="the field" or "the town square" in English).

The town grew around the shipbuilding and fishing industries, and the granite quarry at Gimlet Rock (Welsh : Carreg yr Imbill). [5]

During the 1890s, the town was developed by Solomon Andrews, a Cardiff businessman. This work included the promenade, roads and houses at West End. A tramway was built linking the town to Llanbedrog. The trams ran until 1927 when the section of track between Carreg-y-Defaid and Tyddyn-Caled was seriously damaged by a storm. Andrews ran the Cardiff Road section in 1928, and offered to sell the tramway to Pwllheli Corporation at the end of the season, but they did not take up his offer. He then sold the assets, and the Corporation removed the tracks during the winter of 1928/29. [7]

For many years a holiday camp run by Butlins operated a few miles from Pwllheli at Pen-y-chain. During the Second World War it became a naval camp, HMS Glendower, and it operated a hospital for wounded servicemen at Brynberyl on the Pwllheli to Caernarfon road two miles out of town. After the war, Butlins re-established the holiday camp. The camp, now renamed Hafan y Môr ("Haven of the Sea"), has been redeveloped and is now run by the Haven group. [8]

Pwllheli North and Pwllheli South are the county wards covering the town, which each elect one county councillor to Gwynedd Council. [10]

Ysgol Glan y Môr was formed by the merger in 1969 of the former Pwllheli Grammar School at Penrallt and the Frondeg Secondary Modern School in Upper Ala Road, to form a comprehensive school based at two separate sites in the town. The junior pupils (year 1 and year 2) were located at the Penrallt site and the senior pupils (year 3 and upwards) at a new complex in Cardiff Road. This new school was subsequently expanded to accommodate all pupils under the Ysgol Glan y Môr name.

The Penrallt site was later redeveloped as the Pwllheli campus of Coleg Meirion-Dwyfor. The façade of the main building of the old grammar school was retained and incorporated into the design of the current college buildings. Thus the 'old school' is readily seen from the town square (Y Maes) as it has been since the former Pwllheli County School moved to Penrallt in the early 20th century.

Pwllheli railway station is the terminus of the Cambrian Coast Railway running to Machynlleth with services continuing to Shrewsbury and Birmingham. The station is operated and served by Transport for Wales. The rail link to Caernarfon via the Carnarvonshire Railway was axed under the Beeching cuts and closed in December 1964.

Pwllheli is connected to the wider road network by the A497 to Porthmadog and the A499 to Caernarfon. From there, major roads lead away from Gwynedd to the rest of Wales.

Bus services in the town are operated by Arriva Buses Wales and Nefyn Coaches and serve most of the town as well as the rest of the wider Llŷn Peninsula area. Clynnog & Trefor run services to Caernarfon where connections can be made to Bangor and the wider North Wales area. Pwllheli bus station is situated in the town centre.

Pwllheli also has a section of the Wales Coast Path along its shoreline.

According to the United Kingdom Census 2001, 80% of the population speak Welsh, with the highest percentage of Welsh speakers in the 10-14 age bracket, 94%.[ citation needed ]

Pwllheli is home to association football team Pwllheli F.C., rugby union team Pwllheli RFC and running club Llŷn Striders. There is also a well-established hockey club, Clwb Hoci Pwllheli, which is part of the rugby, cricket and hockey club. They play in white, red and green.

Pwllheli is also a hub for water sports, due in part to a large and modern marina, Pwllheli Sailing Club, and Plas Heli - the Welsh National Sailing Academy.

The town has two beaches, South Beach and Glan-y-don. South Beach stretches from Gimlet Rock, across the Promenade and West End, towards Penrhos and Llanbedrog. Glan-y-don Beach is on the eastern side of the river mouth and runs for 3 miles (5 km) from behind the marina workshops and out towards Penychain (holiday camp).

The town also has a golf club on the Llŷn coastline.

Aberdaron is a community, electoral ward and former fishing village at the western tip of the Llŷn Peninsula in the Welsh county of Gwynedd. It lies 14.8 miles (23.8 km) west of Pwllheli and 33.5 miles (53.9 km) south west of Caernarfon, and has a population of 965. The community includes Bardsey Island, the coastal area around Porthor, and the villages of Anelog, Llanfaelrhys, Penycaerau, Rhoshirwaun, Rhydlios, Uwchmynydd and Y Rhiw. It covers an area of just under 50 square kilometres.

Porthmadog, known before 1974 in its anglicised Portmadoc form and locally as "Port", is a Welsh coastal town and community in the Eifionydd area of Gwynedd and the historic county of Caernarfonshire. It lies 5 miles (8 km) east of Criccieth, 11 miles (18 km) south-west of Blaenau Ffestiniog, 25 miles (40 km) north of Dolgellau and 20 miles (32 km) south of Caernarfon. The community population of 4,185 in the 2011 census was estimated at 4,134 in 2019. It developed in the 19th century as a port for slate for England and elsewhere, but as the trade declined, it continued as a shopping centre and tourist destination, being close to Snowdonia National Park and the Ffestiniog Railway. The 1987 National Eisteddfod was held there. It includes the nearby villages of Borth-y-Gest, Morfa Bychan and Tremadog.

Hywel Williams is a Welsh Plaid Cymru politician who has been the Member of Parliament (MP) for Arfon since 2010, having previously represented Caernarfon from 2001.

Penyberth was a farmhouse at Penrhos, on the Llŷn Peninsula near Pwllheli, Gwynedd, which had been the home to generations of patrons of poets, and also a way-station for pilgrims to Bardsey Island, but destroyed in 1936 in order to build a training camp and aerodrome for the RAF.

Coleg Meirion-Dwyfor, also known as CMD, is a college in Gwynedd, Wales with its main campus in Dolgellau. It serves the areas of Meirionydd and Dwyfor. It has a bilingual language policy and offers the opportunity to study most subjects through the medium of Welsh. Since 1 April 2012, it has been a constituent college of Grŵp Llandrillo Menai. 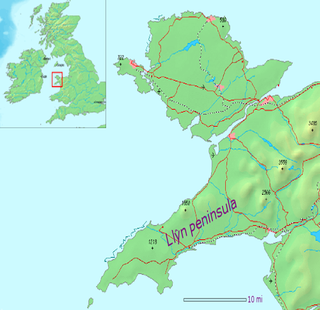 The Llŷn Peninsula extends 30 miles (50 km) into the Irish Sea from North West Wales, south west of the Isle of Anglesey. It is part of the historic county of Caernarfonshire, and historic region and local authority area of Gwynedd. Much of the eastern part of the peninsula, around Criccieth, may be regarded as part of Eifionydd rather than Llŷn, although the boundary is somewhat vague. The area of Llŷn is about 400 km2 (150 sq mi), and its population is at least 20,000. 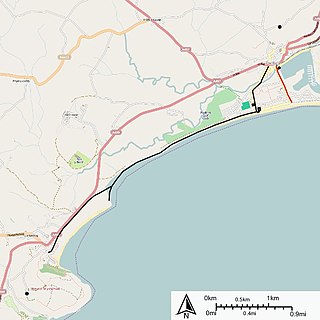 The Pwllheli and Llanbedrog Tramway was a 3 ft narrow gauge horse tramway on the coast of the Llŷn Peninsula in North West Wales, UK. It was originally constructed to convey building stone from Carreg-y-Defaid to Pwllheli's West End, with a second element to run between Pwllheli town centre and the West End resort on the seafront. The two were later connected, and extended to Llanbedrog in July 1897. The tramway was one of many developed by Solomon Andrews.

Gwyneth Glyn is a Welsh language poet and musician.

Ysgol Glan y Môr is a Welsh-medium comprehensive school in the market town of Pwllheli in the Welsh county of Gwynedd. The school serves a large part of the Llŷn Peninsula. There were 480 pupils on roll in 2017, compared with 518 at the time of the last inspection in 2009. According to the latest Estyn inspection report, approximately three-quarters of pupils come from Welsh-speaking or bilingual homes.

Hard Rock Hell is a three day music festival held at Vauxhall Holiday resort, Great Yarmouth. It was previously held at Hafan y Môr Holiday Park, Pwllheli, Gwynedd, North Wales, and up until 2011 at Pontin's Holiday Village, Prestatyn, Wales. Holding the festival in a holiday camp gives the organisers pre-built venues and stages and because of the on-site accommodation allows them to hold a multi day festival over winter/spring months when outdoor camping is not desirable. The first edition of the festival was held at Butlins Holiday Camp, Minehead, England but the festival relocated to its current location in 2008.

Buan is a community in the Welsh county of Gwynedd, located on the Llŷn Peninsula. It includes the villages of Boduan and Rhydyclafdy, and has a population of 469, increasing to 484 at the 2011 Census. Other settlements include Ceidio, Llandudwen and Llanfihangel Bachellaeth.

Sarn Meyllteyrn is a village and former civil parish in the Welsh county of Gwynedd. It is in the west of the Llŷn Peninsula, 8.4 miles (13.5 km) west of Pwllheli and 24.3 miles (39.2 km) south-west of Caernarfon. The village is often referred to simply as Sarn. The parish was abolished in 1934 and divided between the communities of Botwnnog and Tudweiliog.

Butlin's Pwllheli was a holiday camp located near Pwllheli in Wales. The site is now used by Haven Holidays for a caravan park and has been renamed Hafan y Môr. When originally opened in 1947, it was named Butlins Pwllheli, but in 1990 was renamed Starcoast World.

Rhydyclafdy is a small village close to the southern coast of the Llŷn Peninsula in the Welsh county of Gwynedd. It lies 2.8 miles (4.58 km) to the west of Pwllheli and 19.65 miles (31.62 km) south west of Caernarfon. The village forms part of the community of Buan along with Boduan, and together they have a population of 469. 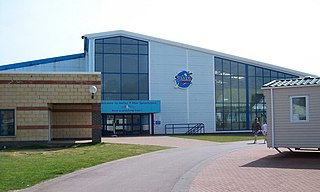 Hafan y Môr is a holiday camp located near Pwllheli in Wales. It is currently run by Haven Holidays.