Pyeongwon of Goguryeo (ruled 559–590) the 25th ruler of Goguryeo, the northernmost of the Three Kingdoms of Korea. Pyeongwon was also known as 'Pyeonggangsanghowang'. His birth name was Yangseong [1] (though the Suishu and Tangshu have him as Tangseong[ citation needed ]).

The years of Pyeongwon's rule are generally agreed upon by historians, but his year of birth has not been established with any degree of certainty. It is known that he was the eldest son of Yangwon of Goguryeo and became crown prince in 557, two years before assuming full power. He is said to have been courageous, and skilled in horseriding and archery. [1] [2]

By this time, royal power had been significantly eroded by the aristocracy. Concerned for the people, he encouraged agricultural and sericultural developments and reduced the royal cuisine. [2]

He maintained tense but relatively peaceful relations with the Göktürks and the various Chinese dynasties, briefly battling the Northern Zhou at the Liaodong Peninsula in 577. He frequently sent tributes to the Chen Dynasty, Northern Qi, Northern Zhou and Sui Dynasty. [1] [2] As the Sui Dynasty united China, King Pyeongwon prepared for the impending war.

The southern border with the other two Korean kingdoms was relatively peaceful as the Silla-Baekje alliance fell apart. In 586, he moved the capital to Jangan fortress. [2]

In 590, the king received news that the state of Chen had fallen and was greatly alarmed. For defense purposes he ordered troops into training and the augmentation of military provisions.[ citation needed ]

The rule of Pyeongwon came to an end in 590, which is the year of his death according to Samguk Sagi, but there is no specific documentation to confirm the circumstances.

He was given the posthumous royal title of King Pyeongwon. [1] 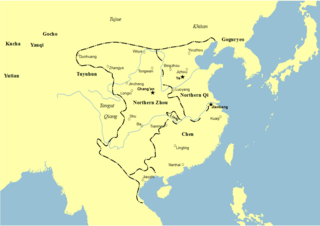 The Chen dynasty, alternatively known as the Southern Chen in historiography, was a Chinese imperial dynasty and the fourth and last of the Southern dynasties during the Northern and Southern dynasties period. Following the Liang dynasty, the Chen dynasty was founded by Chen Baxian. The Chen dynasty further strengthened and revitalized the economy and culture of southern China, and made territorial expansions northward, laying the foundation for future dynasties. It was conquered by the Sui dynasty in 589, marking an end to the Northern and Southern dynasties period in Chinese history. The descendants of the Chen imperial family continued to hold powerful high-ranking positions in the imperial courts of both the Sui and Tang dynasties.

Uija of Baekje was the 31st and final ruler of Baekje, one of the Three Kingdoms of Korea. His reign ended when Baekje was conquered by an alliance of the rival Korean kingdom Silla and China's Tang dynasty.

Wideok of Baekje (525–598) was the 27th king of Baekje, one of the Three Kingdoms of Korea. He was the eldest son of King Seong, and rose to the throne upon his father's death.

Bojang of Goguryeo was the 28th and last monarch of Goguryeo the northernmost of the Three Kingdoms of Korea. He was placed on the throne by the military leader Yeon Gaesomun. His reign ended when Goguryeo fell to the allied forces of the southern Korean kingdom of Silla and the Chinese Tang Dynasty. 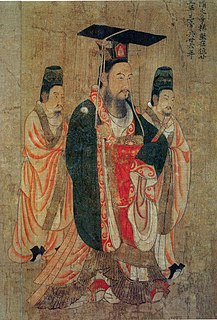 The Emperor Wen of Sui, personal name Yang Jian (楊堅), Xianbei name Puliuru Jian (普六茹堅), alias Narayana deriving from Buddhist terms, was the founder and first emperor of the Chinese Sui dynasty. The Book of Sui records him as having withdrawn his favour from the Confucians, giving it to "the group advocating Xing-Ming and authoritarian government." As a Buddhist, he encouraged the spread of Buddhism through the state. He is regarded as one of the most important emperors in ancient Chinese history, reunifying China in 589 after centuries of division since the fall of the Western Jin dynasty in 316. During his reign, the construction of the Grand Canal began. 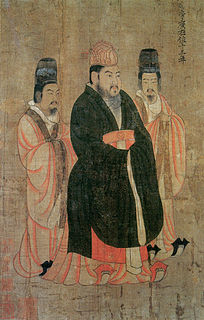 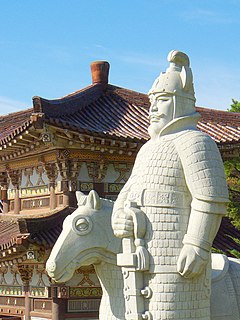 Chumo, posthumously Chumo the Holy, was the founding monarch of the kingdom of Goguryeo, and was worshipped as a god-King by people of Goguryeo. Chumo was originally a Buyeo slang for an excellent archer, which became his name later. He was commonly recorded as Jumong by various Chinese literatures including history books written by Northern Qi and Tang—the name became dominant in future writings including Samguk Sagi and Samguk Yusa. Chumo's title was changed to Dongmyeong the Holy, literally translated to the Bright Holy King of the East, at some point of time prior to compilation of Samguk Sagi (1145). His other names include Chumong, Jungmo, Nakamu, or Tomo. In Samguk Sagi, he was recorded as Jumong with the surname Go, and was also known as Junghae or Sanghae.

Jinpyeong of Silla was the 26th king of the Silla Dynasty, one of the Three Kingdoms of Korea. King Jinpyeong followed in the footsteps of his predecessor, King Jinji, by reorganizing the central ruling system of Silla. Upon the onset of a multitude of conflicts between Baekje and Goguryeo, he sent emissaries to improve relations and strengthen ties between Silla and the Chinese dynasties Sui and Tang. He is also known for his promotion of Buddhism as a spiritual guide for the kingdom and encouraging Buddhist teachings.

King Sosurim of Goguryeo was the 17th ruler of Goguryeo, the northernmost of the Three Kingdoms of Korea. He was the son of King Gogugwon.

King Micheon of Goguryeo was the 15th ruler of Goguryeo, the northernmost of the Three Kingdoms of Korea.

King Yuri was the second ruler of Goguryeo, the northernmost of the Three Kingdoms of Korea. He was the eldest son of the kingdom's founder Chumo the Holy. As with many other early Korean rulers, the events of his life are known largely from the Samguk Sagi.

Yangwon of Goguryeo was the 24th ruler of Goguryeo, the northernmost of the Three Kingdoms of Korea. He was the eldest son of Anwon of Goguryeo. During Yangwon's reign, Goguryeo gradually grew weaker and was obliged to take various urgent measures to block foreign invasions, eventually losing the Seoul region to the alliance of the other two Korean kingdoms.

On Dal, commonly referred to by Koreans as "On Dal the Fool", was a Goguryeo General and the husband of Princess Pyeonggang.

Dugu Qieluo or Dugu Jialuo, formally Empress Wenxian (文獻皇后), was an empress of the Chinese Sui dynasty. She was the wife of Emperor Wen, who, on account of his love and respect for her, as well as an oath they made while they were young, did not have any concubines for at least most of their marriage, an extreme rarity among Chinese emperors. She also bore him all his 10 children. However, she was utterly domineering and ruthless and was exceedingly powerful and influential during her husband's reign and assisted the emperor in running the empire. She was heavily involved in his decision to divert the order of succession from their oldest son Yang Yong to the second son Yang Guang, and her influence in changing the succession eventually led to the fall of the Sui dynasty.

Queen Jeongsun, of the Gyeongju Kim clan, was a posthumous name bestowed to the wife and second queen consort of Yi Geum, King Yeongjo, the 21st Joseon monarch. She was Queen consort of Joseon from 1759 until her husband's death in 1776, after which she was honoured as Queen Dowager Yesun (예순왕대비) during the reign of her step-grandson Yi San, King Jeongjo and as Grand Queen Dowager Yesun (예순대왕대비) during the reign of her step great-grandson Yi Gong, King Sunjo.

Yeongyang of Goguryeo was the 26th monarch of Goguryeo, the northernmost of the Three Kingdoms of Korea. He was the eldest son of Pyeongwon of Goguryeo. During his reign, Goguryeo defeated multiple invasions by the Sui dynasty.

Princess Pyeonggang was a Goguryeo Princess as the daughter of King Pyeongwon and sister of King Yeongyang She was married to General On Dal.