Pylyp Orlyk was born in the village of Kosuta, Ashmyany county, Grand Duchy of Lithuania (Vileyka district of modern-day Belarus), in a family of Czech-Belarusian origin. [1]

Orlyk first studied at the Jesuit college in Vilnius and until 1694 at Kyiv Mohyla Academy. In 1698 he was appointed secretary of the consistory of Kiev metropolia. In 1699 he became a senior member of Hetman Ivan Mazepa's General Military Chancellery and 1706 was appointed general chancellor and at that position he was Mazepa's closest aide, facilitated Mazepa's secret correspondence with the Poles and Swedes, and assisted Mazepa in his efforts to form an anti-Russian coalition. [2]

After the Battle of Poltava in 1709, he escaped together with Hetman Ivan Mazepa and king Charles XII of Sweden to Bender in the Principality of Moldavia, where Mazepa soon died. Pylyp Orlyk was then chosen as a Hetman in exile by the cossacks and the Swedish king Charles XII. While in Bender Orlyk wrote one of the first state constitutions in Europe.[ citation needed ] This Constitution of Pylyp Orlyk was confirmed by Charles XII and it also names him as the protector of Ukraine.

Between 1711 and 1714, together with Crimean Tatars and small groups of Cossacks, Orlyk carried out unsuccessful raids into Right-bank Ukraine. Afterwards, Pylyp Orlyk now together with several other cossacks followed the Swedish king Charles XII to Sweden via Vienna and Stralsund. Orlyk with his family and about 40 other Cossacks arrived in Ystad, Sweden in late November 1715. After some months in Ystad they lived in the city of Kristianstad for some years. Orlyk and his family left Stockholm in 1720 but as late as 1747 his widow and children received financial support from the Parliament of Sweden. From Sweden Orlyk first went to Hamburg, Hannover, Prague, Wrocław and Kraków, where he left his family to stay in a monastery. Orlyk went on to France and in 1722 he arrived in Iaşi in Ottoman Moldavia in order to organize an alliance against Russian Empire. From there he went on to Thessaloniki and from the mid-1730s he is known to have lived in Budjak. He died 1742 in Jassy, Principality of Moldavia (today Iaşi, Romania). [3]

Orlyk wrote numerous proclamations and essays about Ukraine including the 1710 Constitution of Pylyp Orlyk. [4]

In his history of Salonica Mark Mazower says

After years fighting against the Muscovite tsars, Orlyk fled first to Sweden, and then passed through central Europe to the relative safety of the Ottoman lands. On 2 November 1722… the fifty-year-old Orlyk was ordered by the Porte to Salonica. There this cultivated and warm-hearted man spent no less than twelve years in exile, watching the twists and turns of European politics from the sidelines while his impoverished wife remained in Cracow and his eight children were dispersed throughout Europe. Only in March 1734 was he released, thanks to French intervention, and allowed to move north; still trying to organize an uprising in the Ukraine, he died in poverty nine years later. Orlyk's misfortune has proved to be the historian's gain, for from the day of his arrival he kept a diary which offers a unique insight into the eighteenth-century city… His urgent scrawl gives access not only to his voluminous political correspondence, most of which – in Latin, French, Polish and Ukrainian — was duly copied into his journals, but also to the rigours of daily life in his place of exile. The misbehaviour of his loutish servants, the local fare, his bag after a day's shooting in the plains, stories told him by tailors, interpreters and bodyguards enliven its pages. Jesuits, consuls, doctors, spies and the Turkish judges and governors who ran the city all encountered the busy exile. Most of the time, he lived well, considering his predicament... [5]

In 2011 a monument dedicated to Pylyp Orlyk was erected in Kristianstad, Sweden on a building Ukrainian hetman lived in 1716–1719 years to celebrate tercentenary of Pylyp Orlyk's constitution. The authors of the monument are Boris Krylov and Oles Sydoruk.

Pylyp Orlyk married Hanna Hertsyk in the mid-1690s. She was of Jewish descent, a daughter of the colonel Pavlo Semenovych Hertsyk (a close ally of Mazepa) of the Poltava regiment. Pylyp and Hanna had eight children. They were: [6] [7]

The Battle of Poltava was the decisive victory of Peter the Great over the Swedish Empire forces under Field Marshal Carl Gustav Rehnskiöld, in one of the battles of the Great Northern War. 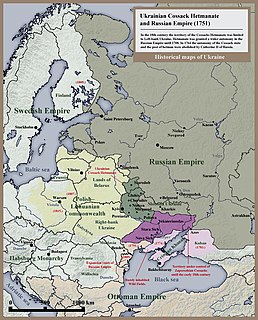 Ivan Skoropadsky was a Ukrainian Hetman of Zaporizhian Host, and the successor to the famous Hetman Ivan Mazepa. 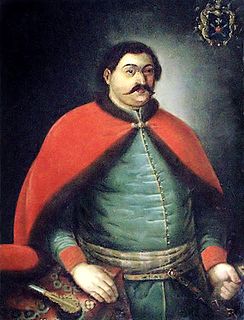 Pavlo Polubotok, was a Ukrainian Cossack political and military leader and Acting Hetman of Left-bank Ukraine between 1722 and 1724. 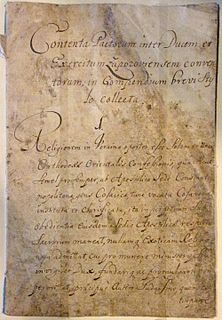 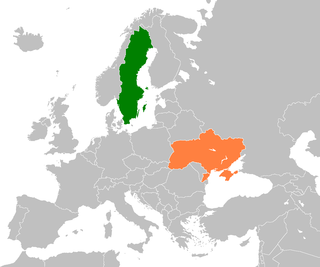 Pavlo Semenovych Hertsyk was a Ukrainian Cossack officer of Jewish origin, the colonel of the Poltava Regiment of the Cossack Hetmanate. He and his sons were important allies of Hetman Ivan Mazepa.

The Nizhyn Regiment was one of ten territorial-administrative subdivisions of the Cossack Hetmanate. The regiment's capital was the city of Nizhyn, now in Chernihiv Oblast of central Ukraine. Other major cities of the regiment were Hlukhiv and Baturyn.

Grégoire Orlyk, also Hryhor Orlyk, was a French military commander, special envoy and member of Louis XV's secret intelligence service. Grégoire Orlyk was born in Ukraine, the son of Ukrainian hetman in exile Pylyp Orlyk and Hanna Hertsyk. He received a good education in Sweden, served in Poland and Saxony, and participated in the secret efforts of France to restore Stanisław Leszczyński to the Polish throne. He later commanded the king's regiment of Royal suedois. For his intelligence work and military exploits he was given the title of comte and promoted to the general's rank of Maréchal de camp. Grégoire Orlyk was an acquaintance of the French philosopher Voltaire, and championed the Ukrainian cause in France and other countries.

Poltava is a narrative poem written by Aleksandr Pushkin in 1828–29 about the involvement of the Ukrainian Cossack hetman Ivan Mazepa in the 1709 Battle of Poltava between Sweden and Russia. The poem intertwines a love plot between Mazepa and Maria with an account of Mazepa's betrayal of Tsar Peter I and Peter's victory in battle. Although often considered one of Pushkin's lesser works and critiqued as unabashedly imperialistic, a number of critics have praised the poem for its depth of characterization and its ability to synthesize disparate genres. The poem inspired Tchaikovsky's 1884 opera Mazeppa.

Hetman of the Zaporizhian Host is a former historic government office and political institution of the Cossack Hetmanate that was its head of state. The office was liquidated on the edict of Russian Governing Senate of 17 November 1764.

Kost Hordiyenko was a Zaporozhian Cossack Kosh otaman. After 1709 he allied with Ivan Mazepa, and co-authored the Constitution of Pylyp Orlyk.

Hanna Hertsyk, was a Ukrainian Hetmana by marriage to Pylyp Orlyk, Hetman of Ukraine. She is known for her support of her spouse in the fight for an independent Ukraine during the Great Northern War and took responsibility for his affairs during his diplomatic missions in Europe. She joined him in exile and lived in Sweden in 1709–21, during which she corresponded with several rulers in Europe to support her husband's cause. She was the daughter of Pavlo Semenovych Hertsyk.

The Baturyn Fortress Citadel is an architectural and memorial complex on the territory of Baturyn, is a museum of the National Historical and Cultural Reserve "Hetman's Capital". 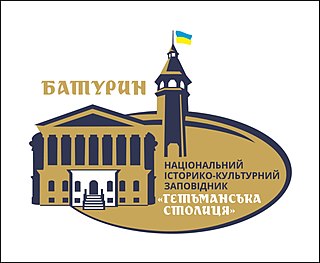