Before 1999, the Qikiqtaaluk Region existed under slightly different boundaries in the Northwest Territories as the Baffin Region, in the northern part of the District of Keewatin.

The western half of the nearby Hans Island is part of Qikiqtaaluk, while the eastern half is part of the Greenlandic municipality of Avannaata.

Formerly there was a mining town at Nanisivik. However, it and the Nanisivik Mine closed in 2002, with Nanisivik Airport closing in 2010 and all flights transferred to Arctic Bay Airport.

Like the majority of Canada's Inuit communities, the region's traditional foods include seal, Arctic char, walrus, polar bear, and caribou. [1]

Inhabitants of the Qikiqtaaluk Region are called Qikiqtaalungmiut.[ citation needed ]

Iqaluit has the Astro Hill Complex, the Nunatta Sunakkutaangit Museum and the Legislative Building of Nunavut and the Unikkaarvik Visitors Centre.

According to anthropologists and historians, the Inuit are the descendants of the Thule people who displaced the Dorset culture (in Inuktitut, the Tuniit). [18] [19] By 1300 the Inuit had trade routes with more southern cultures. [20]

About 1910, Europeans markets increased their interest in white fox pelts. The distribution and mobility of Inuit changed as the expanded their traditional hunting and fishing routes to participate in the white fox fur trade. Traditional food staples—such as seal and caribou—were not always found in the same regions as white fox. [1] The Hudson's Bay Company—which was chartered in 1670—had been opening fur trading posts throughout Inuit and First Nations territory. By 1910, the HBC was restructured into a lands sales department, retail and fur trade. The HBC dominated the fur trade under minimal supervision from the Canadian government, and some Anglican and Catholic missionaries who lived near remote northern hamlets. By 1922 most of imported goods acquired by Inuit were from the HBC. [1]

Between 1950 and 1975 thirteen northern communities were relocated.[ further explanation needed ] [1]

Killing of the sled dogs

In the 1950s and 1960s the Royal Canadian Mounted Police (RCMP) and others in authority undertook "the widespread killing of sled dogs". [1]

The Qikigtani Truth Commission—which was commissioned, conducted, and paid for by an Aboriginal organization, the Qikiqtani Inuit Association and took place from 2007 to 2010—brought together historians and Inuit to revisit the history of the Qikigtaaluk Region. [1] 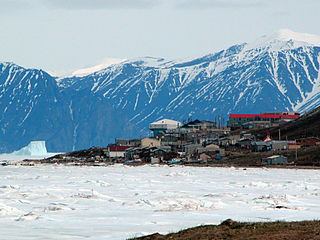 Lancaster Sound is a body of water in the Qikiqtaaluk Region, Nunavut, Canada. It is located between Devon Island and Baffin Island, forming the eastern entrance to the Parry Channel and the Northwest Passage. East of the sound lies Baffin Bay; to the west lies Viscount Melville Sound. Further west a traveller would enter the M'Clure Strait before heading into the Arctic Ocean. 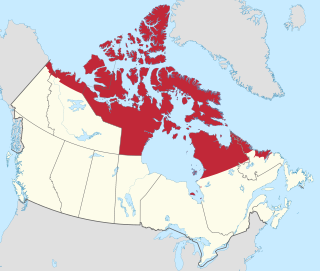 The North Baffin dialect of Inuktitut is spoken on the northern part of Baffin Island, at Igloolik and the adjacent part of the Melville Peninsula, and in other Inuit communities in the far north of Nunavut, like Resolute, Grise Fiord, Pond Inlet, Clyde River, and Arctic Bay.

Kangiqtualuk Uqquqti formerly Sam Ford Fiord is an isolated, elongated Arctic fjord on Baffin Island's northeastern coast in the Qikiqtaaluk Region of Nunavut, Canada. The Inuit settlement of Pond Inlet is 320 km (200 mi) to the northwest and Clyde River is 80 km (50 mi) to the east.

Arviqtujuq Kangiqtua formerly Eglinton Fiord is a fjord on Baffin Island's northeastern coast in the Qikiqtaaluk Region of Nunavut, Canada. The Inuit settlement of Pond Inlet is 355 km (221 mi) to the northwest and Clyde River is 55 km (34 mi) to the east.

Wikimedia Commons has media related to Qikiqtaaluk Region .
This page is based on this Wikipedia article
Text is available under the CC BY-SA 4.0 license; additional terms may apply.
Images, videos and audio are available under their respective licenses.