Qu Bo started his football career playing for Tianjin Locomotive's youth team where he was spotted by and then transferred to top-tier side Qingdao in 2000. He would quickly establish himself as an exciting young player and go on to play in seventeen league games while scoring eight goals, which would be enough to personally win the Chinese Football Association Young Player of the Year award at the end of the 2000 league season. [1] Qu would continue to be a vital member of the team and after playing in the 2002 FIFA World Cup where he would draw considerable interest from Premier League club Tottenham Hotspur where he had a month-long stint with them before leaving due to the lack of a work permit. [2] On his return to Qingdao, he would show his importance to the team by helping the team win the club's first ever Chinese FA Cup at the end of the 2002 league season. [3]

On 22 February 2010, after spending ten years at Qingdao, Qu transferred to top-tier side Shaanxi Chanba. [4] He soon made his debut for the club in a league game against Dalian Shide on 28 March 2010 in a 1–1 draw. [5] After waiting several months, he would eventually score his first goal for the club on 14 July 2010 in a 2–1 win against Shanghai Shenhua. [6] At the beginning of the 2012 season, Qu followed the club when it decided to move to Guizhou and rename themselves Guizhou Renhe. [7]

Qu's lightning pace first caught the eye of many at the 2000 AFC Youth Championship where he scored four goals for his country. [11] After playing in the 2001 FIFA World Youth Championship, he would quickly catch the attention of Bora Milutinovic who included him into the 2002 FIFA World Cup squad where he preferred to place Qu at the wing so he can get the best out of the young prospect's pace. [11] Since his initial rise to the national team, Qu has had difficulty in retaining his position as a consistent member of the team. He was not selected for the 2004 AFC Asian Cup squad and was forced out with injury in the 2007 AFC Asian Cup squad. He was however brought back to the national team for several qualifying games and worked his way back into the side. [12]

Sun Jihai is a Chinese former footballer who played in the English Premier League. He is one of the most well-known footballers in China. He was the first East Asian footballer to score in the Premier League when he scored a goal for Manchester City in October 2002, and also the first Chinese footballer to score in the UEFA Cup. Sun was a member of the Chinese national team that qualified for the 2002 FIFA World Cup, the country's only appearance at the World Cup.

Du Wei is a Chinese footballer.

Beijing Renhe Football Club was a professional Chinese football club that last participated in the Chinese League One under licence from the Chinese Football Association (CFA). The team was based in Fengtai, Beijing and their home stadium was the Beijing Fengtai Stadium that has a seating capacity of 31,043. Their last majority shareholder was Chinese property developers of shopping centers Renhe Commercial Holdings Company Limited.

Gyawe Jonas Salley is a former Ivorian-Australian footballer, who last played for Hohhot Zhongyou in China League One. He is currently an assistant coach for Qingdao Red Lions.

Yu Hai is a Chinese footballer who currently plays for Shanghai SIPG in the Chinese Super League.

Liu Jian is a Chinese footballer who currently plays for Qingdao in the Chinese Super League. He also played for China national football team between 2007 and 2013 and scored over 30 caps. He normally plays as a midfielder, but can also deployed as deep lying playmaker.

Wan Houliang is a Chinese international footballer where he currently plays as a defender for Beijing Renhe in the China League One.

Gong Lei is a Chinese football manager and former player as well as media pundit.

Yang Yihu is a Chinese footballer who currently plays for Meizhou Hakka in the China League One.

Li Chunyu is a Chinese former professional football player who played as a midfielder.

Zhang Chenglin is a Chinese footballer who currently plays for China League One club Kunshan F.C. on loan from Guangzhou F.C..

The 2012 Guizhou Renhe season is Guizhou Renhe's 11th consecutive season in the top division of Chinese football. They also competed in the Chinese FA Cup that year, making it to the final of that competition. 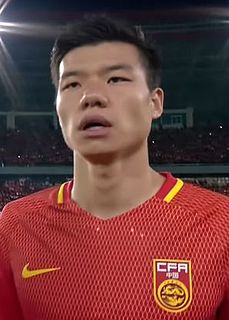 Mei Fang is a Chinese footballer who currently plays for Guangzhou Evergrande in the Chinese Super League.

Chen Zijie is a Chinese footballer.