Río de Oro (Spanish for "Gold River"; Arabic : وادي الذهب‎, wādī-að-ðahab, often transliterated as Oued Edhahab) was, with Saguia el-Hamra, one of the two territories that formed the Spanish province of Spanish Sahara after 1969; it had been taken as a Spanish colonial possession in the late 19th century. Its name seems to come from an east–west river which was supposed to have run through it. The river was thought to have largely dried out – a wadi, as the name indicates – or have disappeared underground.

The Spanish name is derived from its previous name Rio do Ouro, given to it by its Portuguese discoverer Afonso Gonçalves Baldaia in 1436. The Portuguese prince Henry the Navigator dispatched a mission in 1435, under Gil Eanes and Baldaia, to find the legendary River of Gold in western Africa. Going down the coast, they rounded the al-Dakhla peninsula in present-day Western Sahara and emerged into an inlet, which they excitedly believed to be the mouth of the River of Gold (see Senegal River). The name continued to be used for the inlet and the surrounding area although no gold was found there, neither in the water of the narrow gulf, probably mistaken for the river itself, nor in its neighborhood.

Occupying the southern part of Western Sahara, the territory lies between 26° to the north and 21° 20' to the south. The area is roughly 184,000 km (114,000 mi), making it approximately two thirds of the entire Western Sahara. [1] The former provincial capital founded by the Spanish was Villa Cisneros, which was renamed under Moroccan administration in 1976 "ad-Dakhla". [2]

The Battle of Río de Oro was a single-ship action fought in August 1914 during the First World War. A British protected cruiser attacked a German auxiliary cruiser off the small Spanish colony of Río de Oro.

In 1975, as Spain retreated from the territory, Western Sahara was split under the Madrid Accords between Mauritania and Morocco, even if this division was bitterly contested by the Polisario Front. The dividing line ran halfway through Río de Oro, with Morocco taking the northern part plus Saguia el-Hamra, and Mauritania annexing the lower third of the colony as a northern province called Tiris al-Gharbiyya (Western Tiris). Its provincial capital was already called Dakhla. After a disastrous four-year war with the Polisario, Mauritania relinquished Tiris al-Gharbiyya, withdrew from Western Sahara, and left Morocco and the Polisario as the sole belligerents in the conflict, which is not yet resolved; a cease-fire has been in effect since 1991. [3]

This area is today divided by the Moroccan military berm, with Morocco occupying the parts to the west of it, and the Polisario Front-held Free Zone, under the control of the Sahrawi Arab Democratic Republic to the east. These zones are temporary divisions negotiated as a part of the United Nations Mission for the Referendum in Western Sahara (MINURSO) ceasefire. [4]

The politics of Western Sahara take place in a framework of an area claimed by both the partially recognized Sahrawi Arab Democratic Republic and Morocco. 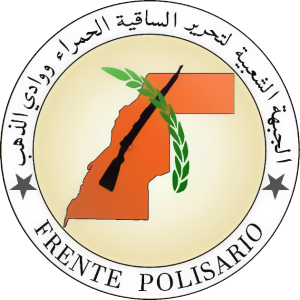 Dakhla is a city in Western Sahara, a disputed territory currently administered by Morocco. It is the capital of the Moroccan administrative region Dakhla-Oued Ed-Dahab. It has a population of 106,277 and is built on a narrow peninsula of the Atlantic Coast, the Río de Oro Peninsula, about 550 km south of Laayoune.

The Green March was a strategic mass demonstration in November 1975, coordinated by the Moroccan government, to force Spain to hand over the disputed, autonomous semi-metropolitan province of Spanish Sahara to Morocco. The demonstration of some 350,000 Moroccans advanced several kilometres into the Western Sahara territory, escorted by nearly 20,000 Moroccan troops, Morocco later gained control over most of the former Spanish Sahara, which it continues to hold.

Saguia el-Hamra was, with Río de Oro, one of the two territories that formed the Spanish province of Spanish Sahara after 1969. Its name comes from a waterway that goes through the capital. The wadi is inhabited by the Oulad Tidrarin Sahrawi tribe. 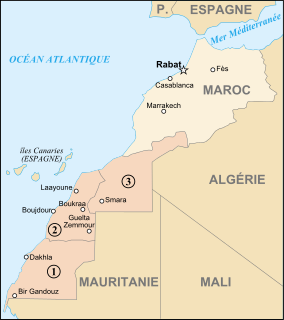 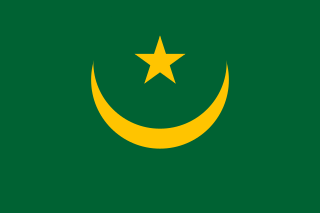 Tiris al-Gharbiyya was the name for the area of Western Sahara under Mauritanian control between 1975 and 1979.

The Sahrawi Arab Democratic Republic, commonly known as Western Sahara, uses a national flag consisting of a black, white and green horizontal tricolor charged with a red star and crescent in the center stripe and a red chevron at the hoist. It is used on Polisario-controlled areas, while the Moroccan flag is used on the rest of the occupied territory.

"Greater Mauritania" is a term for the Mauritanian irredentist claim to Western Sahara, and possibly other Moorish or Sahrawi-populated areas of the western Sahara desert.

Jira Bulahi Bad is an Sahrawi engineer, politician, and activist. She is the representative of the Polisario Front in Spain since 2016. 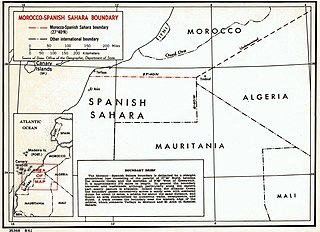