Rørvig is surrounded by water on three sides: to the north is the Kattegat, to the east is the channel leading into the Isefjord, and to the south is Roskilde Fjord. There is a small fishing industry there, as well as a marina for pleasure craft. The pier is excellent for crabbing (take a peg, a long piece of string and a bucket; the local fish shop usually has old fish heads for bait!). A small distance from Rørvig is a site that is the centre of Denmark. The centre of Denmark is marked with a big stone. At Rørvig harbour, a fishing boat which is a boat that was used during WW2 for dearming mines out at sea. on the boat, you get a fishing rod and worms for fishing flounder and other flat fish, occasionally you can catch a puffer.

There are several places where you can stay. A popular place to stay is Rørvig senter which is a set of summer houses you can rent. These houses usually have two bedrooms, a kitchen-livingroom-dining room, hall and two bathrooms. Each building is split into two. Recently they have built luxury houses which are bigger and more suitable for families. There is a grill in the centre which can be used by all. There are several shops in the centre of Rørvig including meny (a big food shop) a butcher and some clothing shops.

Rørvig is located a few kilometres from Nykøbing Sjælland.

The famous Solvognen chariot from the Nordic Bronze Age has been on display at a museum in Rørvig since it was found in the bogs.

A popular trip is walking from Rørvig to Kattegat since there is a lot of wildlife and plant life on the way. There are many species in Rørvig since there are few cars and people. It is not uncommon to see deer and hares, this is why some people like hunting in these areas. There are also many birds but most of them are common types, like magpies, thrushes, sparrows, blue tits, great tits, blackbirds, Herring gulls, hooded gulls. Of the more rare birds are geese, grouse, and some other types of thrushes. Snails, slugs wasps and just about all other common insects are found in Rørvig.

The Hundested-Rørvig vehicle ferry runs regularly between Rørvig and the small town of Hundested. 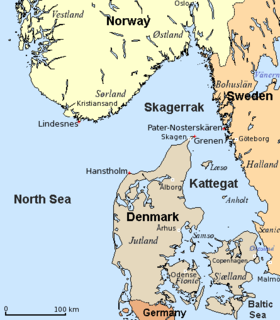 The Kattegat is a 30,000 km2 (12,000 sq mi) sea area bounded by the Jutlandic peninsula in the west, the Danish Straits islands of Denmark to the south and the provinces of Västergötland, Skåne, Halland and Bohuslän in Sweden in the east. The Baltic Sea drains into the Kattegat through the Danish Straits. The sea area is a continuation of the Skagerrak and may be seen as a bay of the Baltic Sea or the North Sea or, as in traditional Scandinavian usage, neither of these.

Hundested is a town with a population of 8,616 and a former municipality in Region Hovedstaden in the northern part of the island of Zealand (Sjælland) in eastern Denmark.

Molslinjen, previously called Mols-Linien is a Danish company that operates ferry services between Jutland (Jylland) and the island of Zealand (Sjælland). In March 2017, the routes in the Kattegat were renamed to Molslinjen, while the Bornholms services would continue to trade as Bornholmslinjen.

Sjællands Odde is a 15 km long peninsula on the northwest coast of Zealand between the Kattegat and Sejerø Bay. From the outermost point of the peninsula, Gniben, a reef juts some 10 km out into the Kattegat.