RFA Spabeck (A227) was a coastal water carrier of the Royal Fleet Auxiliary.

Spabeck, ordered in September 1941, was laid down on 14 May 1943, and launched on 21 June 1943 as Rivulet. Commissioned on 3 September 1943 as Spabeck, she was decommissioned in March 1966 after having been used to carry hydrogen peroxide fuel for the experimental submarines Explorer and Excalibur. Laid up at Devonport, she arrived at Antwerp en route to Willebroek for scrapping on 14 May 1966. [1] 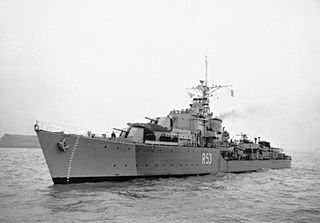 The U and V class was a class of sixteen destroyers of the Royal Navy launched in 1942–1943. They were constructed in two flotillas, each with names beginning with "U-" or "V-". The flotillas constituted the 7th Emergency Flotilla and 8th Emergency Flotilla, built under the War Emergency Programme. These ships used the Fuze Keeping Clock HA Fire Control Computer. 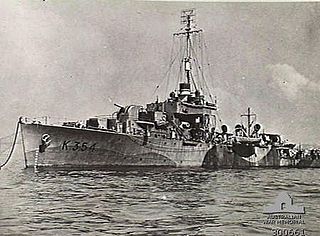 HMAS Gascoyne (K354/F354/A276) was a River-class frigate that served in the Royal Australian Navy (RAN). Laid down in 1942 and commissioned in 1943, the frigate served during World War II, before being placed in reserve in 1946. Reactivated in 1959, Gascoyne was reclassified as a survey and research ship, a role she fulfilled until she was decommissioned again in 1966, and sold for scrap in 1972.

USS Joseph E. Campbell, a Buckley-class destroyer escort of the United States Navy, was named in honor of Ensign Joseph Eugene Campbell (1919–1942), who was killed in action while engaging the enemy on 9 August 1942. 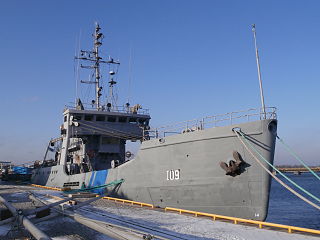 USCGC Bittersweet was a C or Iris-class 180-foot buoy tender of the United States Coast Guard. 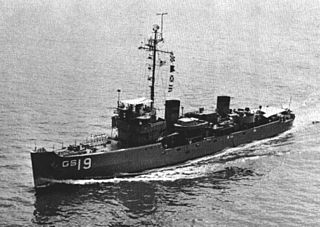 USS Sheldrake (AM-62/AGS-19) was an Auk-class minesweeper built for the United States Navy during World War II. The ship was named after the sheldrake duck. The ship earned four battle stars during World War II. She was converted to a survey ship and re-designated AGS-19 in 1952 and remained in commission until 1968. She was sold for scrap in 1971. 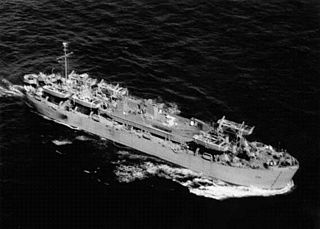 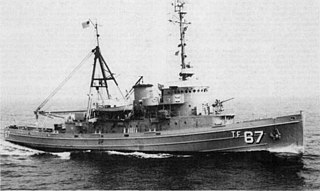 The Chamois class were French minesweeping sloops ordered between 1935 and 1939. They were similar in design to the Elan class, and like them classed as minesweepers, but were actually used as anti-submarine ships, convoy escorts and patrol vessels.

SS Peter Zenger was a Liberty ship built in the United States during World War II. She was named after John Peter Zenger, a printer and journalist in New York City that printed The New York Weekly Journal. He was accused of libel in 1734, by William Cosby, the governor of New York, but the jury acquitted Zenger, who became a symbol for freedom of the press.

SS Salvador Brau was a Liberty ship built in the United States during World War II. She was named after Salvador Brau, a journalist, poet, dramatist, novelist, historian, and sociologist. He was designated the official historian of Puerto Rico in 1903, by the first American-appointed governor William Henry Hunt.