RIA Novosti (Russian : РИА Новости), sometimes referred to as RIAN (РИАН) or RIA (РИА) is a Russian state-owned domestic news agency. On 9 December 2013 by a decree of Vladimir Putin it was liquidated and its assets and workforce were transferred to the newly created Rossiya Segodnya agency. [1] On 8 April 2014 RIA Novosti was registered as part of the new agency. [2]

RIA Novosti is headquartered in Moscow. The chief editor is Anna Gavrilova.

RIA Novosti was scheduled to be closed down in 2014; starting in March 2014, staff were informed that they had the option of transferring their contracts to Rossiya Segodnya or sign a redundancy contract. [3] On 10 November 2014, Rossiya Segodnya launched the Sputnik multimedia platform as the international replacement of RIA Novosti and Voice of Russia. Within Russia itself, however, Rossiya Segodnya continues to operate its Russian language news service under the name RIA Novosti with its ria.ru website.[ citation needed ]

The agency published news and analyses of social-political, economic, scientific and financial subjects on the Internet and via e-mail in the main European languages, as well as in Persian, Japanese and Arabic. [4] [5] It had a correspondent network in the Russian Federation, CIS and over 40 non-CIS countries. [4] Its clients include the presidential administration, Russian government, Federation Council, State Duma, leading ministries and government departments, administrations of Russian regions, representatives of Russian and foreign business communities, diplomatic missions, and public organizations. [4]

The last editor-in-chief of RIA Novosti was Svetlana Mironyuk, [4] the first woman appointed to the role in the agency's history. According to the organisation's Charter, enterprise's property was federally owned (because federal unitary enterprise) and was indivisible. [6] [7] According to the agency, it was partially government-subsidized (2.7–2.9 billion roubles in 2013 [8] ), but maintained full editorial independence. [9]

RIA Novosti's history dates back to 24 June 1941, when by a resolution of the USSR Council of People's Commissars and the Communist Party Central Committee, "On the Establishment and Tasks of the Soviet Information Bureau", the Soviet Information Bureau (Sovinformburo) was set up under the USSR Council of People's Commissars and the Central Committee. Its main task was to oversee work to cover international, military events and the events of the country's domestic life in periodicals and on the radio (from 14 October 1941, to 3 March 1942, was based in Kuibyshev – modern-day Samara). [4]

Through 1,171 newspapers, 523 magazines and 18 radio stations in 23 countries, Soviet embassies abroad, friendship societies, trade unions, women's, youth and scientific organizations, Sovinformburo informed readers and listeners about the struggle of the Soviet people against Nazism and in the post-war years about the main areas of Soviet domestic and foreign policies. [4]

The APN founders were the USSR Journalists Union, USSR Writers Union, Union of Soviet Societies of Friendship and Cultural Relations with Foreign Countries, and the Znaniye Society. On 3 April 1961, the Agency charter was adopted. Under its charter, APN's aim was "to contribute to mutual understanding, trust and friendship among peoples in every possible way by broadly publishing accurate information about the USSR abroad and familiarizing the Soviet public with people’s lives of foreign countries." APN's motto was "Information for Peace, for the Friendship of Nations". APN had bureaus in over 120 countries. The Agency published 60 illustrated newspapers and magazines in 45 languages with a one-time circulation of 4.3 million copies. With the Union of Soviet Friendship Societies, APN published the newspaper, Moscow News, which in September 1990 became an independent publication. APN Publishing House put out over 200 books and booklets with a total annual circulation of 20 million copies. In 1989, a TV center opened in APN. Later, it was transformed into the TV-Novosti TV company, [4] which, since 2005, operates RT media network.

By a decree of USSR President Mikhail Gorbachev, "On the Establishment of the Information Agency Novosti," the Information Agency Novosti (IAN) succeeded APN on 27 July 1990. "To provide information support for the USSR's state domestic and foreign policies and proceeding from the interests of the democratization of the mass media," the Novosti Press Agency was renamed the Information Agency Novosti (IAN). IAN's tasks remained the same – "preparing and publishing printed, TV and radio materials in the USSR and abroad; studying public opinion on Soviet foreign and domestic policies in the USSR and abroad." A computer databank was created in the Agency. Initially, it contained over 250,000 documents. In 1991, the Infonews hotline started operating in the Agency. IAN had bureaus in 120 countries. It published 13 illustrated magazines and newspapers. The chairman of the IAN Board was Albert Ivanovich Vlasov. [4]

In May 1998, the agency was renamed the Russian Information Agency Vesti. As a mass media body, it retained the name of RIA Novosti on 1 April 2004, after making changes in the founding documents. [4] In 2005, RIA Novosti launched RT (originally Russia Today) a global multilingual television news network, which is a government-funded but autonomous, non-profit organization. RIA Novosti asserts that it "merely participated in establishing the channel" which retained "complete legal, editorial and operational independence." [10]

On 9 December 2013 Russian President Vladimir Putin signed the liquidation of RIA Novosti "On some measures to improve the effectiveness of the state mass media" [11] and merging it with the international radio service Voice of Russia to create Rossiya Segodnya. [12] [13] [14] Dmitry Kiselyov, a former anchorman of the Channel One Russia is appointed as the president of the new information agency. [15] [16] According to her interview, the editor-in-chief of the TV network RT, Margarita Simonyan was completely unaware about the reorganization of the information agency and got the information from listening to competitor radio station Kommersant-FM. [17] The reorganization created concerns that RIA Novosti would become a propaganda outlet. [18] [12]

On 8 April 2014 RIA Novosti was registered by Roskomnadzor as a news agency [19] and online newspaper. [20]

On 26 February 2022, during the Russian invasion of Ukraine, RIA Novosti by mistake published an article titled "The arrival/attack of Russia and the new world" ("Наступление России и нового мира"), which was prepared ahead of the time anticipating the Russian victory. In particular, it announced that Russia had won the Russo-Ukrainian War and that "Ukraine has returned to Russia". [21] [22] In the article, author Petr Akopov condemned "Anglo-Saxons who rule the West" for allegedly attempting to "steal Russian lands", described the 1991 dissolution of the Soviet Union as a "terrible catastrophe", and asserted that Russian President Vladimir Putin's launch of the invasion resolved the "Ukrainian question" to establish a "new world order" with "Russia, Belarus and Ukraine, acting in geopolitical terms as a single whole" against the remainder of Europe. [21] [23] [24] [25] The article was promptly removed by RIA Novosti, but not before it was republished by the state-owned news agency Sputnik and translated by the Pakistani newspaper The Frontier Post into English under the title "The new world order". [21] [24] [26]

On 3 April 2022, RIA published "What Russia should do with Ukraine", an article condemned for genocidal intent. [27] 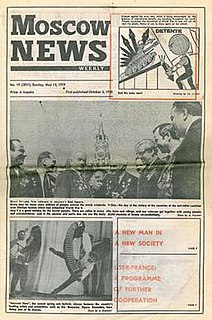 The Moscow News, which began publication in 1930, was Russia's oldest English-language newspaper. Many of its feature articles used to be translated from the Russian language Moskovskiye Novosti.

Moskovskiye Novosti was a Russian-language daily newspaper in Russia relaunched in 2011. The paper - by then a 'youth-oriented' free sheet handed out at more than 850 places around Moscow - on 23 January 2014 announced that it would cease publication on 1 February that year. 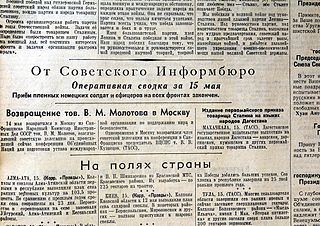 Soviet Information Bureau was a leading Soviet news agency, operating from 1941 to 1961.

Lenta.ru is a Russian-language online newspaper. Based in Moscow, it is owned by Rambler Media Group. In 2013, the Alexander Mamut-owned companies "SUP Media" and "Rambler-Afisha" merged to form "Afisha.Rambler.SUP", which owns Lenta.ru. The online newspaper is one of the most popular Russian language online resources with over 600 thousand visitors daily.

Television, magazines, and newspapers have all been operated by both state-owned and for-profit corporations which depend on advertising, subscription, and other sales-related revenues. Even though the Constitution of Russia guarantees freedom of speech the press has been plagued by both government censorship and self-censorship. 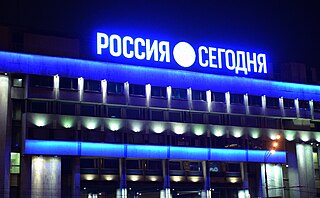 MIA Rossiya Segodnya is a media group owned and operated by the Russian government, created on the basis of RIA Novosti. The group owns and operates Sputnik, RIA Novosti, inoSMI and several other entities. The head of the organisation is Dmitry Kiselyov. Margarita Simonyan is the chief editor.

Svetlana Vasiliyevna Mironyuk is a Russian top manager who is currently a Professor of Business Practice and Dean for Operations and Digital at SKOLKOVO School of Management. Former media executive, head and editor-in-chief of the RIA Novosti news agency, having been appointed chair of the board in 2003 and director general in 2004. A graduate of Moscow State University. 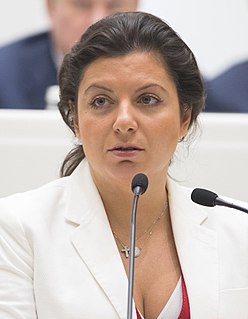 Margarita Simonovna Simonyan is a Russian journalist. She is the editor-in-chief of the Russian state-controlled media organisations RT and Rossiya Segodnya. In 2022, Simonyan was sanctioned by the European Union as "a central figure of the [Russian] Government propaganda" responsible for "actions and policies which undermine the territorial integrity, sovereignty and independence of Ukraine".

Sputnik is a Russian state-owned news agency, news website platform and radio broadcast service. It was established by the Russian government-owned news agency Rossiya Segodnya on 10 November 2014. With headquarters in Moscow, Sputnik claims to have regional editorial offices in Washington, D.C., Cairo, Beijing, Paris, Berlin, Madrid, Montevideo and Rio de Janeiro. Sputnik describes itself as being focused on global politics and economics and aims for an international audience.

The free online encyclopedia Wikipedia was briefly blocked in Russia in August 2015. Some articles of Wikipedia were included into various censorship lists disseminated by the government. Further threats to block were made following the 2022 Russian invasion of Ukraine. 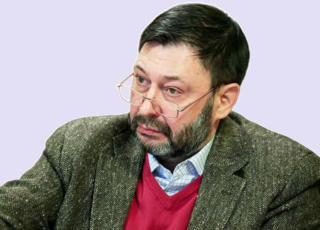 Kirill Valeryevich Vyshinsky is a journalist. He was the director of RIA Novosti's Ukraine branch (2014-2018). In 2018, Vyshinsky was arrested in Ukraine on charges of treason. In September 2019 he was exchanged to Russia where he continued his journalistic career. 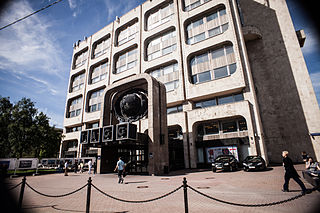 A Russian concept of information war against Ukraine was first enunciated by Valery Gerasimov in 2013 to describe a Western information war that he believed that Russia needed to counter. He believed that color revolutions and the Arab Spring had been instigated by Western governments, and posed a threat to the Russian Federation. His definition reflected his assessment of Western involvement in these events, and particularly in the 2011–2013 Russian protests.

"On the Historical Unity of Russians and Ukrainians" is an essay by Vladimir Putin published on 12 July 2021.

"What Russia Should Do with Ukraine", is an op-ed article written by Timofey Sergeytsev and published by the Russian state-owned news agency RIA Novosti. The article calls for the full destruction of Ukraine as a state and the Ukrainian national identity in the aim of the "denazification" of the latter.

Petr Akopov is a Russian propagandist working for RIA Novosti, a Russian state-owned news agency. Akapov was the author of the pre-maturely published and then retracted article titled "The arrival/attack of Russia and the new world", which was written in advance anticipating the Russian victory in the 2022 invasion of Ukraine. In the ominous article, Akapov announced that "Ukraine has returned to Russia" and condemned "Anglo-Saxons who rule the West" for "attempting to steal Russian land", and asserted that Russian President Vladimir Putin's launch of the invasion resolved the "Ukrainian question" to establish a "new world order" with "Russia, Belarus and Ukraine. Before the news agency retracted the article, it was republished by another Russian state-owned news agency Sputnik and published by the Pakistani newspaper The Frontier Post in English.