RKS Radomsko is a small football club based in the city of Radomsko, in the south of Poland. Established in 1979, the club has played most of it history in the Polish Fourth League, though in 1993, the club advanced to the Polish Third League, and to the Polish Second League in 1995.

RKS Radomsko's most notable achievements include the establishment of international stars such as Jacek Krzynówek, who plays for Bayer Leverkusen, and the very unexpected representation in the Polish First League, in 2001, where they played considerably well in the first half of the season. In 2003 the club made it to the semi-final of the Puchar Polski (Polish Cup), although the club has since hit harder times and, in 2005, experienced relegation from the Polish Second League.

Their biggest rivals are GKS Bełchatów mostly due to the close proximity of the two clubs and many years spent in the same divisions.

Radomskopronounced [raˈdɔmskɔ] is a town in central Poland with 45,843 inhabitants (2019). It is situated on the Radomka river in the Łódź Voivodeship, having previously been in Piotrków Trybunalski Voivodeship (1975–1998). It is the capital of Radomsko county. 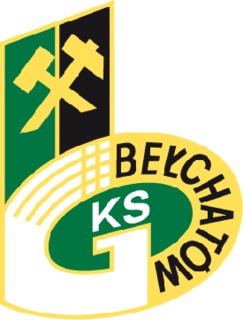 PGE GKS Bełchatów[ˌpɛɡʲɛˈʔɛ ˌɡʲɛkaˈɛs bɛwˈxatuf] is a professional football club that competes in the Polish First League. GKS is an abbreviation for the Miners' Sport Club.

Garbarnia Szczakowianka Jaworzno is a Polish football club based in Szczakowa, Jaworzno, Poland. The club is currently playing in the Polish 3rd league 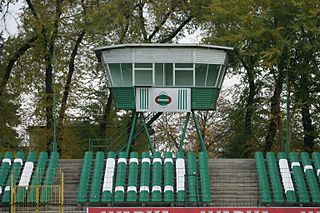 RKS Radomiak Radom is a Polish football club based in Radom, Poland.

Roman Jacek Kosecki is a Polish former professional footballer who played as a striker.

Mirosław Kalita is a coach and captain of soccer team Wisłoka Dębica, Poland. Born July 18, 1970 in Dębica, he started his career in Wisłoka and in 1996 moved to Amica Wronki where he played for three years, winning the Cup of Poland twice. In 1999/2000 Kalita played for Śląsk Wrocław for a year, later joining RKS Radomsko, KSZO Ostrowiec and Resovia. In 2003, he came back to Wisłoka Dębica and has been its captain, coach and best player ever since. He plays in midfield. Height - 179 cm, weight - 70 kg.

Jacek Krzynówek is a former Polish footballer. One of the most glorious moments of his career was scoring a rocket shot against Real Madrid in the 2004–05 UEFA Champions League.

Dariusz Brytan was a Polish footballer, and is now a football trainer in the Polish Premier League.

Sandecja Nowy Sącz is a Polish football club formed in 1910. Up to 1979 Sandecja stadium was named XXV years of PRL at the initiative of the then Communist leaders of the city. In 1998, nine years after the fall of communism in Poland, it was then renamed in honor of Father Władysław Augustynek, a popular local Catholic priest, who was a passionate fan of the club.

Branko Rasić is a Serbian (football striker. He is a trainee of FK Crvena Zvezda. He is 1m 81 cm tall and weighs 79 kg.

Jarosław Lato is a retired Polish footballer (winger). He is not related to Grzegorz Lato. 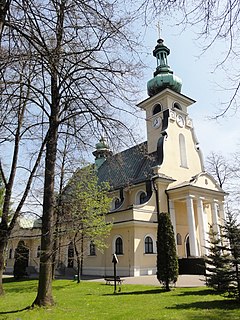 Chybie (help·info) is a village and the seat of Gmina Chybie in Cieszyn County, Silesian Voivodeship, southern Poland. It has a population of 3,903 (2012).

Leszek Ryszard Iwanicki is a Polish former footballer who played at midfielder for Widzew Łódź mostly.

Dawid Banaczek is a Polish former footballer who played as an attacking midfielder or forward and current a football coach.

Mariusz Przybylski is a Polish footballer who plays for RKS Radomsko.

Artur Prokop is a Polish footballer who last played for LKS Nieciecza. He previously played in the Ekstraklasa for Hutnik Kraków, RKS Radomsko and Górnik Zabrze.

STS Sanok is an ice hockey team in Sanok, Poland. The team is playing its first season in the Eastern Division of the Slovak 2. Liga, the third tier of ice hockey in Slovakia. The team was inactive during the 2016-2017 season due to financial difficulties. Before that, the team competed in the Polska Liga Hokejowa (PHL), the top-level hockey league in Poland.

KS ROW 1964 Rybnik is a Polish association football club based in Rybnik. The club was formed in 2003 on the basis of RKS Energetyk Rybnik and traces its roots back to ROW Rybnik's football section, which was founded in 1964, and dissolved in the early 1990s. The club was called Energetyk ROW Rybnik between 2003 and 2015.

Cheikhou Omar Ben Tall, commonly known as Omar Tall, is a Senegalese-born, American soccer player who plays as a midfielder for RKS Radomsko.