The RT-21 was the first mobile ICBM developed in the world.[ citation needed ] Its innovative concept and design were created by Alexander Nadiradze. The RT-21M Pioneer (SS-20 Saber) and succeeding missile complexes relied on the SS-16 base concept and were used by Nadiradze for many of his later projects. The program became mired in a series of treaty complications, including questions regarding its use of theatre missile launchers. It is unlikely that the RT-21 ultimately reached deployment, and by the mid-1980s, the program had been scrapped. Its maximum period of storage on a launcher was 5 years, and preparation time for launch was 40 minutes. [1] 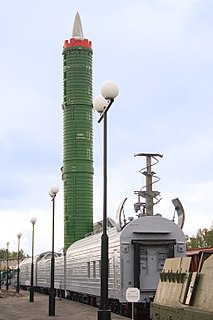 The SS-16 Temp-2s missile was the first attempt by the Soviet Union to develop a mobile ICBM. The missile project was designated SS-X-16 by Western intelligence and underwent several flight tests. The project was cancelled and the last missile firing took place in April 1976.